You are here: Home › Reminder- Tigray Is Still There, And It Isn’t Going Away 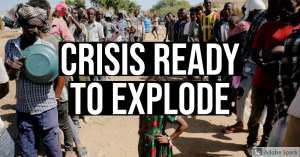 The conflict taking place in Tigray right now is very serious, and as I have warned it could turn into another Bosnia-1994 type situation, but under a Biden presidency, and with a very active NATO presence, much more than what happened with the US in Afghanistan. While the world watches the show with the US and Russia- a serious one likewise -far too little public attention is being focused on Tigray, which is a very serious situation, as reports are silently mounting that Ethiopia and Eritrea committed ‘human rights violations’ and may result in Western intervention.

The United States is looking into reports of human rights abuses and atrocities in Ethiopia’s Tigray region, the U.S. State Department said on Monday.

Department spokesman Ned Price told a news briefing that the United States is “gravely concerned” about accounts last week by CNN and the BBC of a massacre in the region by Ethiopian forces.

“We are, of course, looking into these reports. We have taken close note of them and we’ll continue to pay close attention,” Price said.

“We strongly condemn the killings, the forced removals, the sexual assaults, the other human rights abuses that multiple organizations have reported,” Price added, declining to say who the United States believed was responsible.

Ethiopia, Africa’s second most populous country, is struggling to control several flashpoints where ethnic rivalries over land, power and resources have ignited ahead of national elections scheduled for June.

Price also welcomed an Ethiopian foreign ministry pledge that Eritrean troops would withdraw from Tigray, calling such a withdrawal an important step forward in de-escalation in the region.

Eritrea and Ethiopia denied the presence of Eritrean troops in Tigray for months, despite dozens of eyewitness accounts. G7 countries including the United States called on Friday for a swift, unconditional and verifiable withdrawal of the Eritrean soldiers, followed by a political process acceptable to all Ethiopians.

“The immediate and complete withdrawal of Eritrean troops from Tigray will be an important step forward in de-escalating the conflict and restoring peace and regional stability,” Price told reporters. (source)

Watch Tigray. Trends in that region are just getting started. If things become worse, then not only will there likely be a shooting war, but a major migrant crisis.