You are here: Home › US Economy Sees More Record-Breaking Growth…Because Of Stimulus Checks 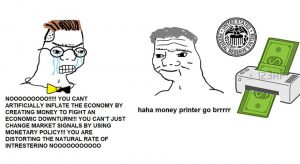 Can you print your way to prosperity? Apparently, the government says it is possible after CNN reports record-breaking economic growth due to the issuing of COVID checks.

President Joe Biden’s $1.9 trillion stimulus package will boost the US economy and drive faster global growth this year, the International Monetary Fund said Tuesday, though it warned that many countries continue to suffer from the pandemic and are at risk of being left behind.

“At $1.9 trillion, the Biden administration’s new fiscal package is expected to deliver a strong boost to growth in the United States in 2021 and provide sizable positive spillovers to trading partners,” the IMF said in a report. Other governments and central banks around the world have also pumped trillions into the global economy.

The IMF said the “unprecedented policy response” to the pandemic means the “recession is likely to leave smaller scars than the 2008 global financial crisis.” The group estimates global output dropped 3.3% in 2020, while the US economy shrunk 3.5%.

There are already signs the US recovery is gaining speed. American employers added 916,000 jobs in March, the biggest gain since August. The US manufacturing sector is also roaring ahead, with the ISM Manufacturing Index recently posting its best reading since 1983. (source)

Now to the credit of CNN, it is true that economic growth is happening, because people are spending money, and the consumption-driven nature of the US economy means spending —> growth. This is correct at a superficial point.

However, the fundamental question is, does printing money drive wealth creation, to which the real answer is no. What the US is doing right now is not ‘helping’ the economy, but rather priming it for a crash, because the artificial printing of money apart from the generation of real value means a loss in the value of the currency itself as a viable means of exchange, which is what causes hyperinflation. This is an economic reality that surpasses culture or place, and is a consistent rule throughout history.

What is going to happen is that eventually the US money printing will cause a serious economic crisis to form, and I as suspect, it will be timed to happen alongside a major political crisis that can be blamed on another nation and used to start a war in order to ‘reset the economy and the US dollar. This is not an accident, and was why there was talk that another Third World War could be faced by the 1960s- in order to preserve the US economic gains made from World War II.

Take a serious look around. No “jobs are being created”, and more businesses are closing, and people are poorer. These economic prosperity numbers exist on paper in a report and are reality for the top 1% of the country, while the bottom 90-99% languishes in debt and misery.

This money is not being printed to help people- to say as such would be to deny history’s experience in the US. However, what is happening today should be a sign for people to prepare for the future and get ready for a major economic crisis, which is coming and will likely dwarf even what is happening today.