You are here: Home › Merkel Calls For Nationwide Lockdowns Over COVID

By Andrew Bieszad on April 7, 2021 in Featured, General 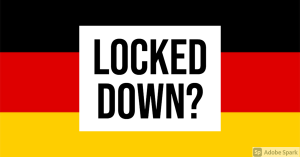 The political shenanigans that began last year with COVID are still continuing, and now German Chancellor Merket is calling for a ‘short national lockdown’ to stop the spread of the virus.

Angela Merkel has called for a ‘short national lockdown’ to curb Germany’s coronavirus crisis just two weeks after she apologised for suggesting a five-day Easter shutdown.

The country is struggling to tackle a third wave of the pandemic and has recorded an average of 15,000 cases every day for the last week – the fifth highest infection rate in Europe.

Chancellor Merkel’s spokeswoman today announced her boss was backing calls from several federal leaders for a short, sharp lockdown as the country tries to vaccinate as many people as it can.

It comes a fortnight after Merkel made a humiliating apology for the ‘mistake’ of trying to impose a five-day Easter lockdown.

‘I deeply regret it, and for that, I ask all citizens’ forgiveness,’ the 66-year-old leader said in a grovelling speech in parliament.

‘The mistake is my mistake alone,’ Merkel added. ‘A mistake must be called just that.’

But today, her spokeswoman, Ulrike Demmer signalled another flip-flop by the Chancellor as she told reporters that a rising number of intensive care patients meant ‘every call for a short, uniform lockdown is right.’ (source)

Germany is the heart or Europe’s economic machine. If she goes, all of Europe goes, and given how lockdowns have been shown to be a direct cause of economic instability and worsening the problems, a ‘national lockdown’ would have the direct effect of worsening the social and economic problems. That is, unless one assumes- as Ted, Walid, and I have been saying -that such is desired, because that would lead to a political crisis that could be exploited. All it would take then is another migrant wave, for example, to really trigger a revival of militarism, which is why I am so concerned about the situation in Tigray, because the region is primed for a major potential wave of migration to Europe as what happened in 2016, but larger.

If Tigray goes, and if Germany does another lockdown, or even a variant of it, such will be a toxic combination that could further a push from not just the political left to the hard right, but a push from political nationalism to militarism and the rebuilding of Germany’s military capabilities, for she has all of the abilities to do this, and it would only take a short while to shift from being a manufacture-and-export economy to a war economy.

Remember the warning of Niklas Frank- Germany is already primed for a revival of National Socialism, and all it would take is ‘five to ten years of heavy economic problems’ to see a revival of her recent past behavior.