You are here: Home › Will A Recent Greenland Anti-Mining Political Party Be A Part Of A Larger Strategy Of Tension?

By Andrew Bieszad on April 7, 2021 in Featured, General 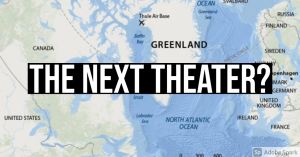 According to France24, the left-wing Inuit Ataqatigiit party won a majority of seats in parliament, and given her situation, may form a coalition with smaller parties to get a majority.

A left-wing environmentalist party opposed to a controversial mining project won a clear victory in Greenland’s parliamentary election, according to results released Wednesday.

With 36.6 percent of the vote, Inuit Ataqatigiit (IA) was ahead of Siumut, a social democratic party that has dominated politics in the Danish territory since it gained autonomy in 1979.

“Thank you to the people who trusted us to work with the people in the centre for the next four years,” IA leader Mute Egede said on KNR public television after the results were announced.

IA, which was previously in opposition, is expected to grab 12 out of the 31 seats in the Inatsisartut, the local parliament, up from eight currently.

But without an absolute majority, the most likely scenario is that IA joins forces with smaller parties to form a coalition.

Siumut, which headed the outgoing government, was partly weakened by internal struggles. It gained 29.4 percent of the vote, still two percentage points higher than its results in the 2018 election.

The dividing line between the two parties was whether to authorise a controversial giant rare earth and uranium mining project, which is currently the subject of public hearings.

The Kuannersuit deposit, in the island’s south, is considered one of the world’s richest in uranium and rare earth minerals — a group of 17 metals used as components in everything from smartphones to electric cars and weapons.

IA has called for a moratorium on uranium mining, which would effectively put a halt to the project. (source)

What makes this party interesting in particular is that she is anti-mining, and according to the story, Greenland has one of the single largest rare-earth mineral mines in the world.

But is this really about environmentalism? Or could there be something much deeper below the surface here?

Rare-earth minerals is one of the trends that I have followed on Shoebat.com, as they are vital for advanced computing and electronics applications that will be used for robotics, which given the current trends, will likely define a winner in the next major war, for just as it was the machine gun that won WWI and the nuclear bomb WWII, he who makes the best robots will win WWIII. In order to make these robots, one needs the components to build them, and these components are made from rare-earth metals.

According to Statista, China has by far the largest public holdings of rare earth minerals, followed by the US, Burma, Australia, Madagascar, and Russia. However, these numbers are most likely not entirely accurate. It is a known fact that in addition to geopolitical location, the nation of Afghanistan sits on an unrecognized $1-trillion worth of rare earth metals. As I reported here at Shoebat.com, the tiny island chain from Japan to Russia, known as the Kirils in Russia or Senkaku in Japan, hold 700 years worth of rare-earth minerals at their current rate of use. There are also many rare earth mines in Africa, stretching from Senegal to southernmost Africa, and Russia herself is said to have massive but unspoken reserves of rare-earth minerals, especially in the Russian Far East (Magadan, Amur, etc.) as well as the Arctic circle.

We know for a fact that Russia and NATO are both militarizing the Arctic Circle region. Both want dominance, and in the case of Russia, she sees it as both a means to build a new economic Silk Road by sea over which Russia would have near exclusive domination as well as due to the extreme cold, is a historical method of self-protection against the possibility of invasion that has worked well for her, and given the severity of the situations she is facing, that may serve has her only chance to save herself.

Greenland came into the news in August 2019 when the Trump administration floated the idea of purchasing Greenland from Denmark, who still controls it. The deal did not work out, but whether it was intended to fail or not is not important. What matters is that the US has taken an interest in Greenland because she is not a part of the US, is technically in North America, and is in the Arctic circle region, and given the competition for global dominance, will come under either US, “European”, or Russian influence. Since the US wants to keep Europe- which is fundamentally Germany and the Germanic nations such as Denmark -in her sphere of influence, she wants to pull Greenland close to her. If she did not do this, then the Russians would attempt to do the same, but by their own means, especially where a power vacuum exists.

We know that the US and Western Europe has a history of using third-party groups or ‘crises’ to justify greater actions. For example, a lot of the anti-Islam movement in the US bore unnaturally close ties to the government, which did not care about Islam, but wanted an excuse to justify military intervention in Middle Eastern nations. How with the push against China, the US is taking a ‘pro-Muslim’ stance in so far as support the Muslim Uyghurs in China, but not because of benevolence, but because she wants to use the Uyghur plight- as well as the plight of Chinese Christians -to justify her anti-Chinese policies. It is the same reason why right now there is a tremendous amount of Christian persecution that gets worse by the day in India, but the US government will not say a word about it, because the US wants to gain favor with India in order to use her against China, and so because Christian persecution is not politically expedient in this situation, will not speak of it.

It is very interesting that the ‘anti-mining’ aspect of this party was what took form as one of the center issues for this party. Now it is yet to be seen what proof the US or European nations may have had in helping this party gain victory, and it is also important to acknowledge that local people are thinking about voting anti-mine because of genuine concern for their communities and the effects it would have on them. However, take the above situation and put in, as I noted, into the context of how Russia is attempting to develop the Arctic circle, which includes mining projects for things such as rare-earth minerals, because like the US, Russia needs them to develop her robots for the next major war.

Could we be looking here at a situation where the US interest in Greenland and now the victory of a major anti-mining party, reported extensively by Western media sources, indicates a stance that the US is going to take a more proactive ‘natives’ rights’ position in Greenland, and the purpose for this is to use the environmentalist cause to obstruct and create justifications for Russian attempts at expanding mining operations in the Arctic?

We already know that Russia has a very long history of serious environmental pollution because of a lack of quality controls, going back to the early Soviet times. Just looking at the destruction of the Aral Sea, the pollution and nickel poisoning of the soil at Norilsk, the nuclear destruction of Lake Karachay and the Kyshtym incident, the Chernobyl incident, the pollution of Novosibirsk resulting in “green snow”, and not to mention the many other disasters throughout the Russian landscape means that, from a strict trends view, any Russian involvement in the Arctic will likely lead to potentially serious pollution problems. In this case, it is ideal to exploit this tendency through using a ‘environmental friendly’ political party as a shield by the US and NATO to attack Russian interests in the Arctic.

Now this is all speculation, and more details will be needed to prove this definitively. However, from a trends viewpoint, and with some critical reasoning, it is not hard to see how such a situation is, perhaps, more possible that many can even imagine.