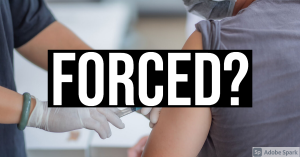 The COVID vaccines have been a source of controversy for many people, as there are many who support it and many who do not, and both attempt to bring, at least for their individual purposes, well-meaning concerns about everything from the spread of disease to the subjugation of individual choice and personal rights. If we take the most positive approach, then for the case of the common man, most people who have a position on this are at least, on a surface level, attempting to have good intentions.

According to Barrons, however, things may become interesting as the European courts have ruled in favor of compulsory vaccinations against COVID.

The European Court of Human Rights ruled on Thursday that obligatory vaccinations can be seen as necessary in democratic societies, in a landmark judgement after a complaint brought by Czech families over compulsory jabs for children.

This is the first time that the ECHR has delivered a judgement about compulsory vaccination against childhood diseases.

Experts say it could have implications for any policy of compulsory vaccinations against Covid-19.

The Czech cases were lodged between 2013-2015, well before the current pandemic.

“The… measures could be regarded as being ‘necessary in a democratic society'” the court ruled, saying that the Czech health policy was consistent with the “best interests” of children.

“The objective has to be that every child is protected against serious diseases, through vaccination or by virtue of herd immunity,” it added.

As a result, the court ruled there had been no violation of Article 8 on the right to respect for private life of the European Convention on Human Rights.

The decision was by the court’s Grand Chamber and cannot be appealed.

Pursued legitimate aims
This judgement “reinforces the possibility of a compulsory vaccination under conditions of the current Covid-19 epidemic,” Nicolas Hervieu, a legal expert specialising in the ECHR, told AFP.

The judgement endorses “the principle of social solidarity which can justify imposing vaccination on everyone, even those who feel less threatened by the disease, when it comes to protecting the most vulnerable people,” added Hervieu, who teaches at Sciences Po in Paris.

In the Czech Republic, there is a general legal duty to vaccinate children against nine diseases, including diphtheria, tetanus, whooping cough, hepatitis B and measles.

The case had been filed to the ECHR by Czech parents who were fined for failure to comply with this vaccination duty or whose children were denied admission to nursery school for the same reason.

The applicants had alleged that the consequences of non-compliance was incompatible with their right to respect for their private life.

The court said the obligatory vaccination policy was “in a reasonable relationship of proportionality to the legitimate aims” of the Czech state. (source)

On a personal level, the COVID vaccinations concern me because they are (a) for all practical purposes using human beings as guinea pigs for testing due to the unstudied nature of the vaccines and their potential effects and (b) are tied to clearly politicized motivations that do not seem to respect the choice of individuals to agree or disagree with taking said vaccine.

No one really knows what the long-term health effects of this will be. However, what can be said is that the virus, as I noted before, is serving more of a purpose to polarize people against each other before being a concern into itself.