You are here: Home › US Population Growth The Slowest Since 1918 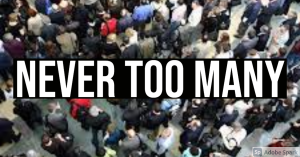 According to a report from BloombergQuint, the US population has grown at its slowest rate in over a century, owing largely to declines in immigration as a result of the effects of the COVID pandemic.

Since the Declaration of Independence in 1776, the population of the U.S. has dropped only once, in 1918, when more people died from the Spanish flu than from war wounds on the battlefields of Europe. The second lowest year for population growth? Probably this year, 2021.

An April 7 research briefing from Oxford Economics estimates that the U.S. population will grow just 0.2% this year, after growth of just 0.4% last year. Those are the lowest numbers in U.S. history with the exception of the population shrinkage of about 0.1% in the pandemic year of 1918.

Behind the slowdown are the Covid-19 pandemic and a dropoff in immigration, which is partly because of Covid and partly the consequence of Trump Administration policies. Population growth should pick up speed in 2022 and beyond because the pandemic will end and the Biden Administration and Congress are likely to reverse some of the Trump-era restrictions, Oxford Economics says.

“We estimate that [immigration] fell to 341,000 in 2020, and we expect it will decline to 180,000 in 2021 before starting to recover. We look for immigration to return to about 1mn [million] annually by the end of the decade,” says the briefing by Nancy Vanden Houten, Oxford Economics lead economist.

To her, a rebound in immigration would be a good thing. “Given slower growth in the native-born population–and the aging of the U.S. population–steady immigration levels will be key to maintaining growth in the labor force in the years ahead,” she writes. The Population Reference Bureau came to a similar conclusion early last year, before the pandemic. “In the long term, slower population and household growth could negatively affect the future U.S. economy by reducing the supply of workers, the tax base, and the demand for goods and services. This slowdown could also reduce demand for new home construction and lead to declines in home values,” it wrote.

Before Covid hit, the white population of the U.S. fell from 2010 through 2019—albeit by a minuscule 16,612 people, according to the Census Bureau. “If this trend is confirmed with the full 2020 census, the 2010-to-2020 decade would be the only decade since the first census was taken in 1790 when the white population did not grow,” Brookings Institution senior fellow William Frey wrote in January. (source)

The US has a long history of eugenics. It almost does not matter what the people, but the US is known to actively encourage anti-fertility measures, and while the blatant “Eugenics Societies” that existed do not have the open, direct presence they once had, they arguably have become more skillful in conveying their message through indirect means. Call it ‘environmentalism’, ‘saving the planet’, ‘overpopulation’, ‘living the good life without children’, or any number of other terms, the US has shown a consistent pattern of wanting to reduce fertility rates, arguably because large populations are more easily controlled and maintain the political status quo with less effort, for large or growing populations can more easily stand up to governmental abuse, can more easily separate from a government, and also have the ability of colonizing areas. Remember that the settling of the ‘new world’ by Western Europe did not happen because of a population decline, but population expansion, and in pursuit of opportunity, peoples from Enland, France, Portugal, Spain, Holland, and many other nations went overseas.

This is also the reason why migration is happening in all countries, even Japan, because without populations at a growing or stable rate, nations begin to die and become susceptible to invasion, let alone the more pressing task of getting basic work done that has to be done. The world needs not just CEOS, but people to clean the streets, maintain the plumbing and electrical systems, build the tools, farm the fields, and do the basic work that makes up a society.

The US will most likely be OK, even with a decline in population, because she historically and with generally greater ease receives immigrants to compensate for her fertility issues that she promotes. Other countries may find it harder, for all of Europe (the Germanic and Slavic nations alike) and much of east Asia (including China and Japan) suffer from declining populations, and not surprisingly, many are receiving large numbers of African immigrants, not because of an African ‘invasion’, but the same reason as I noted above with Europe- large numbers of children lead to natural population diffusions, and with them come political changes.

The twenty-first century is, as in the past, appearing to become another interesting century as migration once again will be a major trend that reshapes, perhaps in surprising ways, the makeup of nations.

“I can’t breathe!” — George Floyd had a high dose of fentanyl and it cuts off your breathing
Report: European Court Rules In Favor Of Forced COVID Vaccinations
Follow