You are here: Home › Convicted Israeli Spy Jonathan Pollard Declares In Shocking Interview “If We’re Jews, We Will Always Have Dual Loyalty”, “Loyalty To Your Fellow Jews Is More Important Than Your Life” 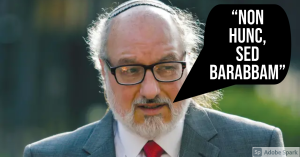 Sometimes there are interviews or discussions with people that are so direct, so candid, so frank, that they are surprising. They are uncommon, but they do exist.

Such recently happened with convicted Israeli spy against the US Jonathan Pollard, who after being deported to Israel recently gave a shocking interview reported by the Jerusalem Post in which he said that Jews “will always have dual loyalty”, and that “loyalty to your fellow Jews is more important than your life.”

Jonathan Pollard, the convicted spy for Israel whose story haunted the American Jewish community’s relations with the US government for decades, is unrepentant.

“The bottom line on this charge of dual loyalty is, I’m sorry, we’re Jews, and if we’re Jews, we will always have dual loyalty,” Pollard said in an interview published Thursday in Israel Hayom, his first extensive remarks since his release from prison in 2015.

Pollard recalled how much of the Jewish leadership did not stand up for him following his 1985 arrest, when he was a civilian analyst for the US Navy who was found to be spying for Israel.

“If you’re outside Israel, then you live in a society in which you are basically considered unreliable,” he said.
The US Jewish leadership eventually softened in its outlook, and some Jewish leaders lobbied for Pollard’s release, saying his life sentence was excessive.

Pollard’s full interview will be published Friday. In an earlier excerpt published by Israel Hayom, he said he knew he “crossed a line” when he relayed the information to Israel, but added that he believed the United States was withholding from Israel intelligence critical to its security.

Pollard’s arrest and eventual conviction complicated ties between US Jews and sectors of the government. Jews seeking entry into or advancement in the national security apparatus were often rebuffed, with Pollard cited as the reason. The Pollard narrative in part drove the espionage charges brought in 2004 against two top staffers for the American Israel Public Affairs Committee — a case that fell apart but drastically changed how AIPAC operated.

Pollard suggested that Jews were deluding themselves if they thought of America as a home and suggested he would counsel a young US Jew working in the American security apparatus to spy for Israel.

Pollard was paroled from his life sentence in 2015. The terms of his parole were not renewed last year and he flew to Israel, where Prime Minister Benjamin Netanyahu greeted him at the airport. Sheldon Adelson, the late owner of Israel Hayom, provided a private plane for Pollard to fly to Israel. (source)

One of the points that Ted, Walid, and I have tried to emphasize is balance. Loyalty is a good thing, but it cannot come at the cost of truth or moral right. This is the grave error that resulted in the murder of Christ- this concept of “loyalty” to “the tribe” was valued as being more important than Truth itself, which resulted in the Jewish leaders choosing to murder the Messiah and release in his place a known criminal and revolutionary, Barabbas, because Christ said that to be a Jew is not a blood tie to a certain group, or the belief in the supremacy of a certain group, but to accept the teachings that God revealed through the groups but which are meant for the whole world. Thus a Jew in the true sense is not just members of the tribe of Judah by blood, but it could be a Roman named Cornelius, an African named Bachos (the Ethiopian Eunuch in Acts 8), or a man of any race, tribe, and tongue, for God came to save the human race, and the true chosen people are those who choose to love God and serve Him as He desires that He is to be served. While nations, races, and tribes are good, God does not favor them except to the extent they obey His commands as above, for God did not create some men to be the playthings of other men in a darwinistic struggle between groups lasting forever, but rather He came to put an end to the darwinistic cycle of revolution caused by Original Sins. Thus there would be many peoples, many races, many differences, but bound by one Lord, one Faith, and one Baptism under the Empire of Christ over which Christ is Lord and King, Who bows to no one and to Whom all bow to Him. This is the true march to freedom, prefigured by the return from the Babylonian exile of Judah, and perfected by Christ.

Thus to be a Jew, in the fullest sense, is to embrace the end purpose for which Judaism existed, and that is the Messiah, who came and will come again not as a baby, but in full power and regal glory to give justice to the wicked and succor to the suffering.

Thus it is the reason why such a conflict exists still in what is called Judaism today, for if Christ truly is the Messiah, and He is, and one does not recognize being a Jew as anything more than a common ethnic designation (in the sense that one might say one is “American”, “German”, “Chinese”, or so on, then it necessarily must embrace something of the moral or philosophical errors of post-crucifixion Judaism, which instead of marching out of Babylon with Christ, rejects Him, and necessarily claims the trial and crucifixion was just and thus marches right back into Babylon and crowns oneself king of the city.

If one calls such a statement “anti-semitic”- somehow equivocating parasitic, evil behavior that must be called out in any group with racial animosity in an attempt to reframe an argument in order to nullify discussion of the matter -then what is one to say of the many passages in the Old Testament where God Himself expresses rage at the Hebrews and later, tribe of Judah for endless sins without repentance until disaster strikes, and even then having only some repent? One might venture to say that under such terms, the very Creator is an “anti-semite” because of the criticism He gives.

This concept that Pollard is expressing in this interview is not something new. It is something that is as ancient as the Old Testament, it was hated by the prophets and holy men of old who suffered and died for sake of opposing it, and finally was the reason why God Himself, when sent to save His people, was murdered by them, because this idea of ‘racial solidarity’ was even more important than God Himself.

For all the criticism that one can give Pollard, one must thank him for his honesty, as his words may be painful for many, but are also the truth.