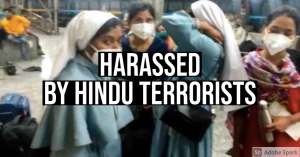 While the world watches China with horror, far too many continue to ignore the growing crisis in South Asia, where Hindu nationalist terrorists, with the direct consent and even assistance of the Indian government, are harassing Christians and engaging in open persecution.

In a story out of northern India and reported on by UCA News, three Hindu nationalist terrorist have been released on bail following accusations of harassing several Catholic nuns.

A court in the northern Indian state of Uttar Pradesh has granted bail to three Hindu activists accused of harassing two Catholic nuns and their students.

They were granted bail on April 7 by Jhansi District Court and must attend another hearing on April 22.

Two nuns of the indigenous Sacred Heart Congregation and two postulants were forced to get off a train in Jhansi on March 19 after the nuns were accused of conducting religious conversion.

According to officials in Jhansi, they were detained after right-wing Hindu activists gave a written complaint that two women were being taken forcibly for religious conversion. Uttar Pradesh has a law that aims to curb religious conversions done by force and fraudulent means.

However, the nuns were allowed to continue their journey after an inquiry at the railway station established that there was no conversion involved. Police said there was no basis for the complaint and all four women took the next train to their destination in Odisha.

The decision to grant bail to the the three Hindu activists brought a mixed reaction from Catholic figures. (source)

An unfortunate story, but not a surprise.

Based on current trends, India is plowing full speed ahead towards a genocide of her Christian population. The warnings have been around for years, and so few have paid attention to them. The fact is, the government of India largely gives full support to Hindu terrorism against Christians, and they are using it to build their own clout as part of a philosophical-religious-political vision they have for India’s future, a part of which means ‘purging’ out those considered ‘undesirable’, and Christians are one of the first peoples on the block to be targeted.