You are here: Home › US Navy Quietly Conducts Exercises Off The Coast Of Southwestern India 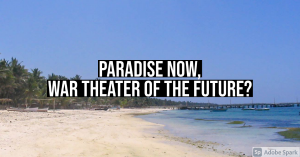 While the world is paying attention to larger events, a small story that has received little discussion is a recent series of US Naval exercises conducted off the southwestern coast of India in the Lakshadweep Islands.

In a highly unusual move, the publicly declared it conducted “freedom of navigation operations” in India’s Exclusive Economic Zone (EEZ) near Lakshadweep earlier this week, without deliberately seeking New Delhi’s prior consent, drawing an Indian response that the American warship was “continuously monitored” and concerns were conveyed to the Biden administration.

The strongly-worded nature of the US Seventh Fleet statement was evident as it said India’s requirement of prior consent is inconsistent with international laws and the “freedom of navigation operations (FONOPs)” was intended to challenge its “excessive maritime claims”.

Coming close on the heels of a Quad summit hosted by President Joe Biden, which was seen as strong strategic convergence among the US, India, Japan and Australia, the American naval deployment raised more than a few eyebrows.

“India requires prior consent for military exercises or maneuvers in its EEZ or continental shelf, a claim inconsistent with international law. This FONOP upheld the rights, freedoms, and lawful uses of the sea recognized in international law by challenging India’s excessive maritime claims,” the US Navy statement said.

Responding to the provocative statement issued by the US Seventh Fleet, which incidentally undertook gunboat
diplomacy against India during the 1971 war, the external affairs ministry on Friday said, “India’s stated position on the United Nations Convention on the Law of the Sea (UNCLOS) is that the convention does not authorise other States to carry out in the EEZ and on the continental shelf, military exercises or manoeuvres, in particular those involving the use of weapons or explosives, without the consent of the coastal state.”

“The USS John Paul Jones (US guided missile destroyer) was continuously monitored transiting from the Persian Gulf
towards the Malacca Straits. We have conveyed our concerns regarding this passage through our EEZ to the US government through diplomatic channels,” added the MEA.

The US — which has not ratified the UNCLOS unlike India, China and many other countries — does regularly conduct FONOPs in the contentious South China Sea to challenge China’s aggressive territorial claims as well as in other areas including the Indian Ocean Region. (source)

It is impossible that India did not know about this well before. Likewise, it is also very likely that, while the Indian government will not publicly admit this, she fully consented to these exercises.

The US has been building close alliances with India for over a decade due to the threat of a coming global conflict that most likely, among other issues, will put the US against China in the Asian theater. It seems that a part of US strategy is going to be to use the Indians against the Chinese, and is why she is backing them as well as conveniently ignoring real Christian persecution in India, but will talk about it in China, because the latter is politically exploitable while the former is not.

Whether or not India will become a stronger naval power is something yet to be seen. She already has a long naval history, and so she could potentially, with some development, build up her presence in the Indian Ocean more than what it already is.

Also, notice the important emphasis on freedom of economic movement. This is a point I have said before that is a cornerstone of US as opposed to Russian policy and power grabs. The US prefers to conquer by economic influence, so that people on all sides make money and have better lives, and in doing so can better win public approval and long-term support. The Russian approach tends to be to grab power first, but not do a lot of economic development, and in doing this, tends to make people angry, because if one is going to be dominated by another country, at least with the US, one becomes wealthier, more comfortable, and has more fun things to use, as opposed to becoming poorer, less comfortable, and with fewer fun things.

The move here might be seen as a ‘three-in-one’ approach- maintain US hegemony over the seas, build up her influence with India, and maintain the economic machine that she uses to keep the global power balance shifted to her favor.