You are here: Home › Will The US Send Warships To The Black Sea? 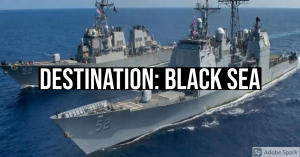 The situation between Russia and the US has for over a century not been on good terms, but right now the two nations are closer than they have been since 1960 to conflict.

While I do not suspect that a major war will happen from such a potential conflict yet, although it is certainly a real and serious possibility, the situation continues to deteriorate. According to CNN, there is talk that the US may send warships into the Black Sea.

The United States is considering sending warships into the Black Sea in the next few weeks in a show of support for Ukraine amid Russia’s increased military presence on Ukraine’s eastern border, a US defense official told CNN Thursday.

The US Navy routinely operates in the Black Sea, but a deployment of warships now would send a specific message to Moscow that the US is closely watching, the official said.

The US is required to give 14 days notice of its intention to enter the Black Sea under a 1936 treaty giving Turkey control of the straits to enter the sea. It is unclear if a notice has yet been sent.

The Defense official also said the Navy is continuing to fly reconnaissance aircraft in international airspace over the Black Sea to monitor Russian naval activity and any troops movements in Crimea.

On Wednesday, two US B-1 bombers conducted missions over the Aegean Sea.

Although the US does not see the amassing of Russian forces as posturing for an offensive action, the official told CNN that “if something changes we will be ready to respond.” Their current assessment is that the Russians are conducting training and exercises and intelligence has not indicated military orders for further action, the official said, but noted that they are well-aware that could change at any time. (source)

It will be very interesting if the US does this, because if she does, it would be a huge and direct hit to Russia’s projected global image of power.

If one wants to get to the Black Sea, there are many major chokepoints. If approaching from the Atlantic, one must navigate the whole length of the Mediterranean Sea. If approaching from the Indian Ocean, it is the Red Sea and the Suez Canal. When both reach Turkey, however, one must navigate the Dardanelles, then Sea of Marmara, and finally the Bosporus, before reaching the Black Sea.

The Dardanelles was the notorious scene of the failed Dardanelles Campaign, and the Bosporus is the world’s narrowest international shipping lane.

Unless one is looking to attack Istanbul, one does not send warships into either the Dardanelles, Bosporus, or Sea of Marmara without Turkey’s permission. For all of the fighting between Turkey and the US, the two have a long relationship going back to 1887, with the US consistently helping Turkey, and for all of the Turkish issues with the US, she is not about right now to turn against the US that rebuilt her into having the potential to revive her empire.

This right here highlights the exact problem I have been pointing out about Russian Naval power- the Black Sea, while strategic and the site of one of three year-round use sea ports for Russia, is confined to that region because of Turkey’s location. Turkey knows this, and can and will use it to her advantage, and since while she will work with Russia she also hates her historically speaking, when the possibility of war comes, it is not much for Turkey to simply shut down the Bosporus and lock Russia out of access to the Mediterranean. That is, unless Russia wants a war with Turkey.

This is also the reason why Russia is going to the Arctic Circle and is working on an all-sea passage from Murmansk to Chukotka, with the idea of sealing her control over the Arctic, setting herself up to claim other lands such as Svalbard, and even possibly parts of Greenland, as well as creating a passage to the Far East through the Bering Strait.

It will be interesting to see what happens in Ukraine, but this conflict seems to me to be more about testing Russia’s active military capabilities against her words. Russia can parade weapons, talk big, and bluff as she wills, for she is the undisputed champion of it, but the US is attempting to call her bluff, at least in part. To an extent, it seems to be working, as reports are that Russia has been forced to pull troops and resources from Siberia to re-station them on the Ukrainian border.

Siberia is a large place, but if Russia is pulling troops from so far away for such a regional conflict, what does that possibly say about the state of her military, and perhaps her logistics or resources? If the US can send ships to the Black Sea, what does that say about Russo-Turkish relations?

There are a lot of questions here, and things do not look good for the Russians, either in the short or long term.