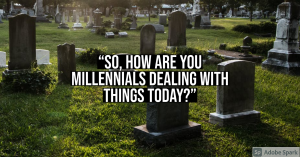 Millennials have been under a lot of stress for a long time. Between two of the worst recessions in history, approaching two decades of horrendous economic conditions, the decline of family life, no real future, and a large amount of hopelessness, many are not sure what is going to happen to them. I have predicted there may be a suicide epidemic, especially among the women, that starts to take shape with them. However, an interesting report may show signs of self-destruction already taking place among Millennials, as they are now suffering elevated levels of stroke and heart failure.

Generally, heart failure and stroke is much more common in older adults than younger individuals. However, an unsettling new study reports more and more younger adult men under 40 are experiencing both.

Conducted by researchers from the University of Gothenberg, this research also discovered a link between these higher rates of cardiovascular disease and obesity or low fitness levels as a teenager.

This was a large study, encompassing 1,258,432 men with an average age of 18 who served in Sweden’s military between 1971 and 1995. Each participant’s weight, height, and fitness level upon enlistment was merged with data from Sweden’s national health records between 1991 and 2016. This allowed study authors to effectively monitor the group’s health outcomes for more than 20 years.

Between 1971 and 1995, the percentage of new military recruits with a BMI between 25 and 30 increased from 6.6 percent to 11.2 percent. During that same period, obese enlistees (with a BMI over 30) also increased from one percent to 2.6 percent. Overall fitness levels also declined somewhat during those two-plus decades.

“These factors — that is, overweight, obesity and low fitness — partly explain the large increase in heart failure we see in the study, and the rise in stroke as well,” states first study author David Åberg in a university release. (source)

Given the increased financial stress that one sees people under, it may be that this trend continues to increase, and people start rather literally dropping dead from the stress of life, work, and their increasing inability to service their debts and deal with the other stresses of life.

US Navy Quietly Conducts Exercises Off The Coast Of Southwestern India
Will There Eventually Be A Racially Biased System Of Taxation In The US?
Follow