You are here: Home › Russian Government Opens Archives For Documents On Stalingrad Siege 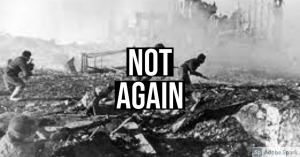 In a story out of Newsweek, the Russian ministry of Defense released a series of documents from its archives detailing National Socialist atrocities committed at Stalingrad.

Russia’s Ministry of Defence has published online a cache of declassified documents detailing atrocities carried out by Nazi soldiers and officers during World War Two.

The release on Friday on the defense ministry’s website comes two days before the International Day of the liberation of Nazi concentration camps on April 11—the day in 1945 when prisoners in Buchenwald, Germany were freed.

The material from the ministry’s central archives includes photographs and letters. Among the revelations are details of a prisoner of war camp near Stalingrad—present-day Volgograd, the scene of the battle between the Soviet Union against Germany and its allies which ended in February 1943.

One document describes the Alekseevka camp in the Gorodishchensky district of the Stalingrad region, surrounded by barbed wire, where 1,500 members of the Red Army had been “brutally tortured,” according to excerpts published by RIA Novosti and other Russian news agencies.

Among the violence detailed are accounts of how prisoners were pushed to the brink of exhaustion by the Nazis and descriptions of burnt and mutilated corpses.

Other documents describe the conditions faced by Soviet prisoners of war at a camp in the city of Demyansk, now part of the Novgorod region, which held around 13,000 people by the end of 1941 and was so crowded that many had to sleep while standing.

Other material includes witness accounts of Nazis executing more than two dozen families from the village of Tenitsa in the Chernihiv region in February 1943. There are also accounts of atrocities carried out in concentration camps such as Auschwitz.

The defense ministry, which has been declassifying WW2 material over the last few months, said the latest material’s publication was “aimed at preserving and protecting historical truth” as well as “countering falsifications of history.”

Underneath the banner of its website which has the message “they cannot be forgotten” the ministry says the documents testify to “the indescribable atrocities, bullying and mass destruction of the occupied peoples by the fascist invaders.” (source)

It is an interesting report, and not doubt released because of the current situation in Ukraine, where Russia and NATO may find themselves in conflict again. As I have noted, this is largely related, it seems, to the historical struggle for the oil regions of the Volga basin, and was the reason for the Battle of Stalingrad, where the Second World War was decided. It is not an accident this happened.

Years ago, I knew one man well who personally served in the Soviet army, but not at Stalingrad. According to this man, who was originally of Hungarian extraction, said that in the Soviet military, all soldiers had guns, but ammo was the problem, as soldiers were often undersupplied, and many times, had none at all. He remembered that sometimes the soldiers would laugh morbidly at this fact, because none believed they would survive. His experience was that while many were forced, a great number did it because they believed, with good intentions, in fighting for their homeland. The feelings about Stalin were mixed, but they became worse with time because many felt betrayed and sent to their deaths. Military leadership was often abusive, and commanding officers would threaten to shoot and even act on their threats towards soldiers who expressed even slight displeasure.

However, to pacify the men, what was given freely to them and in unlimited quantities- far more than bullets -was alcohol. He said that many times, they were paid in alcohol because they were told the government did not have enough money. Drunkenness was a huge problem, and it affected the fighting of their soldiers. He recalled one story of a large, burly Russian soldier with blonde hair who one night before going out became particularly drunk and cried like a small child about wanting to go home. He said he did not see him again, but asked what happened and was told that he was killed in battle.

This individual was captured by the Reich, and eventually forced into a work camp, where he was able to survive until the war ended, at which time he immediately defected to the US, fearing that he would be put to death or sent to a camp as a ‘traitor’ if he returned to the USSR, since such was an all too common practice for Soviet POWs in German camps.

I mention this story because the situation, no matter what the side is, is absolutely evil. Between a choice of two evils there is no ‘good’ side, and both are dangerously close to repeating the history of the 20th century again, but with more terrifying weapons.

Due to the opaque nature of Russian defense and military documents, how much of these documents are true or false is yet to be determined, but it is likely that most of what is being told is indeed true, for they are a historical reminder of what happened to Russia during those years, and what she fears a repeat of, and is trying to remind the world of again before the same repeats.

Will There Eventually Be A Racially Biased System Of Taxation In The US?
George Floyd Was Not Murdered. The Man Who Did The Autopsy On George Floyd Concludes: Drugs And Bad Heart Contributed To Floyd’s Death, Not Chauvin’s Knee
Follow