You are here: Home › Turkey Plans Massive New Canal Through Istanbul As Part Of Her Attempts At Revival 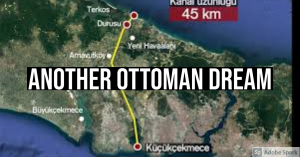 The development of new water-based trade routes from the governments of the world is gong to be something to watch. Much of my focus recently has been on Russia, since her claims to an arguable majority of the lands and oceans of the Arctic Circle region is the largest and most highly contested of such projects. However, this is not the only project to watch. Another area of development is going to be in Turkey, where Erdogan is working on the Istanbul Canal. This project is attempting to serve as an “alternative” and supplement to the Bosporus, which is the world’s narrowest shipping canal, and thus by the construction of this new canal, can help speed up water-based trade between Turkey and other nations.

The huge canal on the edge of Istanbul linking the Black Sea to the Mediterranean will help strengthen Turkey’s hand in the global arena and boost its activity, Transport and Infrastructure Minister Adil Karaismailoğlu said Monday, once again rebuffing critics of the waterway project. “Kanal Istanbul is a strategic issue above everyday politics and is a must for Turkey’s future,” Karaismailoğlu told reporters in Istanbul. “With Kanal Istanbul, Turkey will further increase its power and effectiveness in the world.”

Turkey is pressing ahead with the project and President Recep Tayyip Erdoğan last week said they would push on with the plan “whether you like it or not,” referring to criticism from opposition parties and other opponents over its cost and environmental impact, and added that the canal would be a “new windpipe” for the region.

The Kanal Istanbul project will connect the Black Sea north of Istanbul to the Marmara Sea to the south and is estimated to cost over TL 75 billion ($9.2 billion).

The government says it will ease traffic on the Bosporus Strait, one of the world’s busiest maritime passages, and prevent accidents similar to those in previous years and the recent incident on Egypt’s Suez Canal, where a giant container ship became lodged and blocked the channel for almost a week.

Karaismailoğlu described the canal as an ideal waterway that has been designed to circumvent potential problems, calling it a visionary logistical project.

Critics have challenged the need for the waterway, saying it could affect Istanbul’s natural habitat and water resources.

The number of ships passing through the Bosporus has dropped over the last decade, yet the size of the vessels and their loads have increased significantly.

The government has long drawn attention to the heavy traffic in the Bosporus Strait and the extended waiting times in Istanbul to use the passage.

Karaismailoğlu has said that ships today wait close to 14 hours on average to pass, a figure that could rise to as much as 48 hours in the coming years.

The 45-kilometer (27.96-mile) canal will be built in Istanbul’s Küçükçekmece-Sazlıdere-Durusu corridor.

What Erdogan is doing here, as he hopes, will speed up the shipping times and eventually, development of Turkey as a whole. As others have noted, Russia is not pleased with Erdogan’s vision, since the Russian “northern sea passage” is an attempt to bypass the Suez Canal, as she herself has explicitly noted, as well as attempt to give Russia control over more of the seas, since while she has a large land mass that she dominates, her seapower is greatly lacking. It will be interesting to see how Germany responds, as well as the US, to Turkey’s new canal.  The Jamestown Foundation, which is the same group that reported on the Decline of Russia Project, has also noted US interests in the development of this new canal.

Thus a trend to look at for the future is going to be not so much the development ,but a combination of development and reconfiguration of trade routes between nations.