You are here: Home › China Creates Digital Currency That Expires 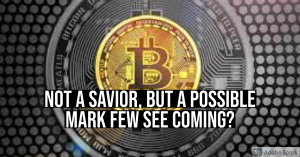 What is the future of money and trade? Some people are very excited to promote “Crypto” as the future, but those who are watching it carefully should be less optimistic.

There is no doubt that crypto will have a place. It has had one since 2008, and it will continue to grow. However, people thinking that crypto will solve their problems are either overly optimistic or display ignorance of basic financial reality. It is true that the current financial system is based on a paradigm of money tied to nothing other than the belief that people have that it is valuable.

Many say that crypto solves this problem because it is ‘tied to the blockchain’, and if there was ever a more ignorant statement that could be made, this is one of them. What does the value of crypto come from? It comes from the value that people believe in it as valuable, because it has no physical source from which its value derives. For example, gold is valuable because the metal itself has value, just as land is value because it comes from the thing- its existence is the value because the thing cannot just be destroyed by a lack of faith in it. Just as there were Dutchmen who upon arrival to southernmost Africa were shocked at the diamonds that lay in the stone practically on the ground and which the local natives seemingly placed no value it, such did not destroy the value of the diamonds themselves because one group of people did not care for them, because the value was in the diamond itself as a thing, no matter who the people there could be.

If crypto sounds a lot like “fiat” currency, you are correct, because it is a fiat currency, just with a computer in one’s home. Crypto also only exists if access to electricity exists. Turn off the electricity, and all the value disappears. However, take a lump of silver, or an ingot of copper, throw it in the ground for a century, and when somebody finds it a century later, it still has value because the value comes from the thing itself. Another big problem with crypto is the blockchain, which records as a permanent, irreversible, public record that can be accessed with essentially a decoding key- which law enforcement has access to -all transactions that the currency makes, what it was for, how much, when, and what location.

If one is not alarmed by this, one should be, because for all the talk of ‘decentralization’, crypto provides more centralization and control in that all transactions are recorded, never erased, and able to be viewed. Privacy, while difficult enough with a credit card, is absolutely nonexistent with crypto. Worse, given the increasing tendency to refuse to grandfather in actions when passing laws, it provides a searchable, traceable record for law enforcement to potentially engage in ‘retroactive prosecution’ of people. As one of many possible examples, say a person bought a certain gun part that later on is banned. The blockchain could be theoretically searched and people who bought that part could receive letters or even possibly be put under suspicion even leading to investigation for something they purchased not even recently, but because of the permanent nature of the blockchain, decades ago and while it was still legal to own, or perhaps does not own any more.

However, a recent news story adds another layer to crypto and the whole concept of digital currency that even surprises me, but not surprisingly at the same time. China is now going to move forwards with issuing her own digital currency, but have some of the currency contain a built-in code that it will expire- as in if one does not spend the money, one loses it.

[The digital yuan is] also trackable, adding another tool to China’s heavy state surveillance. The government deploys hundreds of millions of facial-recognition cameras to monitor its population, sometimes using them to levy fines for activities such as jaywalking.

A digital currency would make it possible to both mete out and collect fines as soon as an infraction was detected. A burst of cash-accumulation in China last year indicates residents’ concern about the central bank’s eye on every transaction. Song Ke, a finance professor at Renmin University in Beijing, told a recent conference that China’s measure of yuan in circulation, or cash, popped up 10% in 2020.

Then there are the myriad boosts to China’s ironclad capital controls: While China hasn’t published final legislation for the program, the central bank says it may initially impose limits on how much digital yuan individuals can keep on their person, as a way to control how it circulates and provide users a dose of security and privacy. To be sure, none of this is actually new as we have discussed all these nuances of the digital yuan before.

What is now, is this blurb in the WSJ article: The money itself is programmable. Beijing has tested expiration dates to encourage users to spend it quickly, for times when the economy needs a jump start.

And there you have it: the Keynesian wet dream to boost the velocity of mean finally comes true. For the past decade we have joked that it is only a matter of time before central banks slap on an expiration date on every monetary unit in circulation… (source)

This is, in my personal opinion, the absolute most scam-filled part of the whole system. It proves that not only is such a thing potential, but that it can and will be done by governments. If money can ‘expire’, it is not possible to accumulate unless one communicates it into something that has non-expirable value. For example, milk and meat expire, but land does not. How can one save anything? What is the point of savings if one’s money is going to be taken from one by force? It is difficult enough for many people to earn money, or to save it, to manage it, and to prevent its loss. Adding this to it would create a state of perpetual impoverishment, and absolute fiscal and by extension, political control over men’s lives, for economic control always precedes political action.

People talk about a ‘mark of the beast’, and the creation of a financial system in which one cannot buy or sell without the mark. While not wanting to assume anything, the invasive, controlling, and potentially deadly nature of digital currencies may provide, in some way, a further realization of this than has ever before existed yet in recent or past history.

India Concerned As China Plans Superdam In Himalayas
Biden Reverses Trump Germany Withdrawals, Builds The Right Back Up As US And Germany Sign New Agreements
Follow