You are here: Home › India Concerned As China Plans Superdam In Himalayas 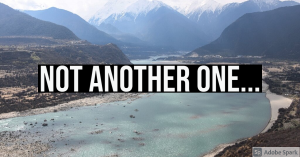 One of the future areas of conflict is going to be the Himalayas, as China and India battle it out for domination. One of the important things that the Himalayas offers is water, and control over water rights for drinking, and considering that both nations are one billion-strong each with desperate needs to simply feed their people and maintain regional power, there is going to be a lot of competition. Now according to France24, China is planning for a superdam in the Himalayas, that in the name of power generation would most likely shut out a lot of water access from India.

China is planning a mega dam in Tibet able to produce triple the electricity generated by the Three Gorges — the world’s largest power station — stoking fears among environmentalists and in neighbouring India.

The structure will span the Brahmaputra River before the waterway leaves the Himalayas and flows into India, straddling the world’s longest and deepest canyon at an altitude of more than 1,500 metres (4,900 feet). The project in Tibet’s Medog County is expected to dwarf the record-breaking Three Gorges Dam on the Yangtze River in central China, and is billed as able to produce 300 billion kilowatts of electricity each year. It is mentioned in China’s strategic 14th Five-Year Plan, unveiled in March at an annual rubber-stamp congress of the country’s top lawmakers.

But the plan was short on details, a timeframe or budget. The river, known as the Yarlung Tsangpo in Tibetan, is also home to two other projects far upstream, while six others are in the pipeline or under construction. The “super-dam” however is in a league of its own. Last October, the Tibet local government signed a “strategic cooperation agreement” with PowerChina, a public construction company specialising in hydroelectric projects.

A month later the head of PowerChina, Yan Zhiyong, partially unveiled the project to the Communist Youth League, the youth wing of China’s ruling party. Enthusiastic about “the world’s richest region in terms of hydroelectric resources”, Yan explained that the dam would draw its power from the huge drop of the river at this particular section. – ‘Really bad idea’ – Beijing may justify the massive project as an environmentally-friendly alternative to fossil fuels, but it risks provoking strong opposition from environmentalists in the same way as the Three Gorges Dam, built between 1994 and 2012. The Three Gorges created a reservoir and displaced 1.4 million inhabitants upstream.

“Building a dam the size of the super-dam is likely a really bad idea for many reasons,” said Brian Eyler, energy, water and sustainability program director at the Stimson Center, a US think tank. Besides being known for seismic activity, the area also contains a unique biodiversity.

The dam would block the migration of fish as well as sediment flow that enriches the soil during seasonal floods downstream, said Eyler. There are both ecological and political risks, noted Tempa Gyaltsen Zamlha, an environmental policy specialist at the Tibet Policy Institute, a think tank linked to the Tibetan government-in-exile based in Dharamshala, India.

“We have a very rich Tibetan cultural heritage in those areas, and any dam construction would cause ecological destruction, submergence of parts of that region,” he told AFP. “Many local residents would be forced to leave their ancestral homes,” he said, adding that the project will encourage migration of Han Chinese workers that “gradually becomes a permanent settlement”. – ‘Water wars’ – New Delhi is also worried by the project.

The Chinese Communist Party is effectively in a position to control the origins of much of South Asia’s water supply, analysts say. “Water wars are a key component of such warfare because they allow China to leverage its upstream Tibet-centred power over the most essential natural resource,” wrote political scientist Brahma Chellaney last month in the Times of India. The risks of seismic activity would also make it a “ticking water bomb” for residents downstream, he warned. In reaction to the dam idea, the Indian government has floated the prospect of building another dam on the Brahmaputra to shore up its own water reserves. (source)

It will be interesting to see what China does, for many times her ‘dam’ projects are horribly inefficient. One can only look at the Three Gorges Dam, touted as a major project, that turned into an absolute disaster as it produced only a mediocre amount of electricity while destroying valuable farmland that China absolutely needs. China also has a history of pollution, so considering her behavior, it is possible she may pollute water that may make it unusable for both China and India alike. But the arguably biggest problem, and one that few see coming, is the demographic issue. China and India are both about a billion strong. The difference is that China has a severe sex-ration imbalance, with significantly more men than women, and more importantly, China has a lot older population, while by comparison India has a more balanced sex ratio and a lot younger population. China’s fertility rates are below replacement, and India’s are about at replacement rate. This issue- the demographics -matters the most because it shows that short term and long term, China is in a state of decline. The nation may be powerful, but a lot of this is image. It does not match reality, and even if she is powerful in the moment, she will have difficulty maintaining it. India, by comparison, is in a much better position to take a larger role in Asia because she has the people necessary to sustain said systems moreso than China does. This is only helped by the fact that, generally speaking, Indians are comparatively more welcomed by her neighbors than China, the former that many tolerate, and the latter that is actively disliked. Given the demographics, a long-term potential threat to China is population “overflow”. China and India both have a history of ultranationalism, but in China’s case, she tends to turn inward, while India tends to send her people overseas as well as take a more open approach. There are both Chinese and Indian communities around the world, but India has been very prolific in establishing her presence, perhaps moreso than China. Even in Asia domestic, because of the demographic age differences, it is not unreasonable that in the case of a war, India would have a much easier time sending people from her nation to ‘settle’ areas captured from China. It is an extension of the same problem that Russia faces with the Russo-Chinese border, but in an Indian context. Likewise, because Central Asia is also underpopulated and shared borders with India by way of Afghanistan, it would not be difficult for India eventually to send people into Central Asia, and make claims on what historically is a Russian area. Imagine if China ‘turned the water tap off’ in the Himalayas to India. It could easily trigger a possible not just political destabilization, but possible migrant crisis into China from India. The same is less likely to be said about China, as most population is concentrated on the far eastern regions. For India, it would be a comparatively short hike, and would result in a tremendous amount of chaos. There are multiple possibilities of what could happen, but considering China’s history of aggressive, nationalistic, and often short-sighted behavior that historically results in her undoing, her pursuit of this project might have consequences of unintended blowback that she did not expect.