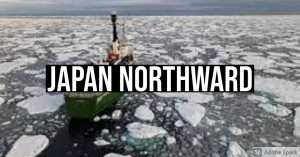 Control over the Arctic is becoming a trend that will dominate the next decade leading to the culmination of another global war as well as the future. Russia as noted has been working on attempting to secure near exclusive access by water from Murmansk to Chukotka. However, Russia still has two major problems at least, aside from cutting the ice. The first is getting around Svalbard and Greenland, which seems to be the reason for the current disputes over the Lomonosov Ridge and mineral rights in Greenland. Then there is a second and less discussed issue, which is Japan and Alaska, for Russia not only must navigate the narrow Bering Strait- which it closely shares with Alaska in order to secure her domination -but she must also contend with Japanese claims and shipping vessels, as the Asiatic power also has a very long history of sailing in the northern Pacific and even to Arctic waters. Now as Russia is attempting to stake her claims in the Arctic, Japan is now building her own icebreaker to explore the polar north.

The Japan Agency for Marine-Earth Science and Technology (JAMSTEC) will begin building a new massive icebreaker in fiscal 2021 to conduct research in the north polar region.

It comes as Arctic research increases in importance for scientific reasons amid the changing climate and for geopolitical reasons as well, as the melting sea ice reveals new resources and affects global trade routes.

The research vessel, which comes with a total price tag of 33.5 billion yen ($306 million), is expected to be as large as Shirase, the icebreaker Japan has used for research in Antarctica.

JAMSTEC hopes the new vessel will make it possible for researchers to reach the North Pole and conduct winter-season observations in the Arctic Sea that have not been previously done.

Observers say the effects of global warming on the Arctic Sea have been extreme and are only increasing.

“Change in the Arctic Sea is not a problem of a far-flung region,” said Hiroyuki Enomoto, vice director of the National Institute of Polar Research. “Rather, it impacts the entire globe, including Japan.”

The effects of climate change in turn make the region increasingly important geopolitically, which has prompted many other countries to dispatch their own Arctic research icebreakers.

According to JAMSTEC’s plan, the new vessel will be 128 meters in length and 23 meters in width, and will weigh in at 13,000 tons. It will be capable of navigating through 1.2-meter thick ice, compared to Shirase, which can break 1.5-meter thick ice.

The new vessel will be equipped with a helicopter, a drone and an autonomous underwater vehicle. It will have capacity for 99 people and can conduct observational operations all season long.

JAMSTEC, which will operate the icebreaker, expects it to come into service in 2026. (source)

It is most likely that Japan will succeed well at this, and far better than the Russians or Americans, for just like Germany, while Japan does not have a history of innovation, they take inventions or ideas, especially those from the Americans, and bring them to an efficient conclusion, for good or evil. Examples include everything from cars, to electronics, to animation (Anime and its popularity), to eugenics and human experimentation. Remember too that for almost two decades following the Russo-Japanese war of 1905, Japan controlled the land of Siberia east, and only gave them back by choice later. Russia then was also a lot stronger than she is today, and almost double the size in population, while Japan was smaller then than what she is today. It will be an important trend to watch Japan attempt- with most likely American help -the Arctic and stake claims with the US, for the world indeed becoming ‘multipolar’, and the question is which poles will emerge, as in will they be “US-friendly” or “Russia-friendly”, and the US is working to see that the influence is inclined to her favor.