You are here: Home › Biden Reverses Trump Germany Withdrawals, Builds The Right Back Up As US And Germany Sign New Agreements 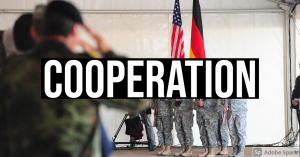 During the Trump years, one of Trump’s promises was to ‘make [other nations] pay their fair share’, and this meant, among many things, pulling out of Germany. However, President Biden has reversed this, and will be adding more troops to Germany .

The United States will ramp up its forces in Germany amid the latest tensions with Russia over Ukraine, abandoning former President Donald Trump’s plans to withdraw around 12,000 of the 36,000 troops from the fellow NATO country.

“I briefed the minister on our intention to permanently stage an approximately 500 additional U.S. personnel in the Wiesbaden area as early as this fall,” U.S. Secretary of Defence Lloyd Austin told at press conference after meeting his German counterpart, Annegret Kramp-Karrenbauer, in Berlin.

Last June, Trump had announced his intention to cut the U.S. troop contingent in Germany by about a third, saying Berlin had been taking advantage of the United States while not meeting financial obligations to NATO.

In additional news, the US and Germany are pledging closer ties to work with each other.

The US and German defense chiefs sat down together in Berlin on Tuesday, at a time when pressure is mounting on multiple fronts. Russian troops appear to be massing along Ukraine’s border. Israel is suspected of sabotaging an Iranian uranium enrichment facility. An Afghanistan withdrawal deadline looms.

Easy solutions to these and other global security problems are in short supply, and the alliance remains divided over several of them. Yet both sides say they are committed to working together.

“We will deploy 500 additional troops to Germany,” Austin announced at a press conference with German Defense Minister Annegret Kramp-Karrenbauer following their meeting.

This constitutes a marked turn-around from ex-US President Donald Trump’s decision to move troops out of Germany to Poland.

“German and American soldiers stand side-by-side in a number of operations,” Kramp-Karrenbauer stressed, describing the US-German partnership as “intense and growing.”

Defense Secretary Lloyd Austin’s visit, which is part of a four-stop tour of key allies, is one of several recent virtual or in-person meetings between Biden administration officials and European counterparts.They are part of an all-out diplomatic effort to reestablish the United States as a leader in managing global stability, and to reassure nervous allies shaken by the former Trump administration’s often dismissive, sometimes bullying tone.

Austin’s meeting with Defense Minister Annegret Kramp-Karrenbauer, and other German defense and security officials, aimed to “reinforce the value the United States places on the bilateral defense relationship with one of our closest NATO Allies,” according to a US Defense Department statement.

The US is also keen to push Germany on “combating the malign influence of our shared strategic rivals” — an allusion to Russia, and a pressure point between the two sides.

Like Trump, Joe Biden opposes Nord Stream 2, an undersea gas pipeline that could double Russian natural gas sales to Germany. Biden has called it a “bad deal” for Germany and looks set to continue a policy of sanctions from the Trump era.

I don’t want to indulge the “Russian conspiracy theory” aspect that the popular media has supported so aggressively, as there has been a lot of questionable discussion about this. However, as we have noted at Shoebat.com, there was enough evidence available to the public that legitimately suggests Trump was definitely in communication with the Russians, and under less than completely transparent terms. Therefore, it would not be prudent to completely write off the possibility that Trump may have indeed been involved with them, and to that , the fact that Trump has a long history of being prone to extreme vanity, is a profligate spender, a sexual degenerate, and tied directly to numerous criminal figures, including Jeffrey Epstein. As NY Magazine has pointed out very well in a thoroughly investigated piece, Trump is more tied to such Russian interests than many want to admit.

But something that is also known is that for all of the Russian planning- and certainly the Americans plot too -the Americans have a long history, it seems, of thwarting Russian plans and turning their own game on their head. The Adventures of Rocky and Bullwinkle may have been a cartoon, and Boris and Natasha fictional spies for Fearless Dictator of Pottsylvania, but the cartoon is a more accurate reflection of American-Russian fighting than peopel might care to admit, it seems, as Rocky and Bullwinkle (USA) always seem to outwit even the most well-crafted of Boris and Natasha’s plans to “capture Moose and Squirrel”.

What if the USA allowed Trump to become President to forward her own strategy of tension missions against the US public, something of which there is also a lot of direct evidence for? And to that, what if Biden’s victory was not only meant to be open, but the efficiency that Biden has been given to run is also a part of this same circle, in that despite Biden’s open ties to China, he is also working against them and for the fundamental US cause?

I am not praising Biden, and certainly not Trump, but pointing out that no matter what one says, real power is not the man who sits at the desk for the photos, but is in the hands of an unseen oligarchy behind closed doors. Perhaps Trump may have actually won in 2020- the evidence suggests there are states he certainly would have taken, -but that his presence was determined to be useful ‘enough’ and was intentionally removed, enough to curb public appetites and eliminate possible unknown problems (there is far more that happens that we do not know than what we do know), and simply advance US interests while slipping those of the Russians out from under their fingers?

We know that on a “macro” level, policy does not change. What was the ‘great game’ of the 19th century is still alive, under some different circumstances. Overall, it is reasonable to say that Trump or not, the US stance against Russia continues to improve, and I say this as a general observation, for if one looks at the hard data that one would use to determine who is in a better condition not just socially, but economically and better positioned for the long-term, it is the US completely. The US is richer, better organized, has stronger infrastructure, is less prone to internal rebellion, has the ability to efficiently put down or prevent rebellions, better weapons, a better ability to defend herself, and a better situation with her allies, not to mention how the population is larger, more stable, and better able to be directed. Even China, for all our criticisms of Russia, is potentially at or above Russia’s capacities right now, and that says more about Russian than China.

However, there are still real US weaknesses, and the biggest one that she has is Germany in Europe. The US is going to do whatever she has to in order to keep Germany on her side, because Germany is a major powerhouse, and if Germany sides with Russia, the US is pushed out of the European sphere save for the UK. However, with Germany, she also solidifies her relationship with Turkey and now can beat Russia in a major European war. If one adds the Japanese to this in the East, then Russia may be forced to split up into a series of independent republics east of the Urals.

Biden does a lot of things that are not good. However, if one takes the position of US foreign policy, what he is doing right now is not only in line with US long-term interests, but is more so than what Trump did many times, for the President in the US is just a figurehead, and real power is what is behind the scenes.