You are here: Home › Russian Orthodox Church Attempts To Set Up Protocols For Exorcisms After Several Deaths 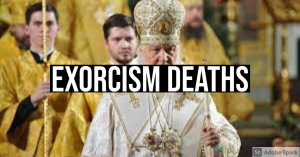 It is not uncommon in the US and other parts of the world where Protestantism in various forms is the dominant religion to hear about exorcisms gone awry, where people engage in strange practices that can lead to physical harm or death. One does not often hear about such things in the Catholic Church, and when one does, they are swiftly denounced because the Magesterium provides a clearly referenced standard against which not just faith and morals, but the duties of the laity versus the clearly are defined, and serves a way to identify what one can or cannot, or should or should not participate in.

The Orthodox Churches are in an interesting situation because they do have apostolicity, and hence is not just a mere special relationship historically, but theologically is the reason why one can receive communion in an Orthodox Church and vice versa. However, there still exists the issue of schism on many theological issues, and for the more practical purpose of the common man, manifests in the question of what to do in questions of faith and morals.

For example, many Orthodox will say when answering a question, something like “Saint (long Greek or Slavic sounding name here) of (some ancient name for some place in Turkey, Syria, or Egypt or a place in Russia here) said (optional insert a one-sentence story here about the context here) that (insert wisdom here).” However, this is no different than what the American Protestants do, except all the places are in Western Europe or the US and the names are Anglo-Saxon, Germanic, and sometimes Nordic or French, and they date all from the 16th century or later. Many times, even these Protestant pastors will make objectively intelligent or insightful saying on theology or morals that are even dogmatically correct per Catholic standards. However, doing this- Orthodox, Protestant, or Catholic -is more than quoting somebody else because lacking a Magesterium through which these things can be interpreted in a context greater than just themselves, they are just quotes.

In the Catholic Church, no matter what one thinks, there is a clearly defined body morality and definition of faith that, absolutely rooted to and inseparable from Sacred Scripture and Tradition, has a context in the wholeness of Christian history. This is why many have noted that being Catholic is being rooted to history, and why it is easy to point out problems when they happen in the Catholic Church, because there is a clear standard against which to measure right from wrong. Such a clear Magesterium does not exist in the Orthodox Church, which while well-meaning, does not have the clear definitions to distinguish particulars of faith and morals when problems arise. Thus, like Protestantism, what happens is that people take the well-meaning examples of others as truth and become the very Pope that many criticize in their attempts to reconcile these issues. Some are not big, but when issue such as marriage and divorce, or even homosexuality now come up, it can cause problems.

Such an example one can see from Russia, where a series of exorcisms has lead to several deaths.

The Russian Orthodox Church is seeking to deter its followers from carrying out their own exorcisms following a series of deaths and injuries that have cast a spotlight on the religious ritual.

Metropolitan Hilarion, who heads the Moscow Patriarchate’s department of external relations, said that the church is drawing up a document that would set out rules for the procedure.

The church had warned against people carrying out exorcisms, which led to the deaths of at least two people in Russia in 2019, including a nine-year-old boy who had been gagged and whipped by his father in Yekaterinburg.

In 2011, a 26-year-woman died in Voronezh after she was tortured and made to drink five gallons of holy water by her parents, who believed her husband was the devil.

In November 2020, a video was widely shared showing a screaming 10-year-old boy in Volgograd being held down by his parents who tried to exorcise him, Russian agencies reported, although the boy survived.

Metropolitan Hilarion told RIA Novosti that the church’s document would draw on the history of the practice “dating back to apostolic times,” and would put in place “proposals for its unification and regulation.”

In an interview in December 2020 with the Russia-24 news channel, he said that an exorcism should not be carried out by an ordinary priest but by a clergy member who had been given special authority from a bishop.

He added that the process also cannot be performed on children and that possession should not be confused with mental illness.

He also said that followers should not carry out on their own any exorcisms, which he defined as when a “possessed person” is brought before a priest who reads out special prayers “to cast out the demons,” URA News reported.

“If questions arise as to whether demons should be driven out of this or that person, first of all, you need to turn to the priests. Any [personal] initiative in this is completely unacceptable,” he said.

Patriarch Kirill, who heads the Russian Orthodox Church, said in 2017 that exorcism had to be carried out by “spiritually strong” priests. In August 2020, Russian news agencies reported the death from the coronavirus of the Archimandrite German Chesnokov, a renowned exorcist for the church. (source)

Now it is good that exorcisms happen. However, in the Catholic Church, it is a priest who does them and can only do them. It is true that a lay Catholic can perform the rite, but likewise, a child can also play with fire, for the ability to do something does not mean that one is permitted because one does not have the control- or in the case of the clergy the grace -to perform such a thing with the efficacity it needs to be completed safely.

Surely the people in this story were well-meaning, but they lacked the fundamental grace, and lacking a clear Magesterium to define what is and what is not permissible, it has the potential ability to turn into a matter of self-interpretation, which no matter how good the intentions are, is frequently inclined to lead to disaster more often than not.

It was not an accident that Christ not only in Sacred Scripture appointed a Church, but established in on one Apostle- St. Peter -for true authority must have clear accountability and definition, and no matter how muddled any individual who sits in his chair can make an issue, no matter how many heretical things he might say, not only is the accountability still there, but the teaching cannot change, for it is not from man, but God, and as Christ Himself promised, such is the Church over which the gates of hell will not prevail.

Report: Religious Freedom Being Eclipsed By “Rights” Over Gender, Etc.
The Jews Were More Ruthless Than The Romans
Follow