You are here: Home › China Angry With Turkey Over Refusal To Extradite Uyghur National 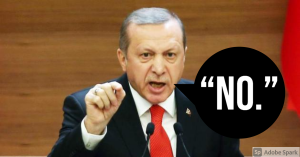 This January 2021, I noted a piece from Business Insider that claimed Erdogan was trading fellow Turkic Uyghurs back to China- most likely to be tortured and murdered -in exchange for COVID vaccines. These claims are still debated, in that they have yet to be more completely proven or disproven. However ,they highlight the interesting relationship between the third and eighth most powerful militaries in the world, and in the case of the latter, a historical world imperial power that amid the current and rising situation of pan-Turkism, might prove to be an even more formidable force than ever before in her history.

According to a recent story from the SCMP, in something that can be proven, China is having a spat with Turkey over Turkey’s refusal to extradite a Uyghur who has refugee status in Turkey back to China.

China has expressed its strong objection to Turkey’s refusal to extradite Abudukadir Yapuquan, a prominent Uygur activist who Beijing says is suspected of terrorism in Xinjiang.
At a press briefing on Tuesday, foreign ministry spokesman Zhao Lijian said China called on Turkey to face Abudukadir’s “essence as a terrorist” and reverse its “erroneous decision” to avoid having a serious negative influence on China-Turkey relations.

“ETIM [East Turkestan Islamic Movement] is a terrorist organisation listed by the UN Security Council and is recognised as such by Turkey,” said Zhao, adding that Abudukadir was one of the initiators of ETIM and was accused of plotting terrorist activities on Chinese territory many times. Zhao said the evidence was conclusive.

China was strongly dissatisfied with, and firmly opposed, a Turkish court decision not to extradite Abudukadir, Zhao said.

According to Radio Free Asia, a court in Turkey rejected a request by Beijing to extradite Abudukadir to China to face “terrorism” charges, citing a lack of credible evidence, his lawyer said, adding that Abudukadir had been banned from travelling abroad in a previous trial, and that he was free now the decision had been reversed.

Abudukadir was accused by Chinese authorities of helping establish ETIM and being engaged in planning and carrying out terrorist acts.

He has been imprisoned in China twice. He escaped from China in 1998 and ended up in Turkey, home to an estimated 50,000 Uygurs. He was arrested by Turkish police in 2016 on charges of being a “terrorist” and had since been under detention or house arrest, according to media reports.

Cheng Yijun, a researcher with the Institute of Russia at the Chinese Academy of Social Sciences, said Turkey’s decision to not only turn down the extradition request but to set Abudukadir free would have a negative effect at the diplomatic level.

Cheng said Turkey had remained “flexible” on the Xinjiang issue, and tried to maintain consistency with the United States and other Western countries.

Turkish Foreign Minister Mevlut Cavusoglu said he had conveyed Ankara’s “sensitivity and thoughts on Uygur Turks” to his Chinese counterpart Wang Yi when he visited Turkey in late March, amid protests organised by Uygur activists outside China’s embassy.
This month, Turkey summoned China’s ambassador after his office took to social media to denounce two top Turkish politicians over their criticism of Beijing’s crackdown on Uygurs in Xinjiang. (source)

How Turkey handles this situations will be an interesting political test for Erdogan, as well as the Turkish image and its relationship with China.

Now with all respect to the man, no matter who he is, I don’t want him being sent back to China, because that would most likely mean his death, and in a horrible way, and one should not desire such things for people in general. His fate truly lay in the hands of Erdogan. Will he submit to China, or not?

The answer is unclear right now. If he does, politically it could be disastrous not just for him, but for the image of Turkey as a leader and unifying force of both the Islamic world as well as the pan-Turkic world. If he does not, then it only bolsters his position in both.

Turkey is looking to revive herself on a global stage. There is nothing she can practically do right now in Xinjiang, except telling China to get lost, which is what supporting this man would be doing. It is not much in the way of real help, but image and long-term power sustainability it works out well, and considering how the US supports the Uyghurs and Turkey, it would reinforce the ‘NATO circle’ that has existed since the Cold War, and it also puts Russia in the interesting position of possibly asking where her own ‘human rights’ condemnation of China’s actions are, which she will remain silent on because of her desire to maintain a good relationship with China, not because she likes China, but she needs what ‘allies’- even in name -that she can get, as well as keeping China out of Siberia more than what she has already penetrated, albeit illegally, into.

In other words, the more that China complains, the more it becomes a ‘win’ for Turkey, and really to the isolation of China, whose outright abuse of the Uyghurs and poor attempts to hide it feed the world anger at her that in time will be used as justification for military actions against her.