You are here: Home › Prices Skyrocket, Plan Continual Ascent For The Rest Of The Year 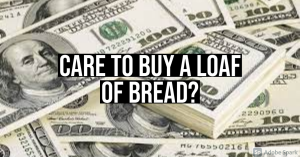 One of the most destructive aspects of modern monetary policy is that, as it has been said and known for all of history, printing money does not lead to wealth ‘creation’, but only to the loss of value in the means of value through a loss of faith in the efficacity of the object to service debts. Unless the item in question is able to be directly exchange for a sum of a real, fixed value whose existence can be tangibly shown to exist in quantities to service said printing, it is but a mere social contract, and if said social contract is continually violated by ‘making money from nothing’ without an ability to show something of value in exchange, the currency system will eventually collapse until a new one is put in its place.

The federal reserve bank’s money printing project with “COVID checks” is having just this effect. It is causing rapidly rising prices- and prices which will continue to rise -for the foreseeable future because the value of the dollar itself is depreciating to the point of becoming worthless. It will not happen immediately, and most likely there will be a historical ‘buy back’ at a discounted rate into the system, but it will hurt people in the interim period, mostly by making the cost of goods and services rise so much that people’s wallets become seriously strained to the point of insecurity about being able to feed themselves.

Now thankfully, it is extremely unlikely for the US to endure a serious starvation, simply because she is the world’s breadbasket. Many nations like Egypt, Saudi Arabia, many parts of Africa, and parts of Asia could see real starvation while the US sees an- albeit painful -increase in the price of food. Yet this is what CNBC reports is starting to happen, for new data show that the Consumer Price Index (CPI) is increasing rapidly.

Consumer prices shot higher in March, given a boost by a strong economic recovery and year-over-year comparisons to a time when the Covid-19 pandemic was about to throttle the U.S. economy, the Labor Department reported Tuesday.

The consumer price index rose 0.6% from the previous month but 2.6% from the same period a year ago. The year-over-year gain is the highest since August 2018 and was well above the 1.7% recorded in February.

The index was projected to rise 0.5% on a monthly basis and 2.5% from March 2020, according to Dow Jones estimates.

The report “is the clearest indication so far that the signs of mounting inflation evident in business surveys and producer prices are feeding through to stronger consumer prices,” wrote Michael Pearce, senior U.S. economist at Capital Economics. “For all the focus on supply disruptions pushing goods prices higher, the strongest upward pressure on prices is coming from the services sector.”

Gasoline prices were the biggest contributor to the monthly gain, surging 9.1% in March and responsible for about half the overall CPI increase. Gasoline is up 22.5% from a year ago, part of a 13.2% increase in energy prices.

Food nudged higher as well, up 0.1% for the month and 3.5% for the year. The food-at-home category increased 3.3%. All six of the government’s measures of grocery store indexes rose, with the biggest gain of 5.4% in the category of meats, poultry, fish and eggs.

Food away from home increased 3.7%, while “limited services meals,” which include pickup, take out and delivery restaurants, jumped 6.5% for the year, the largest annual increase in the survey’s history dating to 1997.

Markets showed a modest reaction to the news, with stock futures off their lows for the morning but still indicating a negative open. Government bond yields held mostly flat.

That big surge on a year-over-year basis resulted from what economists call the “base effect,” or the lower level used for comparison. In March 2020, the government had just begun a massive shutdown of U.S. businesses that ultimately would see more than 22 million Americans on the unemployment line.

While the inflation numbers look high, many economists as well as policymakers at the Federal Reserve expect the increase to be temporary. April likely also will show a sharp rise, but then the numbers are supposed to decrease as the worst months of the shutdown fall out of the data comparisons.

Fed officials have said they won’t adjust policy based on short-term jumps in inflation readings. Chairman Jerome Powell told CBS’ “60 Minutes” in an interview that aired Sunday evening that he does not expect any interest rate hikes this year. (source)

The trend of rising prices for goods and services is going to continue, and as long as there are checks coming from the Federal Reserve, it will only speed the process, because the issue is not one of an actual rise in the objective value of the services in question, but because the means of exchange is progressively worth less than what it was before.

Eventually, the US dollar is going to be in for a severe day of reckoning, and it will affect the global financial system in ways that will cause a political upheaval. But until that time comes, things will get more expensive, the people poorer, and angrier, and likely lead to social instability and violence.

The New Saint Of The Left-Wing Media, Duante Wright, Choked A Woman And Pointed A Piston On Her Head Demanding That She Give Him $820
Nike Begins Selling ‘Refurbished’ Sneakers
Follow