You are here: Home › Forget About The Housing “Shortage”- Prepare For A Housing Crash 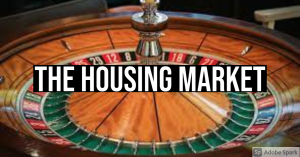 The Wall Street Journal reports that amid the burning desire among seemingly many Americans to buy a home that the nation is in a shortage of four million homes, and suggests that building needs to continue.

The U.S. housing market is 3.8 million single-family homes short of what is needed to meet the country’s demand, according to a new analysis by mortgage-finance company Freddie Mac.

The estimate represents a 52% rise in the nation’s home shortage compared with 2018, the first time Freddie Mac quantified the shortfall.

The figures underscore the severity of the housing deficit, which is a major factor fueling the current red-hot housing market. The shortage is especially acute for entry-level homes, which makes it more expensive for first-time home buyers to enter the market, said Sam Khater, chief economist at Freddie Mac.

“We should have almost four million more housing units if we had kept up with demand the last few years,” Mr. Khater said. “This is what you get when you underbuild for 10 years.”

Freddie Mac reached its shortage figure by assessing the amount of single-family home building needed to match demand from household formation, second-home purchases and replacements of damaged or aging U.S. homes, and comparing that with the pace of construction.

The supply shortage poses an obstacle to U.S. economic growth, by pushing up housing prices and making it difficult for first-time buyers to enter the market and build wealth, Freddie Mac said.

Home-building activity has been subdued since the 2007-09 recession, when many builders went out of business. While builders have increased activity in the past year, they are hampered by shortages of labor, materials and developed land. Many builders are pacing their home sales to make sure they don’t sell more homes than they can build. (source)

However, is this the reality?

If you have been to Home Depot, Lowes, or other construction materials places, you would know that construction materials have exploded in prices. These prices increases are not funny, but represent a toxic combination of dollar devaluation combined with natural inflation due to either the perceived or real demand for homes.

This is not just a ‘price increase’. These prices are materially unsustainable. There is no way that building can continue at this rate, unless the future means obscenely high housing prices that either must fall and thus destroy the person who purchased the materials to build the house, or that will stay high and lock out the majority of buyers, who are ostensibly the broke Millennial and Zoomer generations.

This leads to another point, which is, who’s buying?

Most people who are buying these houses, it seems are rich, or who make enough money to get enough debt to buy a house. However, the economy is unstable, and most people under 40 work in not just miserable jobs that don’t pay enough to live on, but that have no future, are extremely unstable, and fiscally impossible to buy a house with. This isn’t 1951, 1961 1971, or even 1981 and 1991. This is 2021, and the economy is gutted.

People can’t just buy homes like they used to, without major risk, and for many not at all.

The very promotion that “so many” are buying houses, seems very strange. In fact, it seems a lot like the housing crisis of 2007/2008 the lead to the great economic collapse after years of pushing extortionate housing prices and putting people into debt.

In fact, one might say it was the reverse of the COVID phenomenon, which drove people from cities, only to have prices plummet for urban realty that major companies are buying up for cheap right now. Likewise, what is happening right now is a major and rapid increase in prices, that may be followed by a crash later- people losing their shirts just like in 2008 through 2010, with major players picking up cheap real estate for low prices.

The current real estate market is NOT a buyer’s market. To the contrary, it is a seller’s market, and those who are smart might want to sell what they can now- while possible -take their earnings and run as fast as possible for the proverbial door, because this will not last. It cannot last, because the prices and nature of such rising prices due to overconsumption- the true definition of inflation -with currency devaluation is always a toxic combination, and somebody get’s left “holding the bag” by buying at the wrong time.

Don’t get stuck with somebody else’s bag.