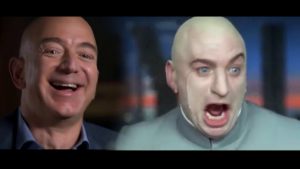 It is one thing to abuse one’s employees. It is another thing to abuse them and then, seemingly intentionally, express a lack of care as to why they were abused and try to make it seem as care. Such seems to have recently taken place as the infamous Amazon CEO has written a letter discussion the ‘treatment’ of Amazon employees.

In his final letter to shareholders, Amazon CEO Jeff Bezos on Thursday laid out a broad vision for the future of the company, committing to extend Amazon’s famous obsession over its customers to the same level of care for its employees.

Bezos pointed to the recent union election outcome at one of Amazon’s Alabama warehouses as an example of why the company needs to address challenges within its workforce. Last week, Amazon secured enough votes to defeat a historic unionization drive at its Bessemer, Alabama, warehouse, which if successful, would have represented the first union at a U.S. Amazon facility.

“While the voting results were lopsided and our direct relationship with employees is strong, it’s clear to me that we need a better vision for how we create value for employees – a vision for their success,” said Bezos, who will step down as CEO in the third quarter, turning the helm over to Andy Jassy, CEO of Amazon Web Services. Bezos will transition to executive chairman of Amazon’s board.

Amazon has famously held a core set of leadership principles, chief among them being “customer obsessed.” In the future, Bezos said he wants Amazon to do the same for its employees.

“Despite what we’ve accomplished, it’s clear to me that we need a better vision for our employees’ success,” Bezos said. “We have always wanted to be Earth’s Most Customer-Centric Company. We won’t change that. It’s what got us here. But I am committing us to an addition. We are going to be Earth’s Best Employer and Earth’s Safest Place to Work.”

Bezos also rejected claims that Amazon has cultivated a brutal workplace culture in its warehouses. “Our employees are sometimes accused of being desperate souls and treated as robots. That’s not accurate,” he said. (source)

This story is a perfect example of the long-established trend in American “business” and politics of issuing “apologies” and “condemnations” of things when it is already well past the appropriate time to do so and becomes insulting.

Bezos created Amazon in 1994 and until February 2021, was the undisputed head of it. He will formally step down in fall 2021, but the fact is that doesn’t change history. Bezos made his billions by absolute, mercilessly, ruthlessly, and cruelly abusing his workers, fighting as hard as he could against any improvements to their lives and working conditions, and treating them worse than animals in his warehouses while having people laud him and look up to him as a veritable cult leader or worse. He has done more to find “legal loopholes” to revive 19th century abusive working conditions in the US but with a legal cover arguably more than any other CEO in modern times, and were it not for the consistent, continual work of people who at least seem to give even a farthing about human dignity fighting for the people who have been not just worked to death, had their lives ruined, or just abused to the point of destroying their dignity, let alone how many trucking companies have been defrauded by Amazon’s abusive logistics policies, then Amazon would continue to be given a ‘free pass’ for Jeff’s permitting, encouraging, and driving cruelty and modern-day slavery as his business model.

If Amazon was legally permitted to, it would not be an exaggeration to say the company would chain workers to their position and work them to death, because if they treat men the way they do already, and only apologise in the slightest way when forced to admit with copious amounts of proof their abusive practices, and even then fight it as hard as possible before admitting it, this is not the behavior of a “leader”, but of a ruthless tyrant, which is the real face of “leadership” in most of the so called “respectable” businesses in the country.

Why is Bezos stepping down? He has been in power for a long time, but perhaps these scandals, which have been building for years, may be a reason, as they can no longer be effectively covered. However, that does not mean that Bezos, with his hundreds of billions of dollars, can be allowed to be forgotten what he has done, because his real legacy is not creating Amazon, but rather, the arguable hundreds of thousands, and perhaps millions of people whose lives have been severely negatively impacted by his actions.

This is not an apology. This letter is an insult to the employees. Likewise one may want to remember the sins that that “cry out to Heaven for vengeance” are not limited to abortion and sodomy, but the oppression of the poor, widow, and orphan, as well as very umportantly, the deprivation of the working man of his justly earned wages.

Texas Almost Has A Second Round Of Blackouts
Could Egypt See Another Revolution In A Few Years, Or Perhaps, Will Tigray Have Intervention Sooner Than Expected?
Follow