You are here: Home › Texas Almost Has A Second Round Of Blackouts 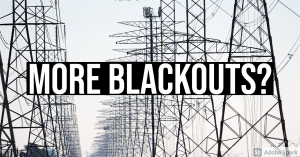 Earlier this year, Texas faced a “third world” crisis as the power grid, which operates as a separate entity from the eastern and western connections that interlink all the other states in the US, went dark due to surprise demand and aging infrastructure, two not uncommon problems to any system but a shock to American sensibilities and Texas’ ability to operate her economy. After much work, power was restored, but at a severe cost to many people financially.

Now according to a recent story, Texas almost ‘went dark’ again due to the same issues- aging infrastructure and high demand.

Texas came uncomfortably close to another round of rolling blackouts Tuesday night because grid operators misjudged the weather.

The Electric Reliability Council of Texas, which manages most of the state’s grid, had counted on a mild cold front sweeping the state, lowering demand for power. It didn’t happen. As a result, demand on the grid was about 3,000 megawatts higher than anticipated — or the equivalent of 600,000 homes.

The forecasting error, coming as 25% of power generation was off line for seasonal repairs, was another grim reminder of the vulnerability of Texas’s grid. Two months ago, a deep winter freeze knocked out almost half the state’s generating capacity, leaving millions of people in the dark for days. But Tuesday’s weather was hardly extreme, and the close call has raised questions about whether the grid operator, known as Ercot, can prevent a repeat of the February energy crisis.

“It’s a disgrace for a power grid in modern times to struggle to keep the lights on during a mild day,” said Daniel Cohan, an associate professor of environmental engineering at Rice University. “We’ll be in trouble when a summer heat wave comes in and demand is one-and-a-half times as much as it was yesterday.”

Weather typically usually doesn’t have a big impact on electricity demand in spring and fall. Those are the so-called shoulder seasons when customers are neither cranking their heaters nor blasting their air conditioners. On Tuesday, temperatures in Dallas, Brownsville and Houston were moderately higher than normal, reaching or exceeding 80 degrees Fahrenheit (27 Celsius). That, combined with a dearth of generation, prompted Ercot to ask for conservation efforts for almost four hours.

“Yesterday was an odd day,” said Matt Rogers, president of the Commodity Weather Group LLC in Bethesda, Maryland. “There were thunderstorms in West Texas that kept wind generation lower than normal. They are going to have another West Texas wind dip today, but not as much as yesterday.”

Ercot on Wednesday warned that it was again anticipating tight grid conditions, but didn’t call for conservation. The grid operator forecasted low wind and solar output for the day, while a forced power-plant outage in the Rio Grande Valley added to the large number of plants already down for maintenance.

Texas has long taken a laissez-faire approach to its power grid, allowing market forces — rather than regulations — to ensure there’s enough power on hand to satisfy demand. State lawmakers have been reluctant to rethink that method as they consider addressing the problems that led to the crisis in February.

The market is designed to operate with thin reserve margins. Unless lawmakers intervene to change that, weather will continue to beget volatility and chaos, said Katie Bays, an analyst at FiscalNote Markets.

“Texas is a goat rodeo,” Bays said in an interview. “The state doesn’t want to intervene in the market, but the way that Ercot is operating is a feature — not a bug.” (source)

For years, Texas often touted her powerful economy, business sector, and stability as opposed to that of California. Now, it seems dangerously close that if she continues in this way, Texas may become another California in a decade or so.

The reasons are simple. As noted above, in typical American fashion, Texas is suffering from classic mismanagement of infrastructure and excessive demand. This is exacerbated by the fact that she has continued to receive large numbers of problematic and destructive migrants- the California kind, not the Mexican kind -who want more “services” and “higher property values” but consistently support higher taxes and the same legal changes that destroyed California and will destroy any place, and are never happy unless they have “more” until they recreate the same absolute dump they created and fled from, while destroying the culture in the process.

This trend is not going away, because people still keep coming into Texas from California and other problematic areas, demanding more and refusing to adjust their own needs or desires to help their neighbors. The concept of “lagom” such as found in Sweden they would take offense to, but yet such restraint and “good enough” for the maintenance of the greater good is the only way that societies survive and are not overrun by grifters and other sorts of people with rootless, parasitic mindsets who seek their good at the cost of the others.

If Texas does ‘go dark’ again, it will have massive political implications, because when Americans feel ‘personally affected’, there is a cultural desire for revenge that becomes politically exploitable and turns into its own form of a public circus that doesn’t end as long as money can be pulled from it, but while creating serious, long-term consequences that generally serve no one’s interests except for those of people in power who do not care about the good will of anyone except themselves. Texas may be politically pressured into electrically speaking, ‘rejoining’ one of the major interconnects and in doing so, losing her ‘independence’ that she currently enjoys, which would be championed by many people, including a majority of the “new Texans”, as they do not care about Texas, the culture, or her future so long as they can get cheap food to feed themselves in their oversized and overpriced homes for their selfish interests even if it comes at the cost of their freedom and those of their descendants, or the absolute destruction of the people who lived in Texas for decades, possibly even centuries, and who built the state into what it was and, like locusts on a crop, consumes their state before looking for another host to destroy while not just lacking introspection, but blaming the locals for the problems that their own actions created. .