You are here: Home › First The US, Now Mexico Is Having A Water Crisis 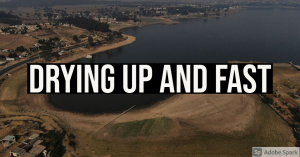 One of the factors considered to be highly influential in the migration of Americans from Texas and other Midwest and Southern states to the respective West Coast and Northern regions were the ‘dust bowl’ conditions of the 1930s that when combine with the economic crash of 1929, resulted in mass impoverishment as well as unprecedented rates of hunger.

The US economy has been in a state of semi-free fall since 2008 when the economy collapsed following decade of bloated spending that resulted in the corporate bailouts in the form of TARP. While covered up, the fundamentals of the crash never disappeared, and have continued to persist but through ballooning debt and financialization of a progressively declining dollar due to overprinting. This took another sharp dive in 2020 when Trump issued the first economic stimulus checks, which resulted in a small economic “boom”- as it also has under Biden -but at what will become obvious the long-term cost of the value of the dollar itself, as printing money does not elevate the value of money, but lowers it due to the nature of supply and demand.

If it was not bad enough that Biden has continued to massively print money, things are getting worse weather-wise, as dry conditions are causing increases in water scarcity out West. However, it is not just the US that is affected. As ABC News reports, Mexico is in a serious drought right now, with conditions affecting 85% of the nation.

Drought conditions now cover 85% of Mexico, and residents of the nation’s central region said Thursday that lakes and reservoirs are simply drying up, including the country’s second-largest body of fresh water.

The mayor of Mexico City said the drought was the worst in 30 years, and the problem can be seen at the reservoirs that store water from other states to supply the capital.

Some of them, like the Villa Victoria reservoir west of the capital, are at one-third of their normal capacity, with a month and a half to go before any significant rain is expected.

Isaías Salgado, 60, was trying to fill his water tank truck at Villa Victoria, a task that normally takes him just half an hour. On Thursday he estimated it was taking 3 1/2 hours to pump water into his 10,000-liter tanker.

“The reservoir is drying up,” said Salgado. “If they keep pumping water out, by May it will be completely dry, and the fish will die.”

Mexico City Mayor Claudia Sheinbaum said that as the drought worsened, more people have tended to water their lawns and gardens, which worsens the problem.

The capital’s 9 million inhabitants rely on reservoirs like Villa Victoria and two others — which together are at about 44% capacity — for a quarter of their water; most of the rest comes from wells within city limits. But the city’s own water table is dropping and leaky pipes waste much of what is brought into the city.

Rogelio Angeles Hernandez, 61, has been fishing the waters of Villa Victoria for the last 30 years. He isn’t so much worried about his own catch; in dry seasons of the past, residents were able to cart fish off in wheelbarrows as water levels receded. (source)

Droughts often lead to migrations. Since many Mexicans and other Central Americans migrate, temporarily or permanently, to the US for work, there is a possibility that massive droughts in the region could foreshadow another mass migration wave or waves in the future. Given the social conditions, with tensions between the left and right ever increasing, the trends of political violence would be exacerbated by any arrival of migrants, who would likely be exploited by both sides for political gain.

In addition, the trend of rising food prices is also going to continue, as Mexico is a major source of US food imports, especially for fruits and vegetables. This will have a direct impact on budgets, and while the consumer will feel the price increases and it may cause another series of restaurant closures and economic fallout from such, it likely will not cause starvation. The same cannot be said about other nations that are more dependent on food imports.

It is possible these trends could reverse. After all, a major storm or series of storms could help replenish lost water. However, it is not likely to because the long-term trend of water mismanagement, especially in the US and other highly developed nations, and in particular by industry, is a major problem that is not being addressed. It is most likely that the problem will continue until it reaches the point of a serious economic, social, and inevitably, political crisis that forces something to be done about it. This is also consistent with the trends and warnings which have been noted for years that one of the major point to watch for in the 21st century will be wars over sources and the distribution of water, that if not the sole issue, will play a significant role. This will likely become especially prominent in East Asia, where the two billion-strong nations of China and India have already suggested a future war theater in the Himalayas, not just because of territory and historical differences, but for control over water source access that both nations need to supply their people. In Africa, this is also showing with the conflict in Tigray and the problems between Egypt and Ethiopia, with talk over war concerning Ethiopia’s control over the Blue Nile and Egypt’s dependency on consistent access to its water for social and well as agricultural uses.

The problem is a worldwide one, and it is not going away, and it is not limited just to the US. It will likely appear in different ways, and it is going to remain and grow into an important trend for the future.