You are here: Home › Bundeswehr Refuses To Provide Figures On Far Right Movements In Her Ranks 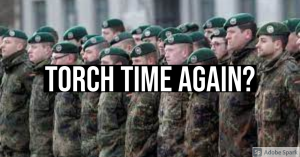 There have been several major law enforcement scandals in Germany over the past few years concerning a distinct rise in far-right political ideologies where National Socialism, Hitler, and other related things were found to not just exist, but have a strong, silent following. Given the mass migration of people from Africa and the Middle East to Germany and the social tensions it has caused, not only was this expected to happen, but when one recalls the long history of nationalism and militarism in Germany, the trends suggest that history is preparing to repeat again, with an attempt at national “revival” coming in the form of war. As such, these movements are not just isolated signs from disgruntled people but represent a bubbling, present and potentially serious threat to Germany and Europe.

While local and regional police departments have been forced to review and discuss such groups, the German military, the Bundeswehr, has also compiled reports on such in her ranks, but according to a recent report has refused to release her findings.

At the beginning of the year, the Military Counter-Intelligence Service reported 477 right-wing extremist suspected cases in the Bundeswehr in 2020. A request for current figures from two FDP members of the Bundestag has now been rejected.

The Bundeswehr refuses to publish current figures on right-wing extremism in its own ranks. A corresponding request from FDP members of the Bundestag Marie-Agnes Strack-Zimmermann and Benjamin Strasser had been rejected, reports the editorial network Germany. Most recently, in January, the military counterintelligence reported 477 suspected cases in the past year.

“Right-wing extremism in the Bundeswehr is a problem and needs to be named. But that also requires transparency ”, demanded the defense policy spokeswoman for the FDP parliamentary group, Strack-Zimmermann. It should not be the case that soldiers with anti-constitutional sentiments get away scot-free and that in the end it is those who are the bogeys who uncover grievances. “The fact that the Ministry of Defense continues to prevent this transparency in spite of all current incidents and withholds corresponding figures from elected parliamentarians is unacceptable.”

The FDP chairman in the interior committee, Strasser, added: “It seems as if the federal government simply no longer wants to disclose figures on right-wing extremist suspected cases in the Bundeswehr.” This undermines the commitment of Defense Minister Annegret Kramp-Karrenbauer (CDU) against right-wing extremism in the Troop.

“Analyzing which areas are particularly affected by right-wing extremist incidents is not a general suspicion,” emphasized Strasser. “We need reliable figures in order to be able to assess how the problem with right-wing extremist activities and, above all, the reporting behavior in the Bundeswehr is developing.” (source)

The fact that the Bundeswehr refuses to release the information could suggest any number of things, but it is not unreasonable that it may mean there is a lot more of such ideologies present than one wants to believe. Likewise, there is no sign that their presence is going to diminish, and if there was to be another wave of mass migration, such as what is being threatened from Africa due to the social, political, and economic conditions there, it could take the situation and make it into something far worse, possibly manifesting not just in torches and marches, but outright street violence against “non-Germans”.

If trends continue as they are, there is a strong possibility the cycle of history may repeat itself, and in a situation such as it this there is no good ending for anyone.