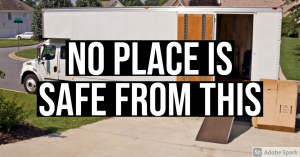 One of the trends that Shoebat.com has been watching is the changing political patterns do to the movement of Millennials and Zoomers across the country seeking job. While people talk about the “threat” of “migration”, in a sense it really is a threat, except the real enemy is not foreign persons but rather fellow Americans whose intra-national movements, mostly for economic reasons, are bringing their political and sociological baggage with them. Thus people from California, New York, and Illinois looking for jobs and moving to the southern or central regions of the US are taking areas traditionally associated with certain political leanings and inverting the order, as well as changing the culture and, in many cases, driving up prices. This is the real migration threat- it is not from without the US, but from within us, because it is the ability to realize our own national pathologies that becomes ever more present and possible not as an idea, but as a real thing. It was not thirty years ago that people would have never dreamed that Texas would become a “blue state”, and yet in five years from now, that is a reality so present that even the most hardcore right-wing individual must admit is now possible.

AP News recent did a story about this, noting how this intranational migration is transforming community dynamics.

The U.S. Census Bureau this coming week is expected to formally tally this change by releasing its count of population shifts in the once-a-decade reallocation of congressional seats. It’s is expected to lead to the Sun Belt gaining seats at the expense of states in the north.

The relocations have reshuffled politics. Once solidly conservative places such as Texas have seen increasingly large islands of liberalism sprout in their cities, driven by the migration of younger adults, who lean Democratic. Since 2010, the 20-34-year-old population has increased by 24% in San Antonio, 22% in Austin and 19% in Houston, according to an Associated Press analysis of American Community Survey data. In November’s election, two states that also saw sharp growth in young people in their largest cities — Arizona and Georgia — flipped Democratic in the presidential contest.

These demographic winners are almost all in the Sun Belt, but climate is not the only thing they have in common.

“These places are growing not just because they’re warmer, it’s because that’s where the jobs are and young people are moving there,” said Ryan Wiechelt, a geography professor at the University of Wisconsin-Eau Claire.

There are other drivers of population growth, such as immigration from overseas and childbirths. But as foreign immigration tapered off during the decade, then plummeted during the pandemic, internal relocations have become an increasingly big factor in how the country is re-sorting itself, demographers say.

Places with jobs have long attracted transplants, but this shift has been different because housing prices have risen so much in previous job clusters — Boston, New York and Silicon Valley, for example — that cost of living has become more of a factor in relocations, said Daryl Fairweather, chief economist for Redfin.

“Since the last housing crisis, young millennials have had to move to places with really strong job markets,” Fairweather said. “Now, during the pandemic I think that is changing — you don’t have to move to San Francisco if you want a job in tech.” (source)

The biggest lesson to take from this is that there really is, as far as the US is concerned, no ‘safe place’ for anybody to hide in any more. There is no place where people can go to just “get away” from a certain form of political ideology. In this sense, the US is mirroring a lot of what happened to Russia in the 20th century, where while there were remote places that one could go to have less influence, there was no ‘safe’ area anywhere in the country, whether one was in the most modern city areas or in the most remote districts of Siberia and the Far East.

The issue of politics is not a new problem either, but in typical American fashion, is the result of decades of not dealing with major social and political issues, ceding control to others rather that parents and families assuming responsibility for their actions, and as a result ideas that are ultimately destructive to any society were allowed to take root and grow. Some of these ideas were encouraged by those in power as a means of control against the common man. But regardless of what happened, the fact now is that the political results are coming home to stay, and with geographic distance no longer an obstacle, they can and will diffuse quickly throughout the nation, having both a uniformity effect (spreading the same effects equally and without regard to place) as well as the same effect in their own nature, thus generating the same, and often destructive, results. This also mirrors the shifting demographic landscape, where as the Boomers pass away, and the Millennials take power, they will speed up the rate of such changes, and since Millennials are inclined to atheism as well as secularism, they will most likely have far less mercy than the Boomers and be more inclined to embrace violent, destructive, or outright oppressive policies in the name of pursuing and realizing their particular ends, and that will most likely also have a longer-term effect than those of previous generations.

First The US, Now Mexico Is Having A Water Crisis
Bundeswehr Refuses To Provide Figures On Far Right Movements In Her Ranks
Follow