You are here: Home › Russia Puts US On The Top Of “Most Unfriendly” Nations List 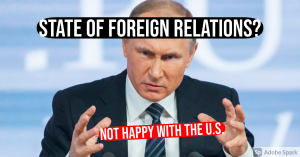 Every so many months, there are studies and lists of different kinds published talking about what nations are the “best” to live in, based on what often seems to be a random assortment of criteria. These are popular in the western world, and to a lesser extent (based on what I have seen) in Russia or the eastern world. There is an inherently political nature to this as well, since what is considered to be “best” or “good” for one nation or nations is not necessarily what is objectively the best or good in the moral or ontological sense.

In a less common move, Newsweek reports that Russia has put out a list of “most unfriendly” nations toward Russia, and the US is at the top of the list.

The U.S. has been placed on a list of countries Russia considers to be “unfriendly” despite optimism of a summit between Presidents Joe Biden and Vladimir Putin taking place this summer.

Russian foreign ministry spokeswoman Maria Zakharova announced over the weekend that the U.S. would be on the list following a presidential decree on April 23.

In a graphic on Russia’s Channel 1 headlined “List of countries unfriendly to Russia,” the U.S. was at the top.

Russian foreign policy analyst, Maxim Suchkov tweeted the list was only of “candidate states” currently being discussed, which he said had “ended up leaked.”

The list matched the countries named earlier by the Izvestia newspaper, which cited anonymous sources and also included Canada.

Kremlin spokesman Dmitry Peskov told reporters the list had not been finalized, and that he was “unaware, if there is something regarding the deadlines,” according to Tass. Newsweek has contacted the Russian foreign ministry for comment.

The list appears to be mostly symbolic and the consequences of being included on it are limited to Russian citizens being banned from working in diplomatic missions on Russian soil, Izvestia reported.

State Duma Committee member Oleg Shein told the paper that the notable absentees—Germany and France, were left off despite their frequent criticism of Russia. This was because Moscow considered they were sufficiently independent of Washington, DC and as such, “they are a negotiating party for us,” Shein said.

The list of “unfriendly countries” reads like a who’s who of nations Russia has engaged in diplomatic spats with recently. (source)

Cleary this is a political move, and one of Russia signaling her displeasure with the US. There is no surprise here in this. Russia and the US are going to have their differences because they are, as it has been for a while now, struggling for global dominance. What was more ironic, it seemed, was how there were additional nations listed as being “unfriendly”, and seven of those ten were former Soviet territories or satellite-influenced nations behind the iron curtain, and the other two were fellow members of the Anglosphere. Likewise, there was the curious absence of Germany and France from the list, in spite of their constant and open criticism of Russia.

As Newsweek correctly notes, the article is more a list of nations that Russia has had recent geopolitical disagreements with. That seven of those ten were formerly under Soviet influence of some kind speaks volumes about Russia’s frustrations with her inability, despite open attempts, to revive the USSR in its previous form. Regardless of what one things of Russia or the US, it is a clear fact that nations under Soviet influence underwent grave suffering and poverty, while those under US and NATO influence generally prospered economically. All of the form Soviet nations, and especially Czechia, Estonia, and Poland, have greatly benefitted from the fall of the Iron Curtain and have emerged in different ways as serious economic competitors. They don’t want to be pulled back into the Russia sphere of influence lest they not just lost, but are actively stripped of their gains and forced to suffer again.

It is not that former Soviet and Soviet satellite nations just ‘hate Russia’, but they hate what happened to them. It is also not to say that they love the US either, but that past experiences suggest future trends, and if Russia wants to revive herself to something of her previous state, it also means there are implications for her neighbors.

The absence of Germany and France is an even bigger clue to what is happening. While former Soviet bloc nations have prospered after the fall of the Iron Curtain, Germany is once again the ‘powerhouse’ of Europe, and she is moving, as she historically does, into what seems to be another nationalistic phase. This is not just a simple threat to Russia, but a grave one, for Russia is weaker now that she has been in over a century, mostly due to the enervating effects of Soviet policies, and twice in the span of a century Germany has almost conquered Russia. Unless Russia can do what she has historically done, which is to ‘pull’ Germany to her favor by encouraging her to invade and divide up Eastern Europe and the Balkans with her, Russia faces the serious possibility of an invasion by Germany or potentially, Germany in the context of a united European army. This is something that Russia could not fight against, as the US and UK would side against her, and if Germany does that, France, being historically inclined to support the tendencies of Germanic nationalism, will most likely follow along with her.

This is the analysis I have noted here at Shoebat.com. Germany is the future of Europe, for good or for evil, and he who can win her influence gets not only that of France and at least something of Turkey too, but also plays a deciding role in a future conflict. If the US has the influence, Russia cannot win a major war. If Russia has the influence, the US will not be defeated, but she will lose her power influence in Europe and will be forced to sit out of a major European conflict.

What we can see in this list from Russia is not just a simple ranting about geopolitics or anger at other nations, but through it an articulation of the Russian position, and more importantly, her fears on what may become of her future. The US, for all of her problems, barring a major natural disaster that physically realigns the nation itself, is going to survive as a contiguous unit. Russia is by contrast facing an existential crisis that due to a long and serious building up of problems with no answers given to them may result in Russia being rendered as an impoverished nation west of the Urals, left as a regional power but not a global power with the force she once wielded. She is in danger of losing control over Siberia, which is her main power base, as well as influence in Central Asia.

For all of this lists that may talk about a ‘best’ place to live, there really is none, as the whole world is becoming progressively more engulfed in chaos. However, as the prospect of a major global war becomes more realistic than ever before, and it would necessarily involve Russia, to see what position Russia will try to take, and the effects this may have on the future.