You are here: Home › Claim: Food Being Looted By Eritrean Soldiers From Tigray 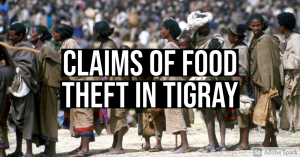 No conflict zone is ever an attractive place, but in Africa, conflict tends to result in some of the worst forms of human suffering, such as starvation, mass murder, and the total annihilation of large areas. According to France 24, there are reports now that Eritrean soldiers are looting Tigray of her food.

He said the move came in response to TPLF attacks on army camps and that fighting would be over quickly.

But as the war drags on, world leaders are increasingly concerned about what US Secretary of State Antony Blinken on Monday called an impending humanitarian “disaster” — and the role of Eritrean troops in exacerbating it.

Those concerns have been echoed in multiple presentations given to aid groups this month by the Emergency Coordination Centre of Tigray’s Abiy-appointed interim government — copies of which AFP has reviewed.

The most recent presentation, dated April 23, says Eritrean soldiers had forced aid workers providing food relief out of multiple parts of Tigray, including the areas of Samre and Gijet south of the regional capital Mekele.

It says, in broken English, that Eritrean soldiers have also started showing up at food distribution points in Tigray, looting the supplies after “our beneficiaries became frightened and (ran) away.”

An official who attended the April 23 presentation, and who spoke to AFP on condition of anonymity for fear of reprisals, said aid workers were visibly frustrated over their inability to access parts of the region.

“Some of the NGO workers were crying because of the systemic denial… some of them were screaming, crying,” the official said, adding that government officials coordinating relief efforts were also fed up.

Now the whole Tigrayan situation is a complete nightmare. As I have reported before, the region is primed for mass migration. Recall that it was in 2015 and 2016 that a large number of migrants came from Eritrea alone, fleeing violence in their country that has erupted in part into the current Tigrayan crisis. Tigray, being that it is a rebellious are since at least the 19th century due to dissatisfaction with agricultural policies, has been backed by NATO as a part of the US-USSR proxy wars fought all over the world during the twentieth century, with the USSR backing the socialist Derg that overthrew the last King of Ethiopia, Haile Selassie, in 1974.

Due to Tigray’s location as a crossing ground for the mouth of Blue Nile, her serving as an access point to Sudan Ethiopia, and Tigray, and her history with NATO, her position could result in a balkanizing effect in East Africa, where regional fighting emerges similar to what happened after the dissolution of Yugoslavia in 1994 under Clinton, except this could become the same under Biden in 2021 or 2022.

But the bigger issue is the humanitarian crisis that could lead to a mass exodus of people from the region. People don’t migrate without a reason, and when they do migrate, usually it is because they are unable to meet their economic needs in the current region, or the social conditions have deteriorated so badly they are seeking another life somewhere else, and both can be said about that region in northeastern Africa The people are impoverished, there are no jobs, there is a lot of chaos, not a lot of hope, and a lot of violence, plus no or limited food resources. This is not a place to live in, let alone raise a family in. If conditions continue, naturally, there are going to be many people who will want to migrate, and given the natural, migratory patterns of the past, they would go, most likely, north towards Egypt. At this point, it would not be unreasonable to believe they could cross to Europe, especially if like during the last crisis half-a-decade ago, there are smugglers who help them into Europe. If Germany extends an ‘invitation’ to migrants- like with what happened in 2015 -it could become a repeat of that period, except now, there is a lot more hostility towards migrants, and with that it not only would promote a surge of nationalism, but could encourage militaristic thoughts and even actions to take recognizable form.

But for right now, the trends of violence in Tigray must be watched. Depending on what happens, and if fighting or human suffering intensifies- and it has been reported daily in the news media almost consistently since the conflict began in Fall 2020 -then it provides an ideal justification for joint-NATO intervention into that region, since the US would not go in there alone, but most likely with other European nations and share responsibility for ‘peacekeeping’. It will also thus be another trend to watch and see, considering the massive upgrading to the capabilities for deployment of Bundeswehr force, if the said intervention happens, that they will stand alongside US troops on the ancient soils of Axsum.