You are here: Home › Navy SEALS Shift From Counterterrorism Operations To “Global” Operations Against China, Russia 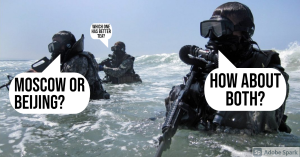 If one asked a military commander for the last two decades what the largest threat for US Special Operations to combat was, the answer would almost universally be some form of ‘terrorism’ as a response. While terrorism does indeed pose a threat, the practical reality is that terror groups lack the manpower, money, logistics, technological development, resources for exploit, processing machinery, organization, and influence to win an all-out ‘traditional’ war. This even appears in poor nations, such as those in Africa or South America and parts of Asia, that while being national militaries, are at their very best regional powers, if even that can be maintained. The true tiers of global military power are generally reserved for those who can make the above pieces “fit” in a useful way, and these are only among the most powerful and influential nations in the world such as the US, Russia, China, UK, France, Germany, Turkey, Japan, and India.

One of the trends that we have warned about to watch for is a shift away from “counterterrorism”- or what could be called small-group operations -to larger-scale operations against nations themselves in traditional-force type arrangements, since this would be a sign suggesting preparations for a major global war or otherwise serious conflict of a like nature. There has been talk of this among the military as well as by military contractors, but no real public, verifiable, confirmed evidence of such realignments yet. This changed with a story from the Associate Press discussion how the Navy SEALS are now being reorganized from small, anti-terror cells to larger units for the purpose of combat against Russia or China.

Ten years after they found and killed Osama bin Laden, U.S. Navy SEALs are undergoing a major transition to improve leadership and expand their commando capabilities to better battle threats from global powers like China and Russia.

The new plan cuts the number of SEAL platoons by as much as 30% and increases their size to make the teams more lethal and able to counter sophisticated maritime and undersea adversaries. And there will be a new, intensive screening process for the Navy’s elite warriors, to get higher-quality leaders after scandals that rocked the force and involved charges of murder, sexual assault and drug use.

Rear Adm. H. Wyman Howard III, top commander for the SEALs, laid out his plans in an exclusive interview with The Associated Press. He said the Navy’s special operations forces have been focused on counterterrorism operations but now must begin to evolve beyond those missions. For the past two decades, many have been fighting in the deserts of Iraq and mountains of Afghanistan. Now they are focused on going back to sea.

That decision reflects the broader Pentagon strategy to prioritize China and Russia, which are rapidly growing their militaries and trying to expand their influence around the globe. U.S. defense leaders believe that two decades of war against militants and extremists have drained resources, causing America to lose ground against Moscow and Beijing.

The counterterrorism fight had its benefits, allowing the SEALs to sharpen their skills in developing intelligence networks and finding and hitting targets, said Howard, who heads Naval Special Warfare Command, which includes the SEALs and the special warfare combatant-craft crewmen. “Many of these things are transferable, but now we need to put pressure on ourselves to operate against peer threats.”

As a result, Howard is adding personnel to the SEAL platoons to beef up capabilities in cyber and electronic warfare and unmanned systems, honing their skills to collect intelligence and deceive and defeat the enemy.

“We are putting pressure on ourselves to evolve and understand our gaps in capability and what our true survivability is against these threats” posed by global competitors, he said. (source)

This warning is what, unfortunately, I feared would come to pass at some point.

The signs of a global war, and there are many, have been present since the end of the Second World War, recalling that the US herself based on all documents declassified by the CIA suggested that such a conflict would happen by the mid-1960s, and thankfully did not. However, the desire was still there, and the last two decades, beginning with September 11th, set in motion the fundamental transformation of the US, the global economy, the technology sphera, and state of relations between nations to such a point that as unique and historically atypical as they seem today, that they are more a reflection of conditions prior to World War I than many would realize or admit.

Barring a miracle, the world is going to go back to war, and considering the weapons employed today and the population density and distribution, it would not be unreasonable to believe that a billion people might die.

Watch for the trend of force restructuring and realignments, and within that, note particularly where these alignments will happen. Major fields that I am currently watching, and will continue to report on, are the Arctic region, the Himalayas, and southeast Asia, since the first is where Russia is attempting to “hole” herself up into in preparation for war as well a build a sea passage from Murmansk to the Far East, the second is already a hotly contested area of Asia where China and India have been fighting intensely, and the third is another area that saw a lot of fighting in the Second World War as well as is another area where India and China will likely fight for influence given the border disputes on the McMahon Line.

Peace is always a difficult thing to achieve, and periods of peace in history are rare. One might say that since the Second World War, in spite of various conflicts in select regions, there has existed a kind of “Pax Americana” that has kept the world bound together and from exploding. Unfortunately, as the US economy unwinds, mostly due to her own actions, that peace will likely also unwind, and the world as it has been for so long will return to a state of barbarity.

Claim: Food Being Looted By Eritrean Soldiers From Tigray
The Manipulation Of Blacks To Hate The Police Is The The Spirit Of Rebellion And The Revival Of Nimrod
Follow