You are here: Home › It’s time for Karl Rove to come clean about what he knew

After publishing this post yesterday, which included a photo circa 2000 that shows Abdurahman Alamoudi meeting with George W. Bush and Karl Rove, I decided to look into the book that Rove was quite likely given by the delegation seen in the photo. It’s entitled, The Cultural Atlas of Islam and was written by a man named Ismail Al Faruqi in 1986. 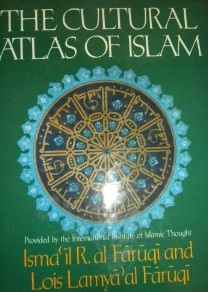 Now, obviously, Karl Rove cannot be held accountable for accepting a book from a group he met with; it happens all the time. In fact, in 2009, Barack Obama accepted a far left-wing book from Hugo Chavez. That made news because Chavez wanted to make a public spectacle of himself.

However, there were red flags raised by the Secret Service and Intelligence officials relative to both Alamoudi and Sami Al-Arian. Yet, Bush and/or Rove met with them on more than one occasion after this book was put into Rove’s hands. If there were suspicions about Alamoudi prior to these meetings, wouldn’t it have been prudent to investigate the author of material this group felt was important enough to put into Rove’s hands?

According to Newsweek, via History Commons:

Yes, Alamoudi visited the White House after 9/11. As it turns out, Al Faruqi is identified as the founder of one of the Muslim Brotherhood front groups listed as unindicted co-conspirators in the Holy Land Foundation trial (HLF). That group is the Association of Muslim Social Scientists of North America (AMSS). Here is what Discover the Networks says about AMSS:

AMSS describes itself as “an independent membership-based organization that encompasses the United States and Canada.” It has no corporate, legal or financial relationship with any organization bearing the name of AMSS in any other country. Its mission is “to provide a forum through which Islamic positions on various academic disciplines can be promoted, with an emphasis on the social sciences and humanities”; to further “the continuity of the Islamic intellectual heritage”; and “to serve the interests of the larger Muslim community by bringing together Muslim and non-Muslim scholars in an academic setting to examine and define Islamic perspectives on issues of global concern that contribute to the prosperity of Muslims around the globe and the betterment of humanity.”

AMSS collaborates with the International Institute of Islamic Thought to publish the American Journal of Islamic Social Sciences (AJISS), which is distributed in more than 50 countries around the world. Launched in 1984, AJISS is an interdisciplinary publication of scholarly research on all facets of Islam and the Muslim world: politics, history, economic philosophy, metaphysics, psychology, religious law, and Islamic thought.

So, the author of the book given to Rove in 2000 was closely affiliated with the Muslim Brotherhood, a group that has pledged to work toward the destruction of the United States. The International Institute of Islamic Thought (IIIT), another unindicted co-conspirator in HLF also lists al-Faruqi as its founder.

Are we to believe that the Bush administration did not know of the nefarious intentions of these individuals and groups?

Take a look at an article written by Franklin Foer on November 12, 2001 that was published by The New Republic:

On the afternoon of September 26, George W. Bush gathered 15 prominent Muslim- and Arab-Americans at the White House. With cameras rolling, the president proclaimed that “the teachings of Islam are teachings of peace and good.” It was a critically important moment, a statement to the world that America’s Muslim leaders unambiguously reject the terror committed in Islam’s

To the president’s left sat Dr. Yahya Basha, president of the American Muslim Council, an organization whose leaders have repeatedly called Hamas “freedom fighters.” Also in attendance was Salam Al-Marayati, executive director of the Muslim Public Affairs Council, who on the afternoon of September 11 told a Los Angeles public radio audience that “we should put the State of Israel on the suspect list.” And sitting right next to President Bush was Muzammil Siddiqi, president of the Islamic Society of North America, who last fall told a Washington crowd chanting pro-Hezbollah slogans, “America has to learn if you remain on the side of injustice, the wrath of God will come.” Days later, after a conservative activist confronted Karl Rove with dossiers about some of Bush’s new friends, Rove replied, according to the activist, “I wish I had known before the event took place.”

Again, it’s time for the highest members of the Bush administration – including Karl Rove – to come clean about who they met with, what they knew about them, and why they continued meeting with them after they knew it.

The stakes are too high and the jig is very close to being up.

Ben Barrack is a talk show host and author of the upcoming book, Unsung Davids