You are here: Home › Just Who Are These Masked Men?

Just Who Are These Masked Men?

As the riots in Egypt continue, various pundits are labeling the violent mob as a conservative group. For example, Hani Almadhoun has described the rioters as “Ultra-Conservative Muslims”, and Holly Williams from CBS described the beginning of the situation as such: “thousands of conservative Muslims marched on the embassy, furious about an American-made film they believe mocks the prophet Muhammad, the worst insult in the Islamic religion.”

But the actions of the rioters have no trace of conservative values, but exemplify, in truth, the riotous nature of anarchists. If one looks at some of the photos of the Egyptian mobs, one will find numerous of their partakers wearing the Guy Fawkes mask from the film V For Vendetta, which promotes anarchism and leftism. The film portrays conservative values as tyrannical, totalitarian, and having hatred for the Koran, while supporting homosexuality and Islam. Just to get an example of the film’s leftist sentiments, here is a clip from it expressing the beauty of the Koran, and hatred for the Queen of England:

Here is a group of Egyptian rioters wearing the mask: 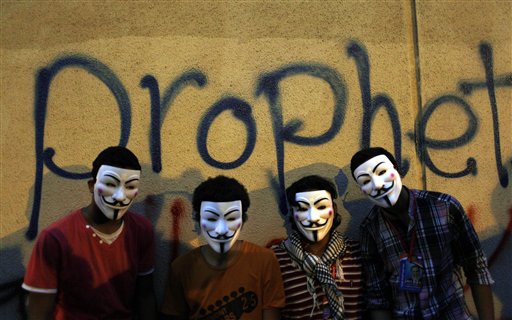 And here is the mob destroying the American flag (notice the hooligan at the far right edge of the flag wearing the mask): Videos from Egypt with these masked vigilantes have flooded the internet, and they are all connected with Islamic fundamentalism. Just to give an example, in a video which was released by Egyptian revolutionaries, a masked man says “Our cries to the martyrs, and our brethren, and the retribution will not be obtained by someone else. We must carry out the law in our own hands.” Another masked Egyptian revolutionary says: …Anyone give me the orders, and I will be Abdul Mamur (servant of whoever gives the order).” The video ends with a verse, not from the Bible, but from the Koran: “In punishments you have life, O followers of wisdom, that ye may have fear…”

Here is the video:

How could one say that these are conservatives, when in reality they are wearing masks popularized by a leftist film? Now lets not forget that the V for Vendetta mask was popular, not amongst the Tea Party, but the Occupy Wall Street protesters, and other leftist groups. Before the RNC event took place this year, protestors against it had spray painted the V character with the same mask on a building about a mile away from the location of the said event:

The similarities between leftism and Islamism are many, but the two which are the most major are their hatred for Western Civilization, and their animosity for Christianity. No conservative would express respect for either one of these, but leftism is inherently against them. Islam is not conservative, but a collectivist ideology which demands for a universal empire in which all peoples are forcefully united under a single belief system–the Koran. Islam has no respect for any government, just as anarchism regards no sovereignty but that of the mob. In other words, they are perfect bedfellows.

—
Theodore Shoebat is the author of the book, For God or For Tyranny
tedshoebat.com