You are here: Home › Did Black Lives Matter Just Do Something Really Good?

For many people, saying “black lives matter” and “doing good things” is akin to saying “getting a root canal” and “something fun to do today”. However, while we must recognize that which is bad, it is always prudent to point out that bad groups can, intentionally or not, do good or insightful things that help others.

To this I wish to point to a video that I saw on Youtube of the current riots taking place in Minneapolis. I have been listening to both sides, and while the voices were few, I have heard allegations made from both “white” and “black” groups that while the riots are real, that undercover police have been worsening the conditions of the riots by encouraging the looting of stores, that some have been starting fires, and that the fire department has been ordered to stand down and let the fires spread without controlling them. Such theories, while unproven, align with the position I have articulated that the protests are unnatural and are being allowed or encouraged by the government in order to use them as a justification for social control.

I have been unable to find any evidence until recently to corroborate such a statement. It is this video on Youtube, which I have re-uploaded here, that I speak of. There are allegations that Youtube has been taking it down, so I have put it here for your observation and consideration.

In the video, you can see the protest taking place, and then suddenly a man in what looks like a gas and face mask and carrying an umbrella takes a hammer and starts randomly busting out the windows of an AutoZone. He seems to be the first person to do this, as it appears prior to this nobody was going into the store. He breaks the windows and starts to walk away, which does not make sense since if somebody was going to loot, he would not just break windows and walk away. As he is walking away, seemingly trying to escape from the view of the crowd, he threatens to attack the person holding the camera filming his actions.

Who was this man? According to a recent post from Black Lives Matter, which also seems to have been repeatedly taken down and which we have reuploaded here, they claim- with a photo comparison -that this person was a police officer for the Minneapolis PD. Likewise, there are rumors that a woman who claims to be his ex-wife says that she recognizes that the man is an officer. 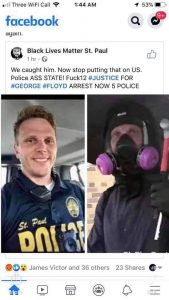 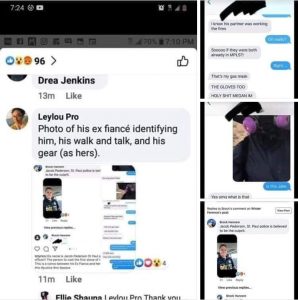 When these concerns were brought to police, they simply denied everything and dismissed the matter. 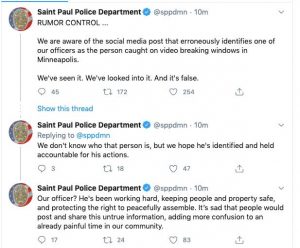 Now the face is covered, and one doesn’t want to jump to conclusions. However, I can say that in my opinion, if I was looking at these photos in any context- politicized or not -I would say that the photos are a likely match, and the additional information is something that needs to be seriously considered and examined.

Reddit gave further details as it noted the black man in the pink shirt in the video seems to have been working with the suspect earlier in question.

Now I want to make very clear that I do NOT encourage jumping to conclusions. I am presenting this information here for public consideration and examination, as public actions and questions merit a public query.

However, one should keep in mind that the US has a long history of “false flag” conflicts, where agent provocateurs are paid to cause problems in order to incite violence or chaos in order to use said chaos for further political ends. Hence, the question that what one may have (but not conclusively proven) witnessed was an agent provocateur caught in the act of provoking looting and rioting is not something that can be casually dismissed, and with the amount of detective work done by people of good will, including those in Black Lives Matter, mere disagreement with political ideology does not justify dismissing a serious inquiry into the matter.