You are here: Home › Erdogan’s Military Advisors Announce Their Hidden Plan To Invade Jerusalem By A Massive Invasion Of The Muslims

By Shoebat Foundation on March 12, 2018 in General, Highlight, Israel

Its all there in black and white and is clear as crystal: the nations of Ezekiel 38 are forming to invade Israel. Just take a look at the colored map from Erdogan’s main mouthpiece Yeni Shafak reveals all: a planned invasion of Jerusalem by the very nations in Ezekiel 38.

Tanks, foot soldiers, ships and subs with air strikes stemming from as far as the Stans (Uzbekistan, Tajikistan, Turkmenistan …); the biblical Gomer and Beth Togarmah. Even what was biblical Kush and Put (Sudan, Somalia, Libya) are on the planned map. It can’t be any clearer than this.

The article by Turkey’s main government media Yeni Safak was intended to encourage the Muslim populace to unity and the map (in green) reveals the flying dragon honing on the red little spec (Israel). 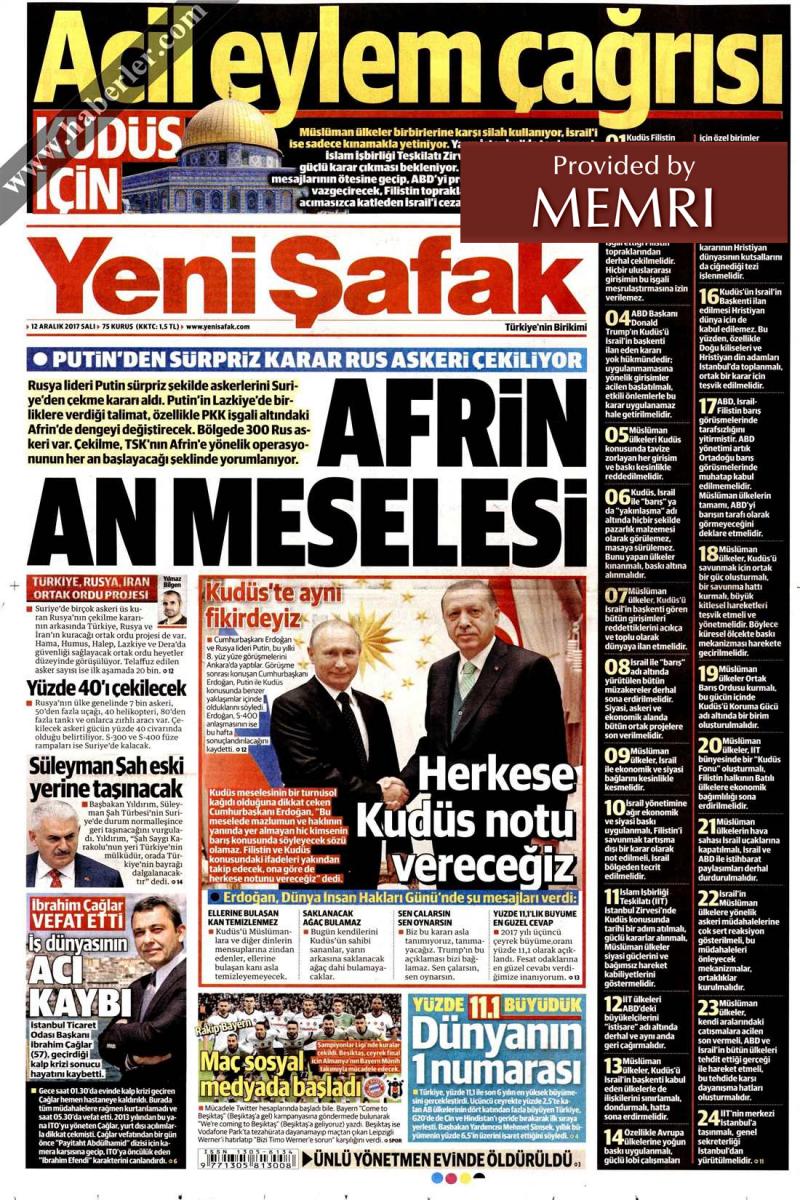 On December 12, 2017, ahead of the summit of the Organization of Islamic Cooperation (OIC) in Istanbul,  the Turkish daily Yeni Şafak, which is close to President Recep Tayyip Erdoğan and his ruling AKP party, published an article  titled “A Call for Urgent Action,”[1] which also appeared on the paper’s website under the title “What If an Army of Islam Was Formed against Israel?”[2] The article called on the 57 member states of the OIC to form a joint “Army of Islam” to besiege and attack the state of Israel. It notes that such a joint army will greatly exceed the Israeli army in manpower, equipment and budget, and presents statistics to prove this. It also advocates establishing joint bases for the army’s ground, air and naval forces that will arrive from all over the Muslim world to besiege Israel, while noting that Pakistan, as the only nuclear country, has “a special status” among the OIC countries. An interactive map provides information on military forces stationed in various locations and the role they can play in the potential joint Muslim attack on Israel.

The Source Of The Yeni Şafak Article: The SADAT Company Website

The main points of the article are taken from the website of the Turkish SADAT International Defense and Consulting Company, which provides consultancy on defense and warfare, both conventional and unconventional, and on military organization, training and gear. The company has an agenda of promoting pan-Islamic military cooperation. According to its mission statement, it seeks “to establish defense collaboration and defense industry cooperation among Islamic countries, to help the Islamic world take its rightful place among the superpowers by providing… strategic consultancy and training services to the militaries and homeland security forces of Islamic countries.”[3]

According to Israeli security sources, the SADAT company is involved in aiding Hamas, and seeks to assist – with funds and military gear – the creation of a “Palestine Army” to fight Israel.[4]

The SADAT company was founded by Erdoğan’s senior advisor on military affairs, retired general Adnan Tanrıverdi, and is chaired by his son, Melih Tanrıverdi. Adnan Tanrıverdi (b. 1944) served in the Turkish army’s Artillery Corps and headed the Home Front Command in northern Cyprus.  He is an expert on assymetric warfare, and was dismissed from the Turkish military in 1996 for his Islamists leadnings. A former Turkish army officer, Ahmet Yavuz, described him as “an enemy of Atatürk” and stated that his dismissal from the army was not surprising.[5]

The Yeni Şafak article is based on a PDF booklet featuring a number of articles by Tanrıverdi, as well as other materials, that appeared on the homepage of SADAT’s website and has since been removed.[6]

“This Wednesday, Istanbul will host an extraordinary summit of the Organization of Islamic Cooperation, at which decisions on military and economic issues will presumably be made. In this framework, it becomes evident that the member states’ [joint] military might greatly exceeds that of Israel. Moreover, in a possible military operation, this superiority [can] be realized on the ground by [setting up] joint military bases for ground, air and naval forces. Below are a map and statistics presenting a comparison between Israel and the [proposed] Army of Islam…

“What If An Army Of Islam Was Formed Against Israel?

“If the OIC member states unite and form a joint military force, it will be the largest army in the world. These countries’ total population is 1,674,526,931. The number of soldiers in active service in these countries is at least 5,206,100. Their [overall] military defense budget, of $174,728,420, is also worthy of emphasis.

“As for Israel, it is significantly inferior. The population of this country, which attempted to occupy Jerusalem while surrounded by Muslim states, is 8,049,314. Note that the population of Istanbul alone exceeds 14 million. The number of soldiers in active service in the [Israeli] occupation forces is 160,000, and [Israel’s] defense budget is approximately $15, 600,000,000.

Infographic comparing the OIC countries with the Israel:

“Among the decisions that can be taken at the OIC [summit] is to form a ‘Jerusalem Task Group.’ In this framework, military steps are likely to be taken. The [Muslim] armies, ranging from Africa to Asia, surpass the Israeli [army in might]. So if an Islamic army is formed, Israel will be under a siege.

“At The First Stage: 250 Thousand Soldiers

“In a possible military operation, the first step is expected to involve 250,000 soldiers, and the establishment of joint land, air and naval bases for use in the short term.

“500 tanks and armored vehicles, 100 war planes, 500 attack helicopters and 50 warships and submarines can be mobilized.

Interactive map providing information on particular bases and missions in a possible operation against Israel. Clicking on various locations provides the following information, for example:

“Eskişehir – Konya – Kilis:  In case of a military operation, air bases in various locations will house 100 planes and 500 attack helicopters, and also serve as reinforcement and supply bases. 250,000 military staff, including pilots, will be ready for duty.

[Northern] Cyprus: In case of a military operation, the 50 warships and submarines stationed in naval bases can take an active role [in the fight] against Israel in the Mediterranean and the Red Sea. The Turkish navy, among others, will participate in the operation. Together the forces will comprise 250,000 men.

“The war planes that will be dispatched to the region from greater distances will be stationed in airbases [closer to Israel]. Israel will most likely to be besieged by the naval fleets that will be sent to the Mediterranean and the Red Sea.

“The military capability of the OIC member states is considerable. These armies have the necessary equipment to carry out a military operation on land, sea and air.

“Even Turkey Alone Is Superior [To Israel]

“Turkey will serve as an important headquarters during the operation, due to its land, air and naval infrastructures. The Turkish army, which carried out ‘Operation Euphrates Shield’ [in Syria in 2017] with great success, is now ranked the world’s seventh strongest army, and the second largest army among the NATO powers. Turkey has approximately 4,000 tanks and 1,000 war planes and other aircraft. Its navy made significant progress during the last years, with 194 vessels at its disposal.

“As the only country which possesses nuclear weapons, Pakistan has an important status among the 57 Muslim [OIC] countries…

“In a statement, Malaysian Defense Minister [Hishammuddin] Hussein described Trump’s recognition [of Jerusalem as Israel’s capital] as a blow to Muslims, and added: ‘The Malaysian armed forces are ready to fulfill their duty regarding Jerusalem.’

“In recent years, Turkey has launched a series of collaborations with [OIC] member states. The joint military drill with our Iraqi neighbors conveyed a clear message to the terrorists, and Turkey is [also] engaging in new collaborations with Qatar, Somalia and other Gulf and African countries. In this context it should be underlined that Turkey is taking steps to realize the model of the ‘Army of Islam,’ forging alliances with many Muslim countries to increase its military mobility.”

[6] The booklet is available from MEMRI upon request.

Gunmen in North Carolina kidnap pastor’s wife and hold the pastor at gunpoint, they bring the pastor’s wife back and burn her alive
New Strain Of Drug-Resistant HIV Discovered In The Philippines Prepares To Devastate The LGBT
Follow