You are here: Home › Right-wing Agitators Are Using The George Floyd Riots To Foment A Race War

There are reports coming out about Right-wing provocateurs infiltrating the George Floyd demonstrations, with some talk about them trying to use the situation to spark a race war. According to Mia Bloom:

Minnesota Governor Tim Walz echoed this sentiment in a press conference on Saturday alleging that the demonstrations that caused so much damage included provocateurs, likely from outside the area. At the same press conference, Saint Paul Mayor Melvin Carter stated, “Every single person we arrested last night, I’m told, was from out of state.” State officials said around 80 percent of those arrested in the Twin Cities on Friday were from outside Minnesota. Former FBI agent and CNN commentator, Josh Campbell wrote, that Minnesota “authorities have been monitoring alleged criminals online, including postings by suspected white supremacists trying to incite violence.”

Experts on political violence (and not just Qanon conspiracy theorists) shared stories on social media that the May 27 looting and arson at AutoZone by an unidentified man in a gas mask carrying an open umbrella (dubbed #umbrellaman) was not necessarily a protester but could be an agent provocateur or member of the police. In video posted to YouTube, while this man smashed windows with a hammer, protesters at the scene accused him of being an outsider and began to film him.

According to reporting in the Atlanta Journal-Constitution, “The man’s actions were so odd that other rioters in the area paused their own protests to call him out and began filming. “Are you a f—ing cop?” someone else can be heard yelling to the man as he disappeared from view.”

Bloom goes on to write on “the accelerationists” or Right-wing provocateurs who want to agitate tensions with the hope of accelerating a race-war:

The demographics of a largely white, young, and destructive group fit more with a movement known as accelerationists than Black Lives Matter.

The accelerationists, if you have never heard the term, are an extreme subset of white nationalism whose goal is to bring about chaos and destruction. The basic tenet of accelerationism argues that since Western governments are inherently corrupt, the best (and only) thing supremacists can do is to accelerate the end of society by sowing chaos and aggravating political tensions. “Accelerationist ideas have been cited in mass shooters’ manifestos — explicitly, in the case of the New Zealand killer — and are frequently referenced in white supremacist web forums and chat rooms,” Zack Beauchamp explained.

White Supremacists pretending to host a protest to honor Floyd George on Facebook to whip up violence in San Diego were posted on Black Lives Matter-San Diego social media, warning people not to go and that it was a white supremacist-organized rally. People attending demonstrations remarked on the fact that the demographics were wrong in places like Oakland, where the majority of the destruction was perpetrated by young, Caucasian men, and has inspired not just people on social media but reporting in the mainstream media to properly question whether this is a form of infiltration by outside extremist elements.

Vice News’ Tess Owen wrote about the Bugaloo Bois, anti-government extremists recognizable by their Hawaiian shirts, that “in addition to their physical presence at the protests, the #boogaloo hashtag on social media has been flooded with memes in the last couple days egging on violence, and talking about how they hope this is the beginning of a civil war.”

The Vice Magazine report also specifies how “hardcore ‘accelerationists’ … are encouraging their neo-Nazi followers to go to the protests and carry out acts of violence against black people.” There’s a photo of a protestor who hashtagged the photo with “#bugaloo”: 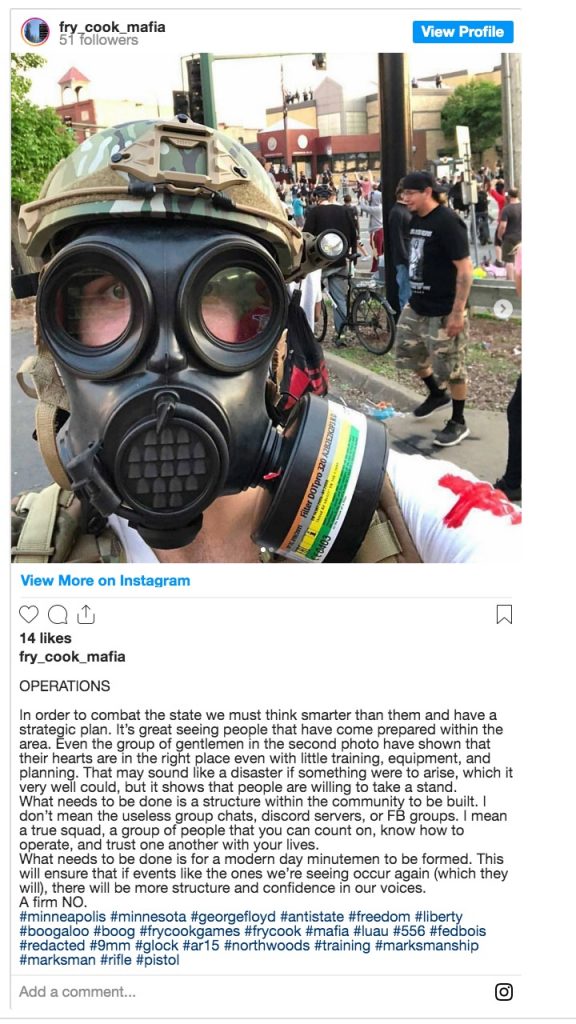 New US Military Sniper Rifle Can Fire Three Different Calibers Of Bullets
The Government Of Minnesota Announces: Some Rioters Have Ties To White Supremacy Groups
Follow