You are here: Home › ISIS Has Returned: ISIS Terrorists Hunt Down Christian Man Because He Helped Build A Church, Brutally Beat Him, Keep Him Captive For Three Months, Break His Teeth And Execute Him

ISIS has apparently returned as an execution of a Christian by their terrorists has just been recently reported. Nabil Habashi Salama, a Coptic Christian, was hunted down by ISIS thugs who wanted to kill him because he took part in the construction of a parish, St. Mary Church. They captured him, brutally beat him, and put him in the back of a vehicle. They broke his teeth and held him in captivity for three months before executing. Peter Salama, his son, reveres his father as a martyr and a saint in heaven:

“We are telling our kids that their grandfather is now a saint in the highest places of heaven … We are so joyful for him.” 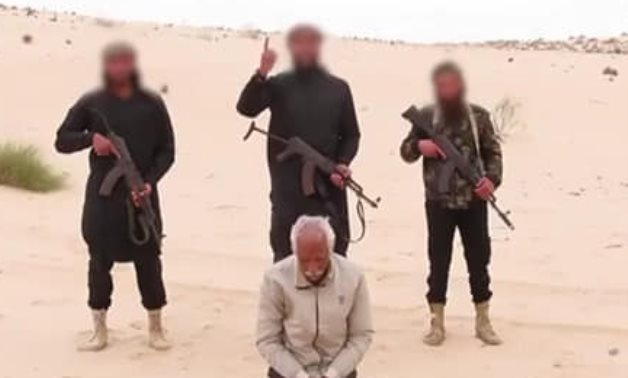 The Salamas trace their roots into far antiquity, being one of the oldest Christian families in Egypt. ISIS released a video showing Salama’s execution. He is seen on his knees in a very sad condition. The murderers in the video declare that all Christians in Egypt will share the fate of this old man if they do not acquiesce to their demands. In the video, in typical Islamist manner of coercion to make their victims confess what offends Islam, Salama admits that he established a church in the town of Beir el-Abd in North Sinai, and he also stated that the Orthodox Church in Egypt works with the Egyptian military and intelligence. To ISIS this was the admission of a crime worthy of Christian blood, and Salama was shot in the back of the head. The video is presented with a message to “all crusaders in the world” and states to Christians: “As you kill, you will be killed, and as you capture, you will be captured.” They also added that the Egyptian military has a “long bill” to pay, and vowed to war against its soldiers. ISIS also state that anyone who supports the military is an apostate and further threatened that the army  “cannot even protect itself, oh fools, we have come to you with cut-throats.”

The life of a Christian can be absolutely horrifying. The reality of being kidnapped, tortured and murdered for merely building a church is unfathomable. While we entertain the delusions of criminal lovers who speak of cops ‘hunting down blacks’ when the reality is that they are merely making a cult of crime, people are literally being hunted down for merely taking part in the construction of a church.  Nobody wishes to speak of martyrs, although they abound; people wish to make false martyrs, and spread their cult throughout; false martyrs take the tongues of the masses, for they are legion.