You are here: Home › Turkey And Azerbaijan Train To Kill More Armenians

By Shoebat on October 7, 2021 in Featured, General, Highlight 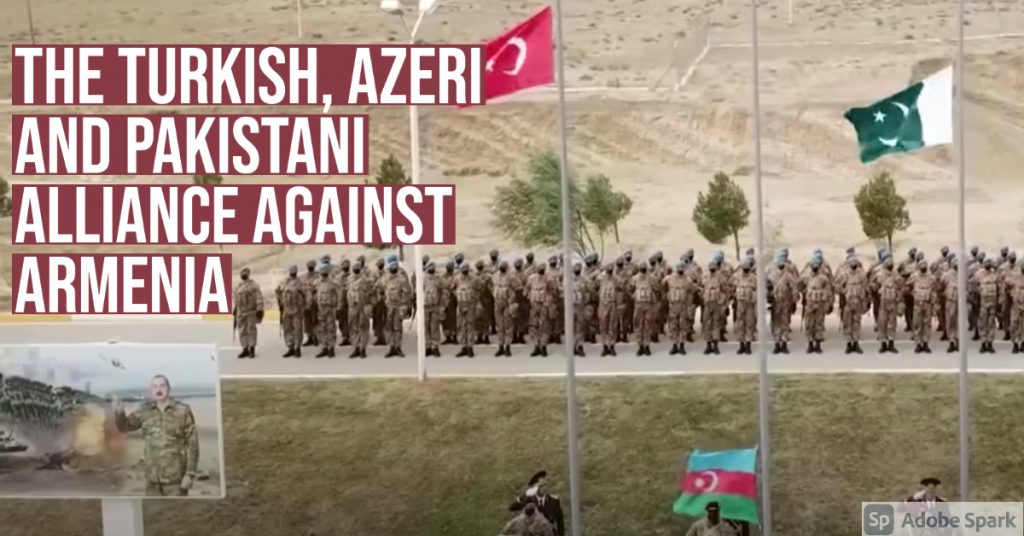 Turkish, Azeri and Pakistan troops together, as part of their training exercise in Baku

The Turkish and Azeri militaries have been doing joint training operations in the Azeri Nakhchivan region which borders with Armenia. The training program is called “Unshakable Brotherhood” and was planned to run from October 5 to October 8, and it is being conducted in the midst of violent tensions between Azerbaijan and Armenia. According to Radio Free Europe (referencing the Turkish Defense Ministry) the training program includes “mechanized, commando, aviation, and drones.” Commando (according to the Webster dictionary) signifies “a military unit trained and organized as shock troops especially for hit-and-run raids into enemy territory.” The drone training is obvious: Azerbaijan is training how to effectively utilize Turkey’s Bayraktar TB2 drone, which is currently one of the world’s most dangerous unmanned ariel vehicles (it is also one of the most demanded for in the defense industry market). The Bayraktar drone is the reason why Azerbaijan won the war against the Armenians in 2020. It can fly 27,000 feet up in the air (its operational altitude is 18,000), it can travel up to 150 km, and it can fly for 27 hours. The Armenians, not having any of this type of technology, were like fish in a barrel; completely trapped, and not knowing when the strike was going to come.

Thousands of Armenian soldiers were slaughtered (roughly 5,000), giving the victory to Azerbaijan, and ultimately to Turkey, which sees Azerbaijan as an extension of itself. Why is Turkey and Azerbaijan conducting this training program? Well, since they are training with drones, and they are also training in commando strategy which involves hit-and-run raids into enemy territory, it is safe to say that they are planning on killing more Armenians and — ultimately — they want to invade Armenia. They are training in Nakhchivan, which borders with both Armenia and Turkey. Thus, Armenia is sandwiched in between Turkey — a country that tried to annihilate the Armenians in World War One — and an extension of Turkish power, Azerbaijan. Armenia is in a situation similar to that of Poland, which is sandwiched in between Russia and Germany both of which butchered millions of Poles during the Second World War. It would be an understatement to say that Armenia is in a terrible position. Meanwhile, Russia is seeking to establish a trade block between itself, Turkey, Iran, Azerbaijan, Georgia and Armenia. According to al-Andalou:

The format will address the issues of security, unblocking economic and transport ties, Lavrov said at a news conference following a meeting with his Iranian counterpart Hossein Amir-Abdollahian in Moscow.

Once you look at a map, it makes perfect sense as to why Turkey backed Azerbaijan to retake Nagorno-Karabakh. Nagorno-Karabakh borders with a region in Armenia called the Syunik Province which also borders with the Azeri region of Nakhchivan. Turkey and Azerbaijan want a corridor built (which would be called the Zangezur Corridor) that would run through Syunik and thus link Azerbaijan with Nakhchivan. Nakhchivan borders right with Turkey, and with Nagorno-Karabakh no longer under Armenian control, the region is no longer an obstacle to Turkey and the Turks can move right from Nakhchivan through the corridor into Azerbaijan where they would, in the future, move right into the Caspian and thus into Central Asia. Armenia has thus been an obstacle to the aspiration of a pan-Turkist empire led by Turkey. In the words of Stephan Piligian: “Turkish expansionism moves east to central Asia. Armenia is a physical and ideological obstacle. Some things don’t change, especially when the current leader attempts to bring Turkey back to its Ottoman past.” 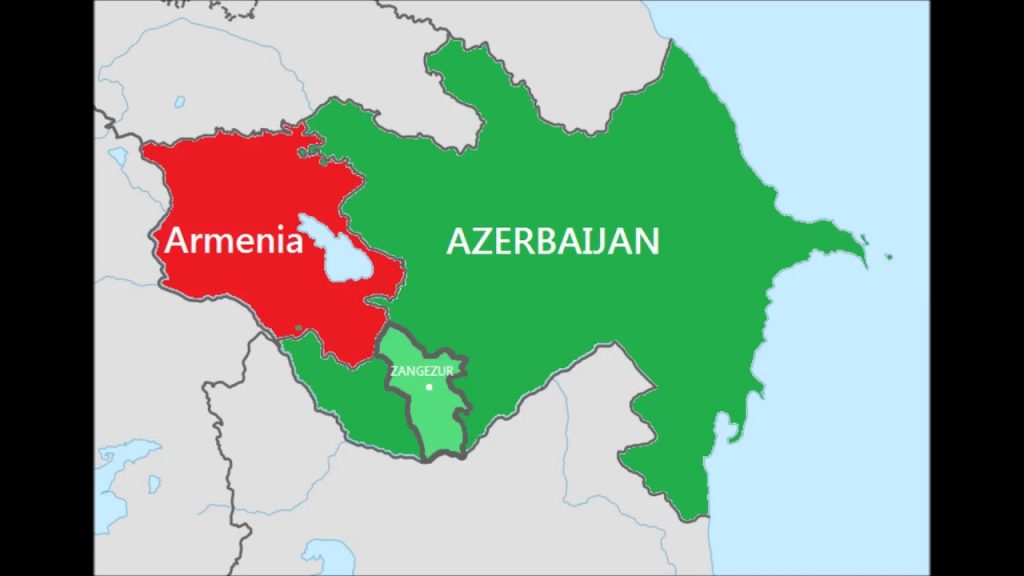 Turkey’s aspired expansion into the Caspian Sea is to the concern of its neighbor Iran. When Turkey and Azerbaijan conducted naval training together in the Caspian Sea in September of 2021, Russia’s ally Iran protested such an operation as illegal. Iranian Foreign Ministry spokesman Said Khatibzadeh said: “According to the Convention on the Legal Status of the Caspian Sea, with the exception of its five littoral states, in line with a prohibition, no foreign state should have armed forces here. Turkey’s military Caspian Sea presence is illegal.”

Russia is being diplomatic with Turkey while at the same making steps to contain it. Hence why Russia brokered the peace deal between Armenia and Azerbaijan, as opposed to Turkey being the sole string puller in the conflict. By doing so, Russia maintains its sphere of influence and its geopolitical leverage, as is evidenced by the fact that two thousand Russian troops have been deployed to Nagorno-Karabakh. Its the same reason why Turkey agreed with Russia to have a ceasefire with the Syrian government; yes, Turkey had to agree to stop fighting the Assad regime, but the ceasefire allowed for Turkey to maintain a troop presence within the Idlib province, and thus keeping a foothold in Syria. Turkey is not Russia’s friend, but it respects Russia enough to know not to start a full out war — at least for now or until Turkey has enough allies to back it in a conflict with Moscow. Both Russia and Turkey are maintaining diplomatic ties while pursuing their own separate interests of empire and power. As Stephan Piligian points out: “Relative to the relationship of Turkey and Russia, we should not confuse trust with political expediency. It is a game of self-interest, and Armenia is one of the pawns.”

Think of it like the Soviet Union and Nazi Germany. Yes, they both were in cahoots in their invasion of Poland, but they both had their own interests of domination — and in the end, they turned on each other, like two dogs fighting for the same bone. Russia and Turkey are cooperating, for now. And there have already been signs that their friendship is a facade that is about to break into war, like a frozen river cracking as it faces the beams of the sun at the beginning of spring. In 2015, Turkish F-17s shot down a Russian Su-24. In February of 2020 both the Syrian and Russian air forces struck and killed dozens of Turkish soldiers (the most recognized death count is 33, but Turkish sources put it between 50 to 100). Such a serious slaughter of troops cannot be done without the sentiments of war, and Turkey is not just going to continue friendship with Russia when it is obvious that the two are enemies.

But until a war finally erupts, Russia and Turkey will continue to play the game of diplomacy while trying to maintain and expand their sphere of power and influence and prevent the other from doing so. Hence why Russia wants to make sure that countries outside the Caspian Sea realm can’t have a naval presence in that body of water. But, Turkey is pulling in another country into its sphere of influence and that is Pakistan. According to New Eastern Europe: “Ankara and Baku also came together to shape a nucleus for tripartite configurations with countries in different parts of the globe – Pakistan being an essential one to build a solid international base for supporting Azerbaijan’s cause on the Karabakh issue.” Perhaps the reason as to why Russia wants to block outside countries from the Caspian Sea is because it knows that Turkey wants to rush in allies that would interrupt Russia’s sphere of influence. Just recently, Turkey, Pakistan and Azerbaijan conducted the “Three Brothers 2021” water training exercise in Baku (right on the Caspian Sea), as we read from the Azeri Ministry of Defense:

The “Three Brothers – 2021” international exercises held with the servicemen of Special Forces of Azerbaijan, Turkey, and Pakistan are underway.

The Special Forces Units successfully accomplished the tasks of infiltration behind imaginary enemy lines by land, sea air, as well as an ambush, invasion, amphibious, and airborne training in addition to the beneficial exchange of experience in the next stage of the exercises.

Iran (which borders with Pakistan) expressed its anger about the joint training project between Turkey, Azerbaijan and Pakistan. The Iranian supreme leader’s representative in the Ardabil province, Seyyed Hassan Ameli, warned Azerbaijan not to “play with the lion’s tail”. Azerbaijan is a close ally to Israel (which Iran is vehemently against, to say the least) and the two countries are currently in talks over a $2 billion weapons transfer to Azerbaijan. Azerbaijan also welcomed Tel Aviv’s involvement in the reconstruction of territories in Nagorno-Karabakh along its borders with Iran. Iran sees the recent Azeri reconquest of Nagorno-Karabakh as the presence of a “Zionist regime” on its borders. Although such sentiments may change in the future. Lets not forget that Iran and Azerbaijan are both Shiite nations and they may unite in the future for the same Islamic cause. Iranian politician, Mahmoud Abbaszadeh Meshkini, recently stated that Iran and Azerbaijan are both strongly related ethnically, culturally and religiously, and that any tensions “will only benefit foreigners, especially the Zionist regime.” The same thing can be said about Turkey and Iran. While both of these countries have tensions, they may just unite in the future. Both are against Saudi Arabia and Israel, and both share in their reverence for Shiite saints.

Relevant to this subject is the fact that Pakistan and Iran are not friends, but rivals, which is reflected by the alliance that Iran has with India against Pakistan. It makes sense given the fact that Pakistan is a major ally to Saudi Arabia which Iran — the strongest of the Shiite countries — wants to obliterate from the face of the earth. Pakistan is also Saudi Arabia’s strongest Islamic ally. Thus, by collaborating with Pakistan, Turkey is pulling it away from Saudi Arabia’s sphere and closer to the Turkish sphere.

The danger that Pakistan poses to Armenia is underlined by the fact that Pakistan is the only country on earth that does not recognize Armenia as a state. Turkey wanted to completely destroy Armenia (and still does), and Pakistan does not even acknowledge that Armenia exists. This is like Iran not recognizing the legitimacy of the state of Israel. To not recognize the legitimacy of a state is declaring your desire for those people not to exist. Pakistan, essentially, shares with Turkey’s animosity towards the Armenian nation. In the midst of all of this, Armenian troops have been redeployed back into Nagorno-Karabakh to join Russian peacekeepers. Moreover, Azerbaijani and Turkish underwater offence and defence troops recently underwent joint training exercises in the Azerbaijani sector of the Caspian Sea. With Armenian and Russian troops together in Nagorno-Karabakh; Turkey, Pakistan and Azerbaijan joining together against Armenia, and with Turkey and Azerbaijan on the Caspian Sea — which the Russians want to control — what we are seeing is a storm for war that is brewing. At the end of it all, the ones who will suffer the most will be the Armenians.