You are here: Home › Major Catholic Leader Molests Boy While Saying His Prayers. Now He Just Got Criminally Prosecuted By The US Government 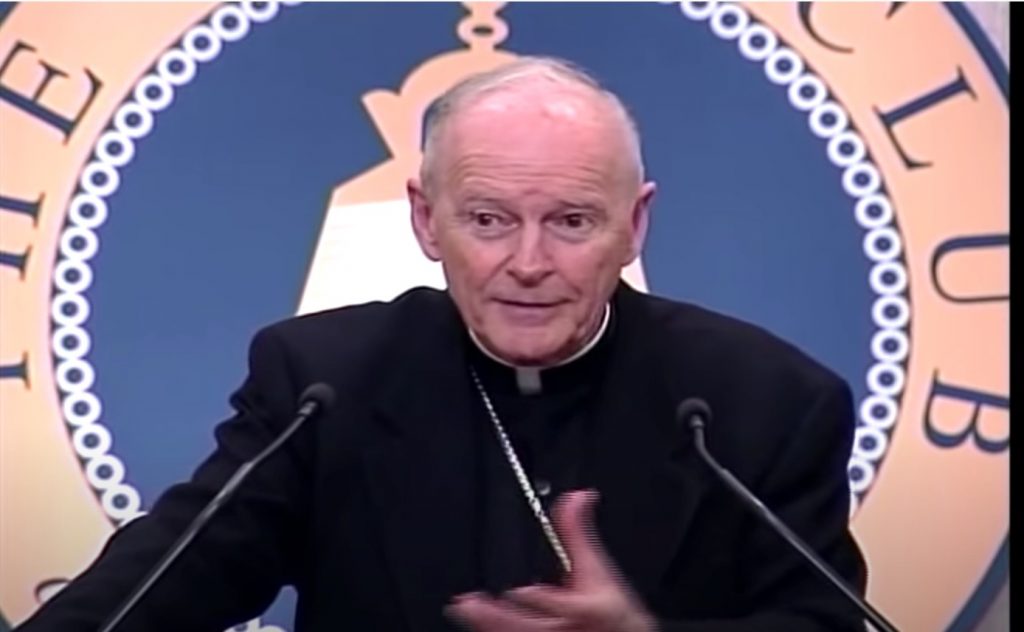 A former major leader in the Catholic Church, Theodore McCarrick, molested a boy while saying prayers. Now he just got criminally prosecuted, as we read in Reuters:

Former Roman Catholic Cardinal Theodore McCarrick has been charged with molesting a 16-year-old boy during a 1974 wedding reception, becoming the highest-ranking U.S. Catholic official to be criminally prosecuted for sexually abusing a minor.
Documents filed in state court in Dedham, Massachusetts, on Wednesday show McCarrick, 91, faces three counts of indecent assault and battery on a person 14 years or older.
McCarrick, an influential leader in the American Church for years, was expelled from the priesthood in 2019 after a Vatican investigation found him guilty of molesting both minors and adults.
A lengthy Vatican report released in November 2020 found that McCarrick had risen through the church’s ranks despite persistent rumors of sexual misconduct. In 2000 Pope John Paul II appointed him the archbishop of Washington, D.C.
McCarrick’s attorney, Barry Coburn, told Reuters: “We look forward to addressing the case in the courtroom.” McCarrick has previously said he has no recollection of committing child abuse.
The alleged victim’s lawyer, Mitchell Garabedian, who represents many church sexual abuse victims, said McCarrick was the first U.S. cardinal to be charged with a sexual crime against a minor.
“It takes an enormous amount of courage for a sexual abuse victim to report having been sexually abused to investigators and proceed through the criminal process,” he wrote in an email.
McCarrick already faces several civil lawsuits from men who have accused him of sexual abuse decades ago, but the statute of limitations in those cases has expired, preventing criminal charges.
However, the statute of limitations in the Massachusetts case was frozen when McCarrick left the state because he was not a state resident, according to the Boston Globe, which first reported the charges.
The alleged victim told investigators that McCarrick, a family friend, began molesting him when he was a boy, according to a police report filed in court. The abuse took place in several states, including New York, California and New Jersey, the report said.
The man told police that during his brother’s wedding reception on June 8, 1974, at Wellesley College in Massachusetts, McCarrick told him his father wanted the two of them to have talk about his misbehavior.
McCarrick groped him as they walked around campus before taking him into a small closet-like room and fondling him while saying prayers, the man told authorities.

Now, nothing in this story is surprising (disturbing, yes, but not shocking).

Pope Francis just praised the pro-homosexual work of heretical priest, Fr. James Martin, who teaches that gay sex is accepted by God. As we read in America Magazine:

Pope Francis has again encouraged the ministry of James Martin, S.J., to L.G.B.T. persons, and with words that could also encourage others in this work. He did so on the eve of the Outreach 2021 L.G.B.T. Catholic ministry conference that took place by webinar this Saturday, June 26, of which the Jesuit priest was the main organizer.

Some weeks ago, Father Martin, an editor at large at America Media, had informed the pope about the conference in a private mail and explained its purpose and then received a handwritten personal letter in Spanish from Francis, dated June 21, expressing his encouragement and support for this work.

His letter on the eve of Saturday’s outreach conference can be understood in this same light. Addressing him as “Querido Hermano” (“Dear brother”), Francis commends Father Martin for all this work, saying, “I want to thank you for your pastoral zeal and your ability to be close to people, with that closeness that Jesus had, and which reflects the closeness of God.”

Fr. James Martin believes and teaches that sodomite sex is accepted by God. For example, Martin speaks of his sodomite friend, Mark, and his “husband”, stating:

I continually come back to my friend Mark and his husband. And I continually say, and maybe this is a failure of mine to imagine someone else, maybe it’s arrogant. But I have a hard time imagining how even the most traditionalist, homophobic, close-minded Catholic cannot look at my friend and say, “That is a loving act. And that is a form of love that I don’t understand, but that I have to reverence.” And maybe that’s why it’s hard for me to respond to some of these critics because I don’t understand that. That is maybe a failure in my imagination to understand how people cannot see that.

James Martin’s entire message is that the Church needs to accept Sodom. And here we have the Pope himself praising this work of Sodom.

The Origin Of Ashura: Pre-Islamic Iran
Covid Is Not Going Anywhere And Its Slowly Killing Globalization
Follow