You are here: Home › Mass Grave Discovered In Ukraine Full Of Hundreds Of Bodies

By Shoebat on September 18, 2022 in Featured, General, Highlight 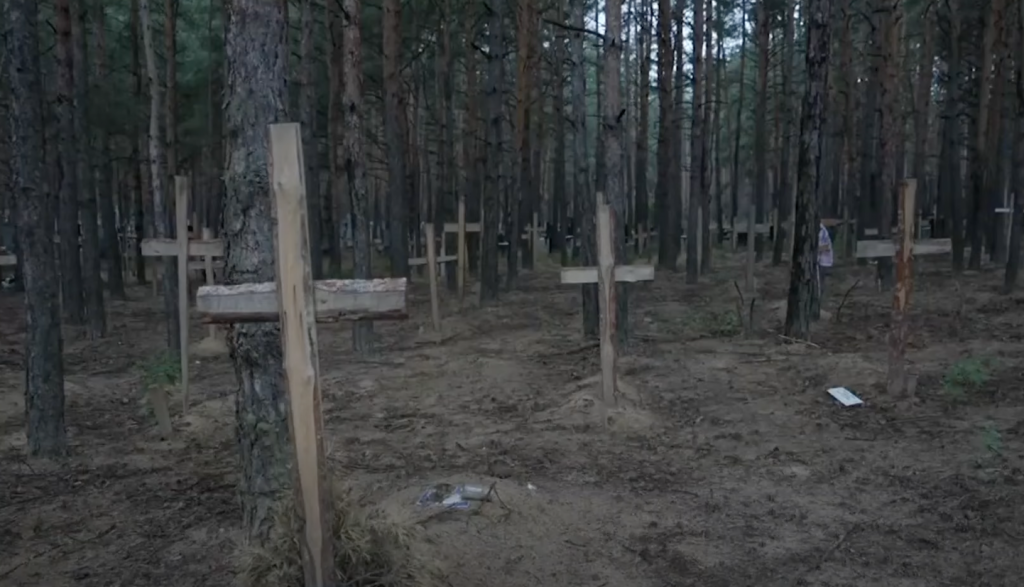 A mass grave was discovered in Ukraine full of hundreds of bodies. As we read in DW:

It’s only when walking along the forest’s path that the extent of the horror becomes clear. Each of the little dunes is a dug-out grave: methodically emptied rectangles of various sizes, where until only a few hours earlier human remains had been buried.

This is a site of sheer horror, of a mass burial of over 400 people who died violent deaths under Russian occupation in eastern Ukraine. Dozens of bodies have already been uncovered and moved to a makeshift morgue for further examination. But preliminary conclusions are grim: Most of the corpses show signs of torture.

Forensics have enlisted the help of firefighters to recover the human remains. “My task is to dig out the bodies, before forensics can establish what happen to them,” one of them, Andreiy Vladimirovich Sergienko, told DW. “We then place the bodies in bags and transport them in a morgue. I feel horrible. This is a horrible moment in my life, and the first such experience in all of my five years of service.”

“Psychologically, I think we will need some help in the future,” he added. “Because in any case it will be imprinted on our psyche forever. There are no names on the graves, no names, only numbers. 418. 418 people buried, can you imagine?”

All around Andreiy, fresh graves are unearthed in the loose soil. When a body is successfully extracted, diggers and forensic workers take a moment to stand in silence as a mark of respect for the dead. In a surreal scene, due to the number of corpses being uncovered, several forensic experts give their conclusions at the same time, which are written down by police officers. This grim litany echoes through the forest. The only other sound comes from the flies that fester on the bodies, from the clicks of the cameras, and from artillery fire, as the war rages on only a few hundred meters away.

In front of a small group of journalists, an official dressed in white protective gear crouches over a body that has just been recovered. He unfastens its clothes, looking for anything in the pockets that could facilitate its identification.

He then proceeds to slowly enumerate his preliminary conclusions: “The body is that of a male, in his eighties. His hands are tied in the back, his head covered with a jacket. His testicles are crushed, his inner thighs bear traces of torture. He received a violent blow on the head, from behind, probably with a sharp object, like a knife.” More gruesome details emerge, then the expert takes off his gloves and sits on the truck of a collapsed tree, refusing to comment on the gruesome discovery any further.