You are here: Home › Australian Christian Warrior Has Just Been Martyred Fighting For The Defense Of Christians. But There Are A Multitude Of Westerners Who Are Now Joining Christian Fighters And Are Here To Destroy ISIS

ISIS has just twittered a photo of an unknown Crusader fighter who was martyred in Tel Hamis in the southern countryside of Qamishli, in northeastern Syria while defending the Assyrian Christians. His name is unknown, he goes by the nickname “Bagok” and is 28 years old. He is truly a soldier for Christ. ISIS released he was Australian. The Mid East news outlet, Al Nahar, and Al-Arabiya also confirmed that he was Australian.

The caption says “Another photo of the Australian pig who was killed east of Tal Hamis” mocking that he was a dog lover.

It has become common that many are joining the ranks of their Assyrian Christian brethren and also working with Kurds in order to defend Christendom.

He calls himself a “Soldier of Christ,” and he’s back in Iraq battling ISIS on the front lines.

The man, identified only as Brett, is a 28-year-old U.S. Army Iraq war veteran. For the safety of his family, he’s requested that his last name remain unknown.

Brett returned to Iraq six months ago to join a Christian militia fighting ISIS. He’s involved in a battle near Mosul.

“I may not know them before, but they’re my people — the Assyrian Christians of this world — they’re indigenous to this part of the world,” Brett said. “People are hell-bent on erasing them in the history.”

Brett said he has a price on his head but says it’s in God’s hands and God’s will. He believes God has equipped him with many tools to fight ISIS.

He is 28 years old. Detroit born and bred. An Army veteran. And now he is a self-described “Soldier of Christ” back in Iraq, fighting ISIS on the front lines.

“People ask me, ‘Why you?’ I come back and I say, ‘Why not? Why just me? Where’s everyone else at?” said Brett, who requested that ABC News not use his last name to protect his family back home.

Brett returned to Iraq six months ago. In 2006-07, he served in the infamous “Triangle of Death,” where he said he was badly wounded in an IED attack on his Humvee.

He came here, he told ABC News, to defend the defenseless — to protect the Christians and others in this part of Iraq who have been terrorized by the ISIS onslaught: driven from their homes, massacred, their women and girls raped and sold into slavery.

He is of Irish and Polish descent, raised Roman Catholic and now describes himself simply as a Christian.

Brett fights alongside a small, local Christian militia — the Dweikh Nawsha. They are under the command of Kurdish peshmerga forces in this part of Iraq.

From Brett’s forward position, in the deserted Christian village of Bakufa, about eight miles from the outskirts of the city of Mosul in northern Iraq, you can see the black flags of ISIS whipping against the sky in a stiff winter wind.

We joined him there to hear his story. 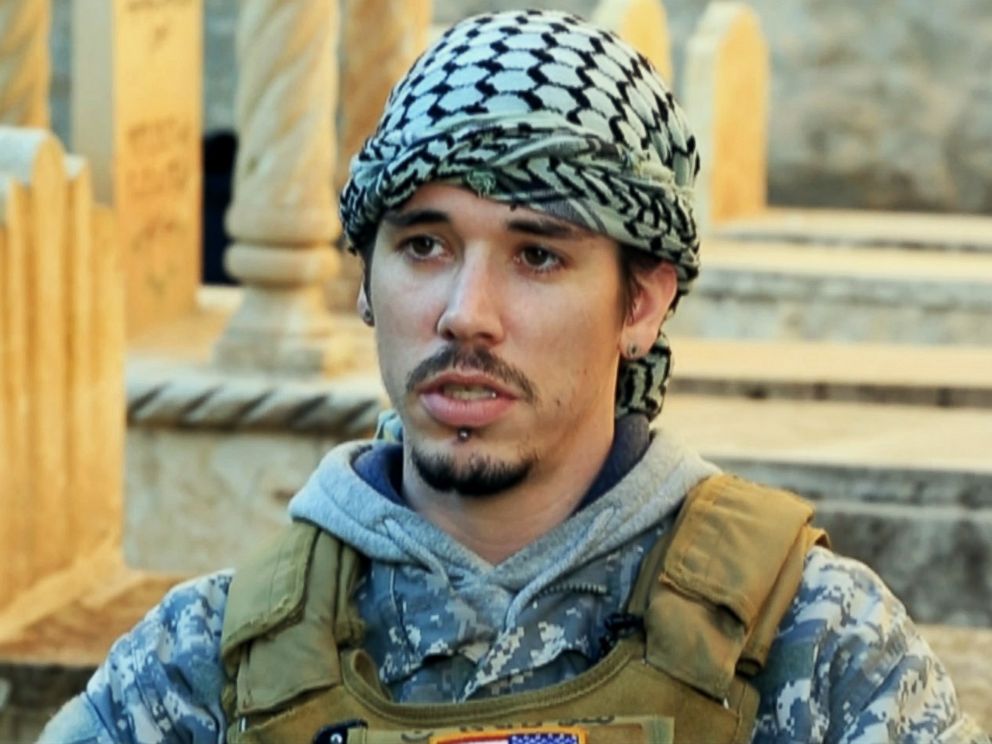 PHOTO: Army veteran Brett, 28, who requested that ABC News not use his last name to protect his family back home, has been fighting against ISIS in Iraq.

Another Crusader, Matthew Kawolski was serving with the group of foreigners Called Lions of Rojava in the city of Sinjar near the border with Syrian Kurdistan. Kawolski, along with a number of Americans and other Westerners have joined with the Kurds to fight the advance of ISIS. Kawolski is part of a unit called the Chappies within the Syria-based People’s Protection Units (YPG).

Matthew Kawolski was fighting alongside the Chappies–a unit of Westerners within the Syria-based People’s Protection Units (YPG)–when he was wounded in combat. He is now recovering from his injuries, according to a February 9 post on a Facebook page for the foreign fighters group the Lions of Rojava.

‘His brothers are standing by him during his recovery and he will be returning to the city upon his recovery.’

The nature or extent of Kawolski’s injuries hasn’t been indicated. It does, however, reveal a good deed the Florida man did upon his return to Sinjar.

‘He purchased and delivered a soccer ball to the Yezidi children in the UN refugee camp to display his care and concern for them. His service has been selfless and brave. Stay Chappy my friend,’ reads the post.

Pictured alongside Kowalski on the Lions of Rojava page is another American, one who made headlines when he left his country to serve in the fight against ISIS. Jordan Matson, a 28-year-old food packaging worker from Sturtevant, Wisconsin, is a former U.S. Army soldier. He has been fighting with the Kurdish People’s Protection Units (YPG) since last September.

After starting his adventure in Syria, the committed Christian is now in Iraq, where he fights against the jihadis of Islamic State wearing a vest inscribed with the words ‘Christ is Lord’. Mr Matson told the Associated Press”

‘I decided that if my government wasn’t going to do anything to help this country, especially Kurdish people who stood by us for 10 years and helped us out while we were in this country, then I was going to do something. I’m not going back until the fight is finished and ISIS is crippled.’

Mr Matson and dozens of other Westerners now fight with the Kurds, spurred on by Kurdish social media campaigners and a sense of duty many feel after Iraq, the target of a decade-long U.S.-led military campaign, collapsed under an Islamic State group offensive within days last summer. And while U.S. and its allies bomb the terrorists from the air, Kurds say they hope more Westerners will join them on the ground to fight.

When Christ was on the Cross, what looked like an execution to earthly eyes was a holy war to spiritual eyes. St. John said: “He who says he abides in Him ought himself also to walk just as He walked.” (1 John 2:6) To emulate Christ — the highest of warriors — is to be a warrior. In the sacred combat of the Cross, we war against the devil and his demons, and in turn, partake in the fray against their mortal followers. Christ Himself did not refrain from warfare when He struggled and fought against evil men, and because He is the incarnation of Love, to participate in His Holy War is to partake in love. When the Christian warrior fights against the enemies of God he is doing so in the highest form of love, because he carries his cross for the sake of the well beings of his brethren, emulating Christ when He died for us, and thus does he enter the Cross of Christ. As St. John tells us, “By this we know love, because He laid down His life for us. And we also ought to lay down our lives for the brethren.” (1 John 3:16)

It is by self-sacrifice that one knows love, and so the warrior has within himself the knowledge of love, not in a way that it is intellectual, but in a mystical union with Christ. Notice what St. John says in another place, “He who loves his brother abides in the light” (1 John 2:10). This is not speaking of brothers by blood, but by spirit, the Christian brethren, and to love the brethren is to be willing to die for him in holy combat, and by this is one in the light, that is, unified with Christ, “the true Light which gives light to every man coming into the world.” (John 1:9)

The Emperor Constantine, who did not hesitate to enter battle against the pagans and lay down his life in combat to protect the Church, wrote of this union with the light of God: “By keeping the Divine faith, I am made a partaker of the light of truth–guided by the light of truth, I advance in the knowledge of the Divine faith.” The divine love, as being proven through the sacrifice of the self in warfare, was expressed by the knight Ramon Llull, when he wrote:

“And if you sacrifice your life upholding Chivalry in such a way that you can love, serve and profess in the most, for Chivalry resides in no other place as agreeably as in nobility of courage, and no man can love, honour or profess Chivalry more than he who gives his life for the honour and the Order of Chivalry.” (Ramon Llull, Chivalry, 2.17)

When the Christian fights for the protection of his brethren with the prospect of his own death, he drinks the chalice of Christ, and fulfills the greatest of all love: laying down his own life for his friends. As the monk Peter the Venerable addressed the crusaders who fought the Muslims: “For your brothers you have exposed your souls to life, your bodies to death; you have already shed blood never before shed, which in battles you daily offer to God to be shed if necessary. You are truly sharers in that lofty, special love of which the Savior said, ‘Greater love hath no man than this, that a man lay down his life for his friends [John 15:13].'” (Peter the Venerable to Everard of Les Barres, in Barter and Bate, Templars.)

He takes up the cup and drinks it, as Christ did in the Last Supper before His death, and thus by this emulation, he participates in Christ, in Whom “we live and move and have our being” (Acts 17:28). As the Latin Rule of 1129 reads, the knight “should remain in his profession so that he may be able to equal the wisest of the prophets in this this: ‘I will take the chalice of salvation’ [Psalm 116:13], i.e. death, meaning that by my death I will imitate the death of the Lord, since just as Christ laid down his life for me so I am prepared to lay down my life for my brothers.” (Latin Rule of 1129, 5, in Barber and Bate, Templars)

St. John also said, “But whoever has this world’s goods, and sees his brother in need, and shuts up his heart from him, how does the love of God abide in him?” (1 John 3:17) In the Crusades and in all of the holy wars of Christendom, Christian warriors took up their swords, and their crosses, to liberate the brethren who were being persecuted by pagans. Surely this was love, surely did these men of valor have within them the love of God, and surely did they abide in the Light of Christ. Both the crusader and the persecuted are martyrs, and when they are slain or are wounded, they are entering into a mystical union with Christ, coming into His Cross participating in His Passion, and obeying what St. Peter said: “rejoice to the extent that you partake of Christ’s sufferings, that when His glory is revealed, you may also be glad with exceeding joy.” (1 Peter 4:13)

The Military Of Chad Takes 207 Muslim Jihadists, And Butchers All Of Them To Death
U.S. Congressman Heckled at Temple Mount by Gaggle of Muslim Women Shouting ‘Allahu Akbar’ and Says He ‘Respects what they’re doing’
Follow