You are here: Home › Turkish Submarine Provoking War Against Russian Ship As Erdogan Promotes An Invasion Of Jerusalem Where Muslims Embrace Him As Savior

By Walid Shoebat on December 1, 2015 in Featured, General

A logistics ship belonging to the Russian navy has encountered a Turkish submarine passing through the Dardanelles toward the Marmara Sea, accompanied by a Turkish coast guard boat became a tense moment across the shores of Çanakkale’s Eceabat showing how close it is for a military confrontation between Russia and Turkey.

The 133-meter ship, the Yauda, arrived at the Dardanelles from the Aegean Sea at around 10 a.m. on Nov. 30. The Yauda reached the coast of Çanakkale in an hour and five minutes and traversed the strait by 1:15 p.m.

The crossing is also noteworthy due to its timing, as it came during a period in which Turkish-Russian relations have been strained due to Turkey’s downing of a Russian fighter jet due to its violation of Turkish airspace, as Turkey claims. 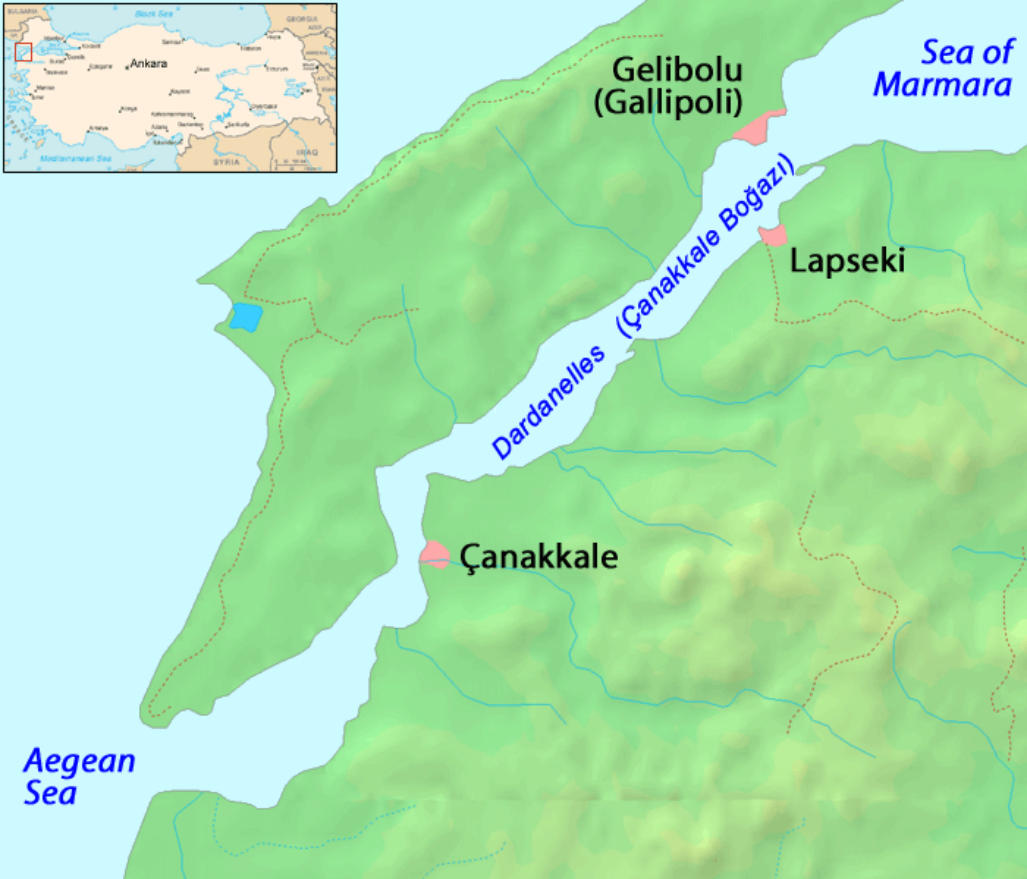 The Dardanelles. The video showing the tense moment between the Yauza and the Turkish sub was shot from the Turkish city of Canakkale.

If Ankara wants to retaliate against Russia for the raft of economic sanctions The Kremlin slapped on Turkey over the weekend, closing the Bosphorus Strait might be a better idea than attempting to do without Russian gas.

After all, Turkey gets more than half of its gas from Gazprom, and given Erdogan’s support for the various rebels battling for control of Syria, this might not be an opportune time for Ankara to try and negotiate with Iran for more supply.

Closing the Bosphorus however, would achieve two things. First, it would send a message to Moscow that not only will Ankara not apologize for inexplicably blowing a Russian Su-24 warplane out of the sky, Turkey will in fact escalate the situation further. Second, it would cut Russia off from a key supply route to Latakia. That’s not to say Moscow wouldn’t get there eventually, but Turkey could make things exceptionally inconvenient by blockading the strait.

Turkish submarines are no small issue. Turkish Naval Forces possess four Gür-class submarines, which are considered one of the best diesel-electric submarines in the world. Based on the German firm HDW’s export-oriented Type 209 T2/1400 models, the Gürs are armed with submarine-launched Harpoon anti-ship missiles (UGM-84), as well as the British-made Tigerfish and German-made DM2A4 heavy torpedoes. The Turkish submarines are also equipped with state-of-the-art detection and targeting systems, which turn these platforms into silent and deadly hunters that would threaten the Russian surface action group positioned in the eastern Mediterranean. Given the Syria-based Russian naval task force’s shortcomings in anti-submarine warfare (ASW), the Gür submarines give immense leverage to the Turkish side.

The place where this confrontation happened is significant both historically and prophetically. Erdogan of Turkey is telling the Christian world, that the waterways are his and that he also has his eye on Jerusalem. A video of Erdogan’s voice sharing an inspired dream he had entering the Temple Mount in Jerusalem. The video circulates the Muslim world depicting Erdoğan as “the conqueror of al-Aqsa Mosque (Temple Mount)” showing as he is a voice stemming from the heavens above:

It is as if the voice came from the heavens where Muslims in Jerusalem listen while gazing at the sky to hear Erdogan’s real voice coming from God himself:

A “river gushing under it,” sending “peace” and “Islam embracing me once more” says a lot that needs interpretation. The spirit speaking to Erdogan is giving him a multifaceted prophecy. He holds the “living waters that shall flow from Jerusalem …” (Zechariah 14:8). “The river” under Jerusalem “is mine” says Erdogan. This is an argument against Christ. This is the dragon who gushes forth a flood and it will stem from his dominion when he sets his palace in Jerusalem. (Revelation 11-12, Daniel 11:45)

In no way Erdogan made this up on his own. It was inspired to him from the underworld. He is speaking of his spirit. “Islam [in Jerusalem] will embrace me once more,” Erdogan believes that his spirit was in Jerusalem before. And as the re-incarnation of Muhammad he descends back to the Temple Mount again (as a second time) where the citizens of Jerusalem will see him and hear him descending as seen in the video. It is as if he was Muhammad himself who has been there in Al-Isra’ Wal-Mi’raj: Muhammad’s ascension to heaven and descent to Jerusalem which is holy to all Muslims.

It all links. In Erzincan, central Turkey, Erdogan said he is the cause of goodness: “descending from heaven over all Muslim nations”. Erdogan is referring to when Muhammad “ascended to heaven” claiming, as it says in Isaiah 14:13 regarding Antichrist: “I will ascend to heaven; above the stars of God”. Muhammad described his journey claiming to meet God who ordered him to rule over all of mankind, angels and the whole multitudes of demons.  Muhammad also claimed to be Khalifat-u-Allah (Vicar of Allah).

Erdogan wants not only to establish a presidential system where one man rules, as he is currently attempting to change the constitution, but such a presidential position becomes the Khalifat (Caliph).

Erdogan added: “When you mention the word ascension; the first thing that comes to mind is Jerusalem and Al-Aqsa Mosque”. And lest we think that such ascension to heaven (the fascination of Erdogan) is strictly Lucifer, the Bible shows that such manifestation is also regarding Antichrist as the Bible adds: “Is this the man who made the earth tremble?” (v. 16)

This angel has manifested in a man. Antichrist claims to have ascended to heaven: “you have said in your heart, I will ascend to heaven” (v. 13).

These days, prophecy is adding up day by day. The Temple Mount, the Dardanelles, confronting Russia, the Suez Canal in Egypt, and even a new canal Erdogan wants to carve involves demonic visions and dreams that Erdogan is personally experiencing and sharing with the Muslim world.

Where the submarine confronted the Russian ship is on Çanakkale (The Gallipoli Campaign) on the Dardanelles. There in 1915, during the First World War, British Empire and France attempted to capture the Ottoman capital of İstanbul and secure a sea route to Russia. The Royal Navy failed to force the Dardanelles and suffered severe losses. During a series of operations, HMS Triumph, HMS Ocean, HMS Goliath, HMS Irresistible and the French battleship Bouvet were all sunk. The French submarine Q84 Joule and the Australian submarine AE2 were also destroyed and several other important ships were crippled too.

In yesterdays incident, Erdogan reminds the world of Çanakkale (The Gallipoli Campaign):

Turkey’s control over water ways will become a major factor in the Battle of Armageddon where Turkey will confront Christian nations on use of rivers. All this brings us to learn more about Turkey’s emerging Sultan-Antichrist who is also called “Pharaoh King of Egypt” (Ezekiel 29:3), the “Assyrian” and “King of Babylon”. But one thing we know for sure, that all these are Gog “the chief prince of Meshech and Tubal” which every historian agrees: Meshech and Tubal are in Turkey, not Russia.

In Ezekiel 28 there can be no doubt that this is Satan, “great monster who lies in the midst of the rivers.” (Ezekiel 29:2) It is possible that “my river is mine” (v. 3) is concerning blocking the Christian west from the Strait of Tiran, but with this massive project, it could also be the Istanbul Canal or even the Dardanelles.

And if you think that rebuilding Babel was a crazy project, you need to contemplate on the “Kanal İstanbul,” Erdogan’s project, which is proposed to be built on the European side of Turkey, connecting the Black Sea to the Sea of Marmara dubbed “The Crazy Project”.

To understand the history behind this project, it stems from a historic dream that no man could do until Erdogan of Turkey showed up. How he succeeded where others failed gets to show the extent of Erdogan’s ability to convince. The first proposal to build the Istanbul Canal was made by Ottoman sultan Suleiman the Magnificent (reigned 1520–1568). Then came Sultan Mehmed IV, pressure for the recommencement of the canal was applied but to no avail. Then came Sultan Mustafa III (reigned 1757–1774) tried twice in 1760 but the project could not go ahead due to economic problems. Then during the reign of Sultan Mahmud II, an Imperial Ottoman Committee was established to examine the project once again. A report was prepared in 1813 but no concrete steps were taken.

Then came the savior of Turkey, Prime minister Recep Tayyip Erdoğan announced the Kanal İstanbul project on April 27, 2011 during a rally held in connection with the upcoming 2011 general elections, calling it as his Wild Project (Turkish: Çılgın Proje) which will be completed in 2023.

With this canal, Turkey will be able to pass aircraft carrier groups to the Black Sea without any international supervision even in times of peace. Military power is surely very important but the Istanbul Canal puts more power into the hands of Turkey through the energy axis and raises its position as an energy hub. The canal would also potentially have an undermining effect on the current pipeline projects of Russia, which would enable the West to have a genuine “sanctions card” to play against Russia.

Bleeding heart leftist sympathizers spend Thanksgiving near Guantanamo Bay prison feeling sorry for the terrorists
War Between Christendom And The Kingdom Of The Antichrist Is Coming, Christendom Will Become An Empire Again And Dominate The World And Crush The Kingdom Of Satan
Follow