You are here: Home › Turkey’s Muslim President Goes To Mecca Where Multitudes Give Him Allegiance While They Declare Worship For The Antichrist

By Walid Shoebat on February 3, 2016 in Featured, General

“Ya Allah” “Bismillah” “Allahu Akbar” the multitude at the Kaaba chanted in delight to see the Turkish Prime Minister Ahmet Davutoğlu. The unusual event captured attention throughout the Muslim world since it has rarely been seen, worshippers focusing on Davutoğlu during the Umra pilgrimage in the Kaaba instead of focusing on their holy observances which was found extremely unusual by many Muslims.

The Umrah is a pilgrimage to Mecca, Saudi Arabia, performed by Muslims that can be undertaken at any time of the year, in contrast to the Hajj. Erdogan and Davutoğlu as it seems have made it a habit to gain attention at the Kaaba. This incident has drawn strong reactions from the anti-Erdogan and anti-Davutoğlu secularists who have accused the president and the prime minister of turning Islam’s most sacred place into a political rally.

Davutoğlu, as Erdogan did, paid an official visit to the Saudi capital, Riyadh, over last weekend. Yet during his stay, and like Erdogan, he too also visited the Kaaba for a grand finale show. It was only last month that the Arabic media throughout published: “The Gates of The Kaaba, Opened Up For The Sake Of Erdogan”.

But this time, this “Bismillah” (in the name of Allah) the crowds chanted to Davutoğlu is the mark of Islam which has been used as the symbol of allegiance to Islam.

When I first discovered how this relates to Bible prophecy and announced it to the Christian world, it created controversy as well as agreement for obvious reasons:

Within all of this relatively new information concerning Islam and ‘the mark of the beast,’ this revelation fittingly came to us from none other than a former Muslim, who just so happened to notice the remarkable resemblance between the Arabic symbols of  “Bismillah”, he had seen many times before his conversion, alongside the Greek letters written down in the book of Revelation, by John.

I actually never made a big deal about my discovery and divulged what I discovered before I included it in my first book “Why I Left Jihad” for everyone’s perusal. I was neither dogmatic or was one hundred percent convinced myself that this is the absolute solution to the riddle that gripped interpreters for two millennia. Simply put, I concluded that the possibility to the interpretation was:

“The word count (from the Greek psephizo) in this verse may also be translated as reckon or decide. The word number (from the Greek arithmos) may also refer to a multitude (as in peoples or nations)” So, if we use contextual wording in the verse as translated from the original greek passage, the verse would read as follows: “Here is wisdom. Let him that hath understanding reckon the multitude of the beast: for it is the multitude of a man; and his multitude is in the name of Allah (Bismillah)”

Everywhere I went and gave hundreds of speeches, I tried to divert from the subject as I noticed, Americans kept nagging me about since they are fascinated with imagery and riddles. I tried my best to avoid the subject to insist that this is not the conclusive method, even though the three Greek letters were a spitting image of what Muslims used throughout the centuries and the chances of this being an accident were slim. I did not want to be known as the man who unlocked a two-thousand year old riddle and focused instead on discussing “the name of the beast” with the crowds who always questioned me about the topic. When it came to my detractors, I simply asked a simple question: “can you deny that the Greek symbols look like the Arabic Bismillah”? The answer was always “no”. “So what if these three greek letters got etched on Muslim arms and foreheads, will you then believe?” They said “no, because its Greek”.

One never wins even when, for some reason, that the Greek looks Arabic.

It was the second sense on how we interpreted scripture that fascinated me more. What does scripture mean when it says “the name of the beast”? This ‘mark’ had three flavors etched on the right arms or foreheads: “And that no man might buy or sell, but he that hath the character (mark), or the name of the beast, or the number of his name.” (Revelation 13:17) There we find “mark” “name” and “number”, three flavors and not one size “666” fits all. 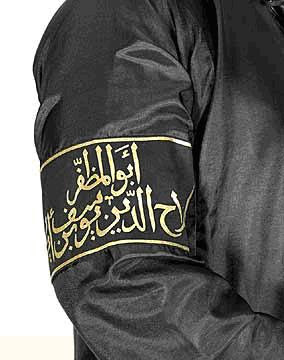 For example, in one sense, God created the heavens and the earth, where His spirit hovered over the water to create life, but then there comes the other sense, the spiritual sense of being “born again” of “water” and “spirit” by which one begins his baby life after the sacrament of baptism (water) and through the Holy Spirit Who gave us a new birth.

It is here where one begins the journey to eternal life, where the Christian never dies, even when the corruptible body perishes. The Christian, being absent of the body is to be present with the Lord in the Kingdom of Heaven.

But even when we are still alive on earth, we can still participate with the saints on Mount Zion. While one sense thinks that when we read of “Mount Zion,” we automatically think of “Jerusalem,” but then comes the other sense, a greater glory on how we approach this other Mount Zion in heaven through our daily prayers: “You have come to thousands upon thousands of angels in joyful assembly, to the church of the firstborn whose names are written in heaven. You have come to God the Judge of all, to the spirits of the righteous made perfect to Jesus the mediator of a new covenant …” (Hebrews 12:22-24)

The other sense, that is so missing, here we can approach “angels” and “saints” whose “names are written in heaven” in the book of life.

The saints in Hebrews 12 have their “Names written in heaven” while the followers of Antichrist are not: “The inhabitants of the earth whose names have not been written in the book of life from the creation of the world will be astonished when they see the beast, because he once was, then he was not, and yet came again,” (Revelation 17:8).

A name means everything. When Psalm 83:16 states, “That they may seek your name O Lord,” while some think in the one sense, this must be the literal name of Jesus, but from the other sense, He is Emanuel, which  means “God with us.” “His name shall be called wonderful, counselor, Mighty God, Everlasting Father, Prince of Peace.” No one accepts the names of the true God except the ones who believe in His attributes—that Messiah is “Almighty God” and the “God with us”. This signifies a holy creed that shuns the schismatics with there one sense of interpretation using half-baked truths and by this, they become an Antichrist with their name blotted out since it was never registered. Interpreting with the two senses, is an issue of eternal life or eternal damnation.

Then we have “blasphemous names”: “Then the angel carried me away in the Spirit into a desert. There I saw a woman sitting on a scarlet beast that was covered with blasphemous names and had seven heads and ten horns,” (Revelation 17:3).

Then we see here Davutoğlu going to the Kaaba, in the desert of Arabia, which is also considered in Islam as a “woman” and on her forehead are creeds of blasphemy etched with gold and silver, just as John prescribed it while here they cried out: “Bismillah” (in the name of Allah).

It is here were I laid my case showing how modern western Christians are daily being molded, made to think in one sense, to have a short attention span and are daily bamboozled by bombardments of anti-apostolic-succession nonsense. They use selective verses where if Christ said “I am the Way” as if “saints”  and “angels” do not connect to The Way which was clearly prescribed in Hebrews 12.

The modern westerner can easily comprehend a giant electric dynamo which trillions of sockets in millions of homes connects to, where every light bulb connects and lights up at a flick of a button. But when it comes to God, they imagine His glorious Mount Zion as if it was a flashlight with only one battery and one button to click, light up, and lead the way, since Jesus said “I am the Way”. They forget that the patterns of the Temple and Mount Zion on earth were a pattern of what is in heaven.

Many are taught spiritually to live like an ant which daily comes out of a crack in a wall searching of a crumb. The ant then crawls back in its comfort zone. If the ant only knew, that the crack is part of a wall in a building; a building of many buildings in a block; a block of hundreds of other blocks in a city; a city out of thousands of other cities in a nation of a hundred or so other nations of a universe from a multitude of other universes and galaxies… it is only then, when the ant sees all this, will this ant come out of its crack, to see God’s heavenly Jerusalem and then to approach it in awe and wonder.

Donald Trump Wants To Partner With Putin To “Beat The Crap Out of ISIS”
Muslims Take Twenty People And Burn Them All Alive, They Attack Sixty-Five Other People And Butcher Them All
Follow