You are here: Home › The Demons Of Lebanon’s Civil War Are Returning As Lebanese Right-wing Rage Against Syrian Refugees 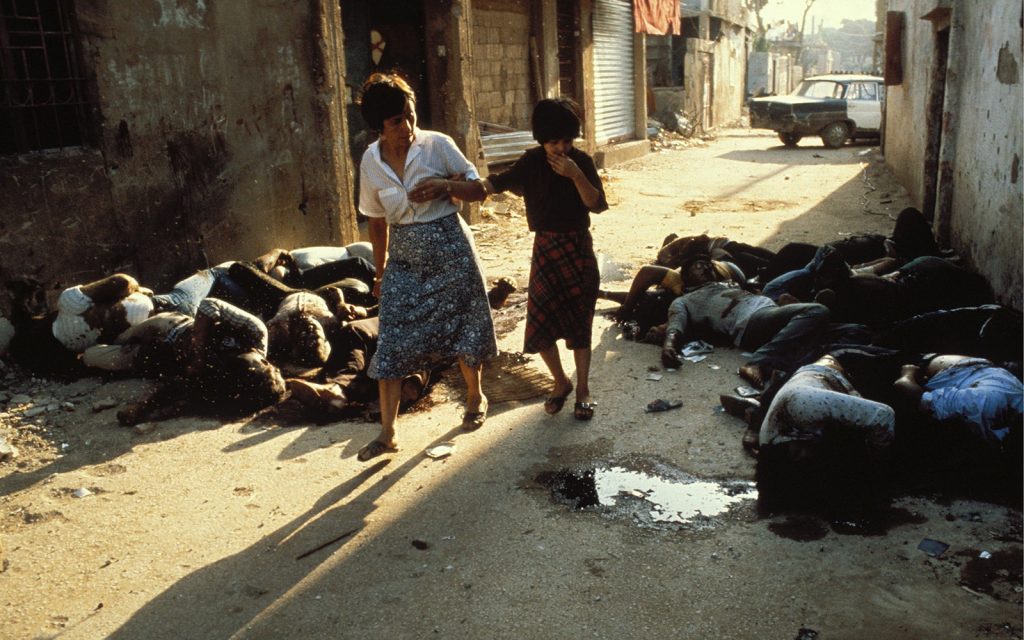 LEBANON – SEPTEMBER 21: The massacre of Palestinians in Sabra and Shatilah in Beirut, Lebanon on September 21, 1982 – Surviving families returned to the refugee camps of Sabra and Shatila near Beirut to assess the extent of the massacre of 300 to 1500 Palestinians by Christian militiamen . The killong took place while the Israeli army was stationed around the Palestinian refugee camps. (Photo by Alain MINGAM/Gamma-Rapho via Getty Images)

Lebanon is a country filled with strife, and there are no sides that are good, with neighbors hating one another, and with factions covering their own intentions with the face of justice. Rebellion is masqueraded as justice, and the true nightmare is exposed only after everyone is sold to the facade of righteous indignation.

Neighbor is going against neighbor, with Lebanese hating Syrian. There is an immense hatred towards Syrian refugees, especially now that many Syrians are voting for Bashar al-Assad within Lebanon. Mobs of Right-wing Lebanese attacked buses carrying Syrian expats and Syrians heading towards the Syrian embassy in Beirut.

These mobs consisted mainly of members of the Right-wing Lebanese Forces, a political party (that was once a militia) of Maronite Catholics whose religion is more of a national identity than a spirituality. The mobs waited for the cars and buses of Syrians at several intersections in Beirut, outside the city and in the eastern Bekaa region. They attacked the vehicles with rocks and smashed the windows with sticks. In one situation near Nahr el-Kalb, on the highway north of Beirut, one person attacked a driver by poking him with a wooden stick while others smashed his windshield. The buses had photos of al-Assad which only agitated the mobs. Fadi Nader, one of those in the mob, expressed his rage: “They don’t need to carry pictures and flags for an absurd criminal regime … If they want to vote, they can go home and vote there… Since they love Bashar Assad, why don’t they go home?“

The Assad regime is extremely hated in Lebanon, and this stems from a resentment rooted in the Lebanese Civil War when Bashar al-Assad’s father, Hafez al-Assad, invaded Lebanon. The Syrian military did not fully withdraw from Lebanon until 2005, when Bashar al-Assad had already been ruling.  As Syrians made their way into the embassy in Baabda, they cried out  “God! Syria! Bashar!” and “We’d sacrifice ourselves for you, soul and blood, Bashar”, an indication of the tribal divisions being revealed within Lebanon. The Syrians continuously showing their support for Assad will only exasperate the hatred that Right-wing Lebanese forces have towards them. But yet again, we cannot blame Syrians for supporting Assad; he is, after all, fighting the terrorists who ruined their country, and more power to Assad means countering the forces of chaos and bringing more stability to the country that they left due to NATO’s support for rebels who seek to overthrow Assad. On Syrian woman who had left her hometown of Raqqa in 2015, said to Al Jazeera:  “We want al-Assad, and God wants him too … We lived in stability under his excellency”.

Tension with refugees is one of the things that accelerated the Lebanese Civil War which sparked in the 1970s. Lebanon is still a heavily divided country, being broken up between the Christians, Sunnis, Shiites and Druze, and animosity towards Syria is still harbored by the country’s Maronite faction. The country is still ripe for civil war. In the words of Hicham Safieddine: “Social conflict is at an all-time high, and regional wars and geopolitical tensions are simmering.” Just as conflict between Lebanese Christians and Palestinians erupted in the Lebanese Civil War, so could the tensions between the Right-wing Forces and Syrians explode into another ethnic conflict.

If a civil war does break out again, Iranian proxy Hezbollah will most definitely participate in order to establish its own power, being currently the most armed of the political factions. The Lebanese military will have difficulty dealing with the situation since it’s ranks will fragment, with Shiites, Sunnis and so-called Christians dissenting to fight for their own sides. Just to give you an idea as to how bloody Lebanon’s past civil war was, here are some examples of the horrors that took place in that conflict. In 1978, Right-wing Catholic claiming Maronite thugs forced an entire group of Shiite men, women and children into a mosque in the village of Khiam, and shot all of them to their deaths. This took place under the superintendence of Israeli soldiers. Etienne Saqr, a Maronite militia leader who went by the name Abu Arz — the “Father of the Cedars” — had a penchant for cruelty and enjoyed tying Palestinian prisoners to the backs of taxis and dragging them for twelve miles before tossing their corpses into a dried riverbed. “If you feel compassion for the Palestinian women and children,” he once said, “remember they are communists and will bear new communists.” In one of the events leading up to the full breakout of the war, in 1975 four Christians were found shot dead in a car outside the electricity company headquarters in east Beirut. According to Maronite officers of the Right-wing Phalange paramilitary at the time, their leader, Bashir Gemayel, ordered his men to slaughter forty Muslims. His officers set up roadblocks and the first forty Muslim men they found, they took and slit their throats.

Muslim militias followed the same example, setting up their own roadblocks and butchering the Christians they found. These killings took place for hours, being conducted by both Christian and Muslim forces, and hundreds were butchered. In 1976, the Phalange and their allies — the Chamounists — took over the slum of Karantina (which was populated by Palestinians, Syrians, Kurds and Armenians) and butchered 1500 people, mainly Muslims. The Palestinians responded by hitting the Christian village of Damour. Camille Chamoun led the defense of the village before escaping on a helicopter and the PLO massacred almost the entire population. The Phalangists and other Maronite factions laid siege on Tel al-Zaatar, a refugee camp controlled by the PLO. The Phalangists blocked water from entering the camp by shooting those who tried to bring water inside. Numerous Palestinians were injured trying to transport water into the camp and around three thousand people died from dehydration. An agreement was eventually reached and it specified that civilians in the camp would leave Tel al-Zaatar with the assistance of the Red Cross. As the civilians were leaving, the Maronite fighters ambushed them and thousands were butchered.

Out of all the massacres that took place within the Lebanese Civil War, the most horrific was what took place in the refugee camps of Sabra and Chatila. There were bodies everywhere, and the smell of rotting corpses filled the air. As was written on the innumerable corpses by Robert Fisk, who was present in the camps right in the aftermath of the massacre: “They were everywhere, in the road, in laneways, in back yards and broken rooms, beneath crumpled masonry and across the top of garbage tips. … Each corridor through the rubble produced more bodies. The patients at a Palestinian hospital had disappeared after gunmen ordered the doctors to leave. Everywhere, we found signs of hastily dug mass graves. … All of us wanted to vomit. We were breathing death.” (Fisk, Pity the Nation, ch. 11, p. 360, ellipses mine). He goes on to describe: “We might have accepted evidence of a few murders; even dozens of bodies, killed in the heat of combat. But there were woman lying in houses with their skirts torn up to their wastes and their legs wide apart, children with their throats cut, rows of young men shot in the back after being lined up at an execution wall. There were babies — blackened babies because they had been slaughtered more then 24 hours earlier and their small bodies were already in a state of decomposition — tossed into rubbish heaps alongside discarded US army ration tins, Israeli army medical equipment and empty bottles of whisky.” (Ibid, pp. 360-1). Thousands were killed. Such was the war, and such is the horror that would occur again if civil war were to ever break out in that country.