You are here: Home › Azerbaijan Takes The Lachin Corridor

By Shoebat on August 27, 2022 in Featured, General, Highlight

The Lachin Corridor, which links the much fought over Nagorno-Karabakh with Armenia, was just given over to Azeri control, in accordance with a Russian brokered peace deal back in 2020 at the conclusion of the war. Part of the agreement was that Azerbaijan would a construct an alternative road alongside the Lachin Corridor in the next three years so that Armenians living in Nagorno-Karabakh could travel to and from Armenia. The road was finished earlier than expected, and so Azeri forces are now occupying the city of Lachin alongside two adjacent towns, Aghavno (Zabuh) and Sus. Russian peacekeepers will be present at the new road to keep security. Azerbaijani President Ilham Aliyev praised the taking of Lachin, stating:

Since Azerbaijan is a proxy for Turkey, the taking of Lachin is a victory for Ankara. Regardless of any talks of peace, tensions is still very strong. Just weeks before Azerbaijan took Lachin, violence between Azeri and Armenian soldiers left three people dead, and Turkey gave a warning to Armenia. As we read in Radio Free Europe:

Turkish Foreign Minister Mevlut Cavusoglu has called on Armenia to “refrain from new provocations” several days after Yerevan and Baku traded accusations over an escalation of violence in Nagorno-Karabakh that left at least three people dead.

Speaking at a gathering of Turkish diplomats in Ankara on August 8, Cavusoglu reiterated his country’s vision of peace in the South Caucasus region.

“Since the end of the war, Turkey continues to make efforts to ensure peace in the region,” Cavusoglu said, alluding to the deadly six-week war between Azerbaijan and Armenia over Nagorno-Karabakh and surrounding areas that ended with a Moscow-brokered cease-fire in November 2020.

Despite what appears to be a deescalation of conflict in keeping with calls by Russia, the United States, and the European Union, the situation in and around Nagorno-Karabakh remains relatively tense as Armenians and Azerbaijanis continue to accuse each other of regular cease-fire violations.

Armenia said one of its soldiers was wounded along the border with Azerbaijan on August 6, a claim denied by Azerbaijan but confirmed by the Russian Defense Ministry in its latest news bulletin on the Nagorno-Karabakh peacekeeping operation. 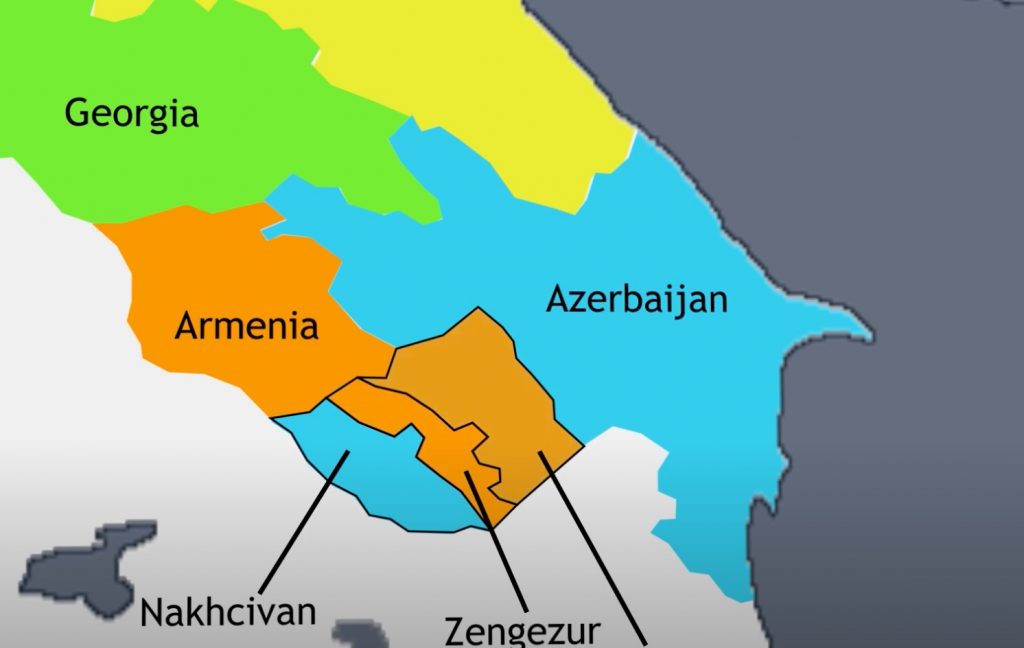 In the spring of 2022 leaders from Armenia and Azerbaijan held peace talks in Brussels which were superintended by the EU Council president. Regardless of all these talks, there is still violence. The future of the two South Caucasus countries is dismal. At the end of the day, the war will resume and this will be a proxy war between Russia and Turkey. The Lachin Corridor was the lifeline for the Armenians in Nagorno-Karabakh, as it was their access way into Armenia. Now the Armenians will have to depend on a new road controlled by Azerbaijan, which means that the Azeris can cut off the Armenians of Nagorno-Karabakh from Armenia, making it impossible for the Armenians to escape to Armenia in case another conflict breaks out. The next major advance for Azerbaijan would be the opening of the Zangazur Corridor, which would link the Azeri enclave of Nakhichevan with mainland Azerbaijan. It would start from Nakhichevan, run through Armenia, and link with Azerbaijan. America and the EU support the opening access routes through the corridor. But the country that really wants this corridor is Turkey, since it would give the country direct access to Azerbaijan and to the Caspian Sea. And since Azerbaijan is an extension of Turkey (Azeris see themselves as being of one nation with Turkey while having different governments), this is an advance for Ankara. Another scary thought for Armenians is that this corridor would give Turkey free access on a road that runs through Armenia.