You are here: Home › Featured › General › ISIS Jihadists Tries To Capture Young Christian Girl, She Takes Out A Machine Gun And Slaughters Five Of Them. There Is Now A Major Christian Militia With American, Australian, And British Christians All Working Together To Destroy ISIS

By Shoebat Foundation on February 28, 2015 in Featured, General

Speaking in his ancient language, the Aramaic, the language of Jesus, this unnamed Assyrian fighter gives his testimony about what happened in that fateful day when ISIS entered the Assyrian Christian villages at the banks of the Khabur river near Hasaka. He speaks of valiancy and how they fought against all odds.

We thought that the story would help for the Christian west to connect with the Christians of the east. So Shoebat.com translated this never seen before testimony for our western friends to show a story of valor, heroism and the eastern Christian style ‘band of brothers’, and sisters, of course. He recounts the story of one Christian sister, Widad, an Assyrian Christian female fighter and how she single-handedly killed 5 ISIS terrorists before she herself was martyred. His story touched us and it will also touch you. (note: there was an error in the translation “Widad killed have of them” should read “Widad killed five of them”)

“Don’t spread lies” he tells his relatives in America, his village is not gone, even if it is, for he is returning “victoriously”.

To an eastern Christian fighter, the village is everything and death is much more preferred than molestation. The unnamed Christian fighter prefers his grand daughters who were captured by ISIS to be killed rather than to be sexually assaulted. This is the bottom line. It is not “at least I am alive” mentality that is common in the West. Western conservatives by eastern standards are very liberal. Dennis Prager here says that him remaining alive is more important than his wife getting raped:

Martyrdom is the highest honor in the Christian East. Just watch the 21 Copts with their last words “Ya Rabbi Yasou'” (My Lord Jesus Christ).

Land and virginity in the Middle East is everything. Your village is where your ancestors were born. This community is one of the oldest communities in Christendom.

Despite the over three hundred Christian hostages taken by ISIS, it is not all bad news, since Kurdish and Christian fighters have launched a counter attack on ISIS and regained Tal-Hamis.

The counter offensive was done to avenge the death of a fallen Australian soldier, Ashley Johnston (Heval Bagok Serhed) who was martyred in Iraq while fighting ISIS which Shoebat.com were the first to report his martyrdom in English. The Kurds, for his sake, posted images of rows of dead ISIS terrorists.

The unnamed defender speaks highly of the Kurdish fighters who are Muslim, nevertheless, they fight side by side with Christians. And at times, East meets West when valiant western fighters join in, Crusader style.

Ashley Johnston is from Queensland, 28, was martyred on February 24th, while fighting ISIS in northern Iraq alongside the Kurdish People’s Protection Unit (YPG) and trying to liberate the ISIS-held town of Tal Hamis in Syria. The liberation is now complete and ISIS has fled the area. ISIS is not invincible and most of the YPG posted photos on Facebook of female soldiers smiling, hugging and posing with the peace symbol in front of rows of dead bodies. They say the attack was to revenge the death of an Australian soldier. It is here where east meets west. 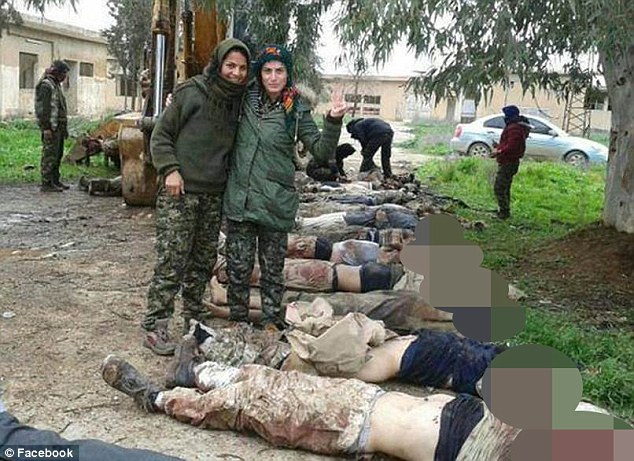 The YPG shared the images and celebratory message on their ‘Lions of Rojava’ Facebook page, in the name of Ashley Johnston, his family and for Australia. 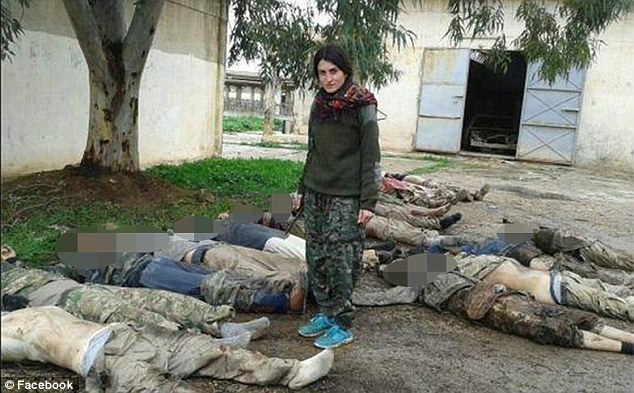 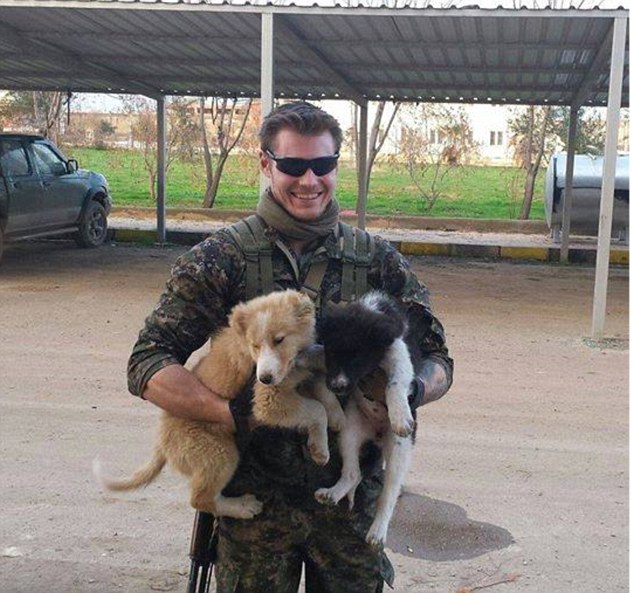 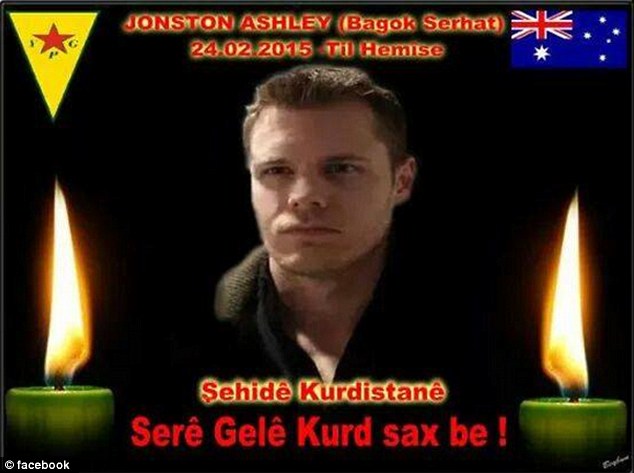 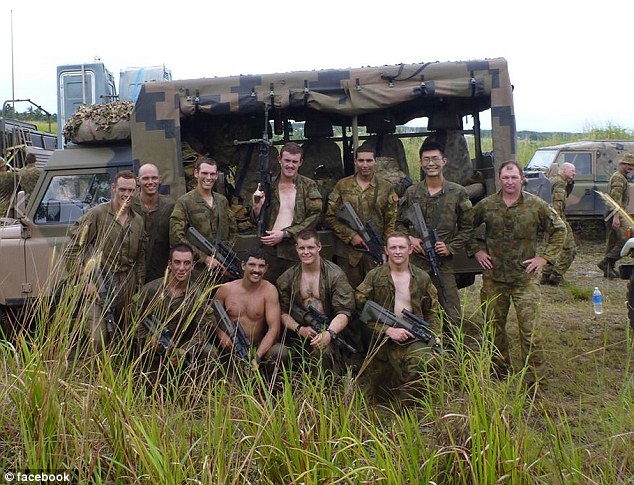 Ashley Johnston (front, second from right) has been remembered by his friends as the ‘best mate’

‘They were massively outnumbered and outgunned but fearless in the face of this as they knew another ISIS death meant saving the lives of countless civilians. He was a fearless and exceptional soldier as well a great man,” the Facebook statement read.

Jamie Read from Lanarkshire, Scotland, served in the British Army for four years before traveling to Syria in 2014 to join the battle against ISIS.

Last August, a hairdresser from south London, known as Mama Kurda, 26, from Croydon, was reported to be the first Briton to travel to fight alongside Kurdish forces. 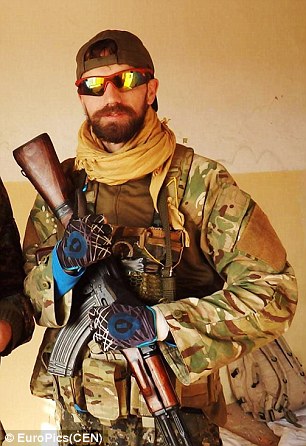 Warrior: Jamie Read from Lanarkshire, Scotland, served in the British Army for four years before travelling to Syria in 2014 to join the battle against ISIS. 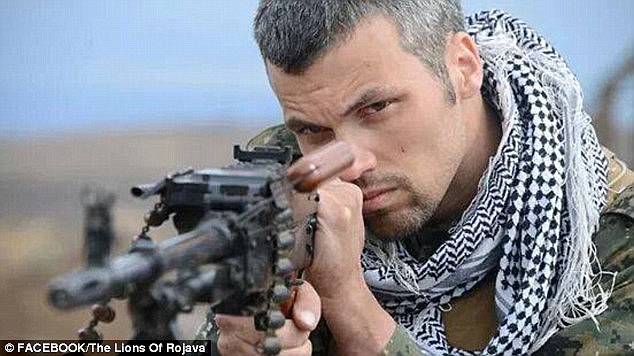 Jordan Matson, a former soldier for the US Army, is another American serving in the fight against ISIS.

Two women, Canadian Jew Gill Rosenberg, 31, and Danish Kurd Joanna Palani, 20, have also reportedly travelled to fight with the Kurds, inspired perhaps by the images of female fighters on the front line against Islamic State terrorists.

ISIS Nothing More than Turkey’s JUNKYARD DOG and Obama is Helping to Feed It
AUSTRIA reforms its 1912 ‘Islam Law;’ Muslims outraged
Follow