By Shoebat Foundation on March 7, 2015 in Featured, General

Footage surfaced on the Internet Saturday of the bodies of eight men described as pro-government volunteers hanging from a bridge in Hawija, 75 kilometres north of Tikrit.

The eight dead bodies hang from a metal frame in the Iraq’s Kirkuk province in Islamic State is the latest public display of barbarity. The gruesome images which emerged on social media show the men’s limp bodies suspended from their feet off a tall structure in the town of Hawija.The notorious black flag used by Islamist groups like ISIS is displayed above them as horrified onlookers inspect the scene. The canopy says “The Islamic State, A Caliphate Upon The Prophet’s Doctrine. Karkuk Province Welcomes You”. 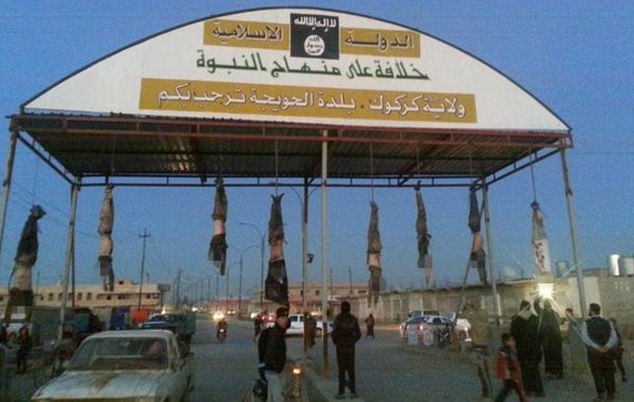 Barbarity: Eight men were found hanging from their feet in the Iraqi city of Hawija in the militants’ latest public display of death 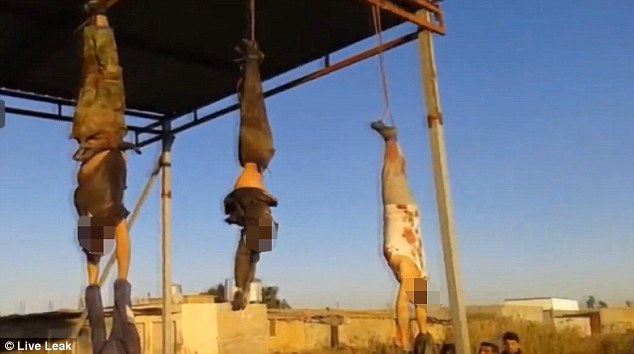 Gruesome: The dead men were suspended from a tall structure in the same city that Syrian soldiers were paraded through the streets in cages 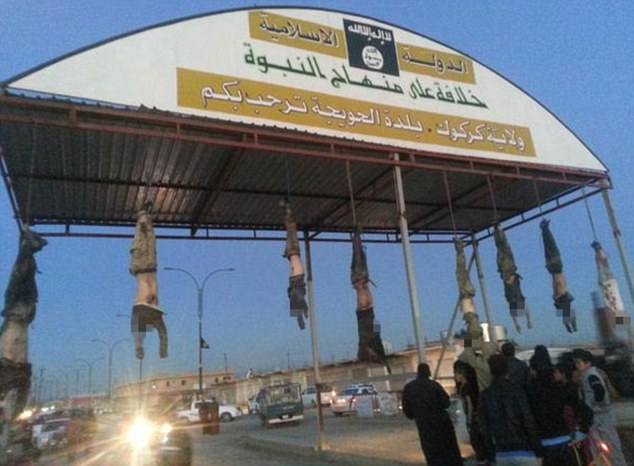 The canopy says “The Islamic State, A Caliphate Upon The Prophet’s Doctrine. Karkuk Province Welcomes You” with the hallmark of terror, the notorious black flag used by ISIS 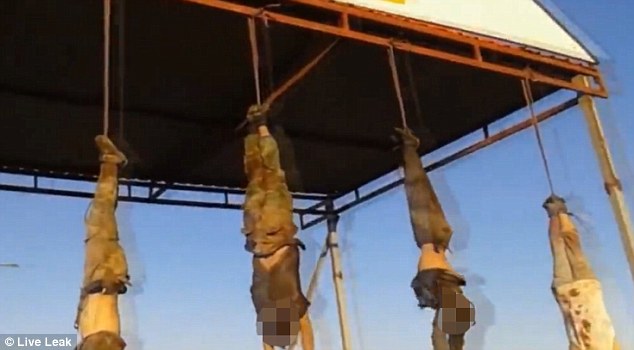 Death: It is unknown whether the men were Iraqi soldiers, as ISIS’ presence in the northern-Iraqi city grows

It was seen as revenge against the Kurdish forces who dragged the bodies of ISIS fighters through the streets of northern-Iraq earlier that month.

Previous reports suggest he is an Iraqi national from the town of Almere and the heads once belonged to members of the Syrian army whom the militants captured and beheaded.

The extremist group has established a firm foothold in what was once an oil-rich Kurdish stronghold of Kirkuk.

ISIS has been preparing a new base for its deadly operations in Hawija as the United States train Iraqi troops for an invasion to retake Mosul, the International Business Times reports.

Some of the deceased men appear to be wearing military fatigues but it is not known if they were Iraqi soldiers. An ISIS fighter believed to be Abu Al-Rahman poses triumphantly in one of the pictures – giving his index finger salute in front of a bloodied victim’s corpse. 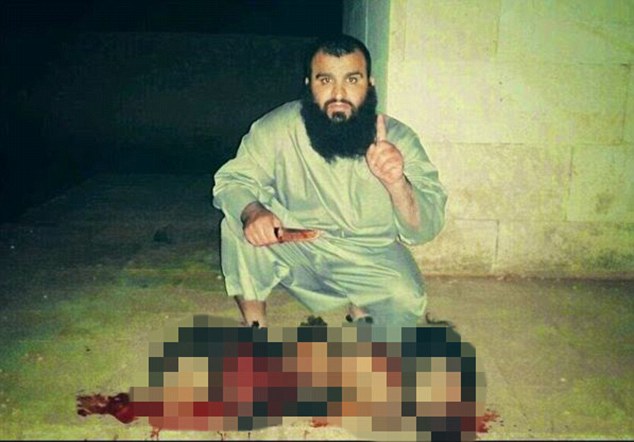 Terrorist: The man pictured posing alongside the suspended men is believed to be Abu Al-Rahman 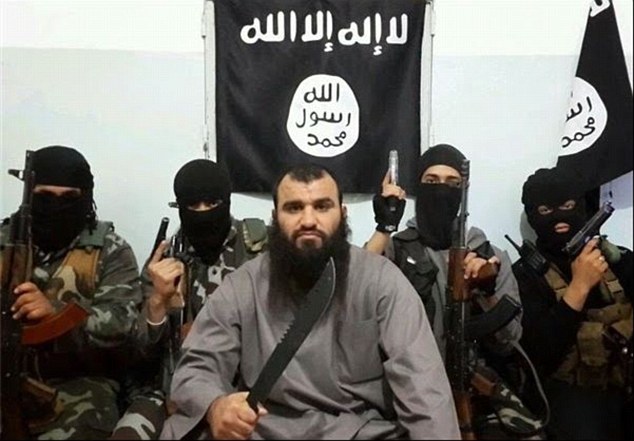 Islamic State: The same man has been previously been pictured alongside armed, masked fighters believed to belong to ISIS 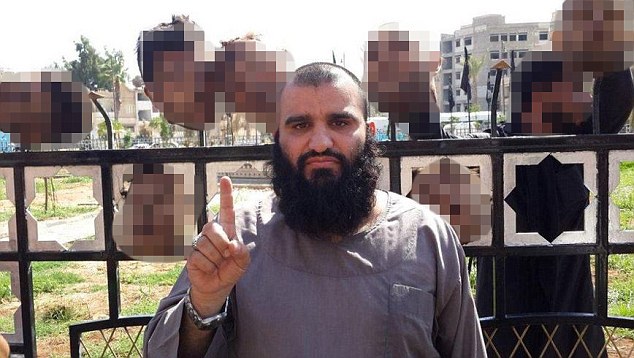 History of terror: Al-Rahman has also been photographed giving the one-fingered ISIS salute in front of several decapitated heads

Hawija is a predominantly Sunni Muslim town which lies off a major highway leading to Mosul and the capital Baghdad.

Since ISIS first invaded the city in June 2014, it progressively conquered neighbouring villages until it gained enough support from locals to establish its new headquarters there. Over the last nine months, its main base in Iraq has been in Iraq’s second-largest city Mosul which it took over last year.

It has offered Islamic State a military advantage due to its proximity to the Syrian border, which allows them to smuggle both weapons and soldiers. But a US-led coalition has attacked the city with airstrikes for many months – targeting ISIS convoys and weapons stores.

While Iraqi forces faced tough resistance from jihadist fighters around Tikrit Saturday, top US military officer said that victory was only a matter of time which Shoebat.com obtained some amazing footage of the battles:

Iran has actively and visibly supported Baghdad’s biggest operation yet against ISIS, but General Martin Dempsey insisted US air strikes north of Tikrit had been key.

Atrocities are not only an ISIS phenomenon in the battle over Syria and Iraq. This week, a leaked video by fighters from the so-called Iraqi militia fighting ISIS executed an 11 year old boy with bursts of bullets in Diyala province in Iraq. Shoebat.com was able to obtain the footage showing a child in handcuffs being brutally beaten while surrounded by a group of Iranian backed Iraqi fighters, then executed the child with showers of bullets on the head.

The outcome in Iraq, despite of victories against ISIS is that militias who have providing the essential service has become a plethora of new and old pro-Iranian Shiite militias that are dominating the battlefields in Iraq and Syria which raises concerns about the growing Iranian influence. The growth of these groups — known as popular mobilization units — poses a conundrum for the Obama administration. These are Iran-backed groups who are providing most of the “boots on the ground” that are pushing back ISIS forces from key areas near Baghdad, including Diyala province where the militia also commits atrocities against the Sunni population.

The evidence on the ground is beginning to reveal a simple observation: who today is leading battles in Salahuddin Province to recover Tikrit from ISIS: the Iraqi army or the Iranian Revolutionary Guard and Shiite militia crowd who like ISIS are also running Iraq amok.

P.S: Please consider the serious issue on Christian persecution which will increase as we see these events unfold. we operate a very effective mission in rescuing fellow Christians. We are a unique organization (Rescue Christians) who rescue Christians, perdominately in Pakistan that live under the Muslim yoke baking bricks in kilns under the heating sun. Christians in Pakistan are also burned in furnaces. To see an example out of the thousands we rescue, click here, and listen to the amazing testimonies first hand on how you can help and make a difference, now in this life and for eternity.