You are here: Home › PEACE IN OUR TIMES: Turkey And Israel Are Making A Peace Treaty While The Christian Prepares For Spiritual WARFARE

By Walid Shoebat on February 29, 2016 in Featured, General

Rejoice everybody, its Hudna in our times! Its Time For A Falafel Party, Hookah and Baklava!

Israel and Turkey are nearing a peace agreement.

“Israel and Turkey will publish a statement about this in the coming days” said Foreign Minister Mevlut Cavusoglu.

‘Peace in our times’ to soon be announced.

And in Aleppo, Syria, we are also witnessing ‘peace’ since the dramatic decrease in airstrikes around Syria’s rebel-held territory. A truce (hudna) was negotiated between Syrian rebels and the government went into effect. Ever wonder why you have not heard much from ISIS lately? They alone are being plummeted and have little time for major creative Daeshwood productions.

The two countries, Israel and Turkey, have been negotiating fervently for the past few months, attempting to put everything behind them from Mavi Marmara to Gaza.

Current Mossad Director Yossi Cohen was spotted traveling to Turkey in January alongside Prime Minister Netanyahu’s advisor for Turkish affairs where the two reportedly met with the Director Gerneral of the Turkish Foreign Ministry, coming to an understanding on several issues.

Also, a recent meeting between Turkish President Erdogan and a delegation of 20 Jewish-American leaders at his Ankara palace. The delegation was led by Executive Vice Chairman of the Conference of Presidents of Major American Jewish Organizations Malcom Hoenlein, an associate of Israeli Prime Minister Benjamin Netanyahu. Of course, Erdogan entertaining major Jewish figures with Kabobs did the trick.

The whole thing busts the myth that Jews are the smartest people in the world. Smart and Wisdom are not compatible. Peace is only derived when the Muslim denounces Islam. 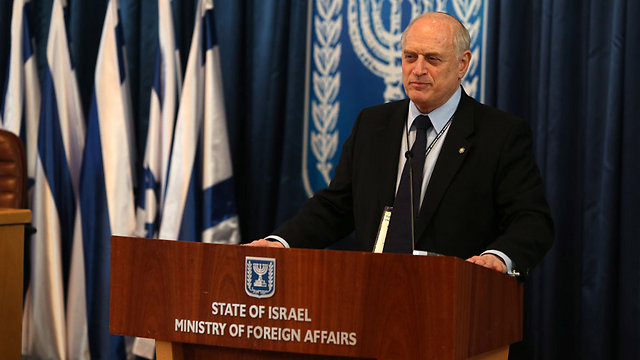 Malcom Hoenlein. Headed a delegation to Turkey. (They always look so smart)

This is always the case that the Muslim reserves his oldest card: Hudna, a peace treaty that cannot last long, all the while he plots for war. And while everyone talks of ceasefire and ‘peace in our times’, proof of Turkey’s increased military presence on the Syrian border was leaked filmed with fortifications and tanks on the Syrian frontier:

The barrels of the tanks and self-propelled guns are pointed in the direction of the mainly Kurdish Syrian city of Kobane in Syria.

Turkey is hurting. In the beginning of the Russian-Turkish conflict, Mehmet Simsek, the deputy prime minister responsible for Turkey’s economic policies, stated that Russian economic sanctions would not have any — or at least only limited — effect on the economy. Erdogan was trying to ignore any such economic effects by saying that nothing would happen, even if natural gas were to be cut, because Turkish citizens are used to coping with difficulties.

This, as it turns out, was completely false.

The sanctions caused major problems and bankruptcy in the tourism, construction, food and textile industries, and a chain reaction in banking sectors on the day the sanctions became effective Jan. 1 — this despite the fact that Putin had not yet played his strongest trump card: energy.

Turkey has reached the point of losing its economic relationship with Russia, which in 2013 was the fourth major importer of Turkish goods and was second in volume of trade volume with Turkey. In the last two years exports decreased by 50%, first because of Russian economic issues due to Western sanctions, and then in part because of Turkish-Russian tensions. Exports decreased to $3.5 billion while the volume of trade decreased by 25%.

The main sectors that have been affected by Russian sanctions are food and agriculture. Exports to Russia regressed 56% compared with the same period a year earlier.

The business world and the government presumed that the Russia crisis would be temporary and would ease in time keeping away economy from political relations. All these predictions were false. The sanctions of Russia and its regional allies will last for long years and will leave permanent damage unless Turkey calls for peace and they will.

Turkey still demands to lift the naval blockade of Gaza, and the Israeli demands regarding Hamas activity on Turkish soil.

The Muslim will capitulate, temporarily, in accordance to Hudna, the Jew says ‘peace in our times’ while the Russian reserves his views and does not trust anybody, especially the Americans. We have seen this type of thing since the days of Muhammad and Quraiysh.

Hamas commented on the Israeli-Turkish talks, stating they hope an agreement is signed. The terrorist organization claims that such normalization will allow a port to be built in Gaza.

From as far back as 2011, folks can click here to see what we predicted “Hamas Will Recognize Israel“.

Mark our words, Hamas will soon make this official. Never think that the Hamas terrorists and the Turks are not talking, planning and of course do what they do best: scheming.

Without linking to the true God, everyone is stupid. Today we see the stupid Jews, the stupid Turks, stupid Hamas, all think they are smart. And then we have the wise monk who sits in a monastery interceding for all these stupid sins. He eats bread and salt while he carries his cross. He knows that in time mankind will bow to Christ, while the world thinks his ascetic lifestyle is stupid.

In this world there is true peace and false peace. There is the real and there is the fake. The devil provides his fakery as when Pharaoh with his snakes. But then came Moses and showed what was real. This division between real and fake began from as far back as Cain (fake sacrifice) and Abel (real sacrifice).

Even in the Christian circles, we find the real and the fake. Fake charismatic experiences, fake prophecies and fake utterances. But then there is the real: Théōsis, which the monk very much recognizes the difference. The true Théōsis is only experienced through an ascetic lifestyle with continual prayers and repentance, while the fake charismatic is sold from wealthy pulpits where the snake oil salesman sits on golden chairs promising health and wealth selling you fake blessings for money.

“Christ rode a donkey, not a limousine” where my words to Paul Crouch when he sent the fancy chariot (limousine) for an interview on his show. It was my first alarm bell that something is wrong. I see no humble donkey.

Seek Théōsis and not charismania. It is becoming heavenly through the process of becoming free of hamartía (“missing the mark”), an issue I have always suffered before I consumed the real communion.

This is not to be confused with being free of hamártēma “becoming free of sin”. Théōsis can never be unless the Christian continually partake of Christ’s literal body through communion and continually confessing their sins: “if we confess our sins, he is faithful and just, and will forgive our sins and cleanse us from all unrighteousness” (1 John 1:9). The whole salvation process is that man (Adam) sinned and was cast out and the process is to attain through the Holy Trinity to get back to original perfection. Abel got it while Cain didn’t.

Recognize the true Messiah for He comes to you riding on a donkey, not a limousine promising peace, health and wealth.

This is wisdom. It is only then when evil is completely defeated, that the wolf will live with the lamb, the leopard will lie down with the goat, the calf and the lion and the wise monk with the wild bear.

Watch Leftist Reporter Getting Choke Slammed At Donald Trump Rally
The White Man Had Enough And Is Why Donald Trump Will Scoop The Votes Tonight. Like It Or Not White Preference Will Be Why Trump Will Win The 2016 Presidential Election.
Follow