You are here: Home › ISIS Terrorists Fed A Distraught Woman Searching For Her Kidnapped Son Some Meat And Rice – And Then Told Her She Had Just Eaten Her Own Son

By Shoebat Foundation on March 2, 2015 in Featured, General

Yasir Abdulla, 36, of Yorkshire left his wife and four kids to battle the maniacal extremists in his Kurdish homeland tells a horrifying tale:

“I hate ISIS because of what happened to an old Kurdish woman from a nearby tribe,” he said. “Her son was captured by ISIS fighters and taken as a prisoner to Mosul. She was determined to find her son and went to ISIS headquarters and asked to see him.” 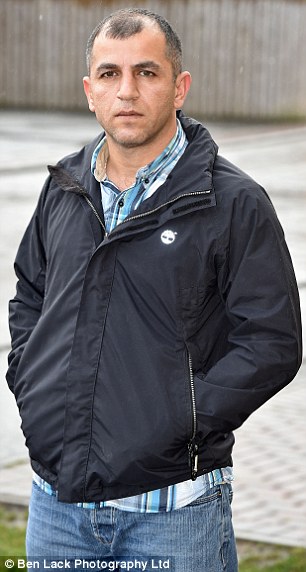 He said the thugs told her to rest after her long journey and offered her the food before taking her to her son.

“They brought her cups of tea and fed her a meal of cooked meat, rice and soup. She thought they were kind,” he said.“But they had killed him and chopped him up and after she finished the meal and asked to see her son they laughed and said, ‘You’ve just eaten him,’”.

“They dig a trench, put dry tree branches and leaves in there, set it alight and then throw prisoners on so they burn alive,” he said. “IS are very good at making people scared. If they make one person scared then that person will make another person scared and soon everyone is scared of IS.”

The story is quite plausible. Here is an incident that exactly describes what Abdulla said:

While the video above makes an ironclad case regarding such barberity  (we all have seen ISIS burning Jordanian POW Muath Al-Kassasbeh), except, this video was not even ISIS but was carried out by the “moderate” Free Syrian Army. Such horrors are hardly an ISIS ‘exclusive’, the very Free Syrian Army which Obama signed into order to train 5000 more partnering with Turkey carried out the exact atrocities ISIS does and worse.

We wrote on how the Free Syrian Army was selling Christian blood, and many accused us of ‘blood libel’. We wrote on Kuru disease (which can only be contracted through cannibalism) in Syria, and we warned about Islamic cannibalism and rituals and even included videos of the human slaughterhouses showing how these savages process them as if they were cattle and few in the media covered the story. All was carried out by the ‘moderate’ Free Syrian Army. We reported on the Free Syrian Army in Syria barbecuing a human head, and of course they said it was fabricated. So we brought photos to prove it. This was of two heads of Syrian soldiers being boiled in the Daraa prison in Syria. The Free Syrian Army jihadists took over the prison, decapitated two soldiers and cooked their heads.

Shoebat.com last year reported a similar story in an exclusive Shoebat.com video of Sister Hatune Dogan, an Eastern Orthodox nun who rescues Christians, recounting how a Christian boy in Iraq was beheaded, his head fried and cooked with vegetables and rice, and the pot which the head and food was in, was placed in front of the mother’s doorstep and it was not done by ISIS:

And now we have Yasir Abdulla, a security guard from Keighley, West Yorkshire decided to go to Iraq and fight against ISIS. 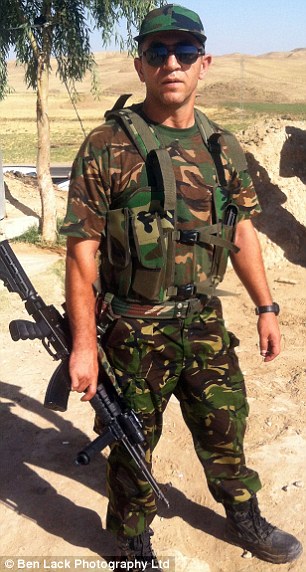 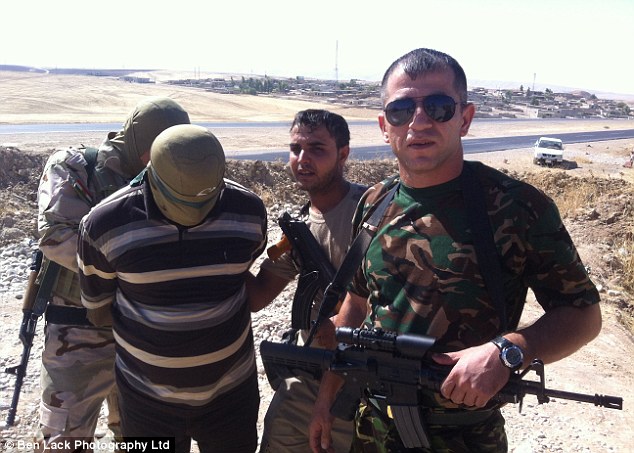 On patrol: Mr Abdulla (right) pictured with an Islamic State fighter who he and others had detained 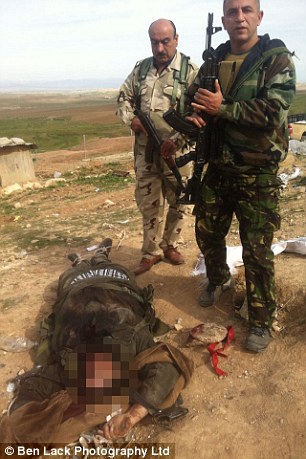 Slaughter: Mr Abdulla with a member of ISIS who he said was killed after he beheaded a Kurd

But is what even Abdullah saying and what we are saying all is exclusively ISIS and the Free Syrian Army?

Fact is, such savagery is from Islam itself. When we see in Iraq ISIS shooting men and throwing them in the river or when we see ISIS executing 21 Copts to show the beach flowing with human blood, this gore  comes from the very spring of Islam beginning from its inception.

CAPTION: The War Of Killing Christians Is Between The Followers of The Merciful One And The Cross Worshippers

It was prophet Muhammad’s general, Khalid bin Al-Walid who perfected such horror. The story goes that when Khalid made a vow to Allah during the battle that if he defeated these resistors, he would make the canal that surrounded their village literally run with their blood. When the outcome was in Khalid’s favor, it actually took a day and a half to behead all of the captives. The obstacle for Khalid was that the ravine of blood coagulated and Khalid’s troops were forced to eventually release water into the canal in order that it would run red with the blood of the slain lest Khalid’s vow be left unfulfilled.

Some of Khalid’s men wanted to meticulously fulfill his wishes:

“Even if you were to kill all the population of the earth, their blood would still not run… Therefore send water over it, so that you may fulfill your oath.” Khalid had blocked the water from the canal. Now Khalid brought the water back, so that it flowed with spilled blood. Owing to this it has been called Blood Canal to this day. (1)

Ibn Kathir’s authoritative historical tome, The Beginning and the End  “And he [Khalid] ordered his [Malik’s] head and he combined it with two stones and cooked a pot over them. And Khalid ate from it that night to terrify the apostate Arab tribes and others. And it was said that Malik’s hair created such a blaze that the meat was so thoroughly cooked.”

he eminent Hafiz ibn al-Hajar (d. 1449) who comments that “the deeds of the [companions of Muhammad] evince the permissibility of burning, and the prophet put out the eyes of the men of Urayna with heated iron [he also cut their hands and feet off], and Khalid bin al-Walid burned some of the people who apostatized.”
SOURCES

REFERENCES
(1) At-Tabari, Vol XI, The Challenge to the Empires, In series: The History of at- Tabari, (Ta’rikh al-rasul wa’l-muluk), Translated by K.Y. Blankkinship, SUNY series in near Eastern Studies, Bibliotheca Persica, State University of New York Press, Albany New York, 1993, p.44-45 Abu Jafar Muhammad ibn Jarir At-Tabari, the early Islamic historian and theologian recorded this event “Khalid said, O Allah, if you deliver their shoulders to us, I will obligate myself to You not to leave any one of them whom we can overcome until I make their canal run with their blood.’ Then Allah defeated them for the Muslims and gave their shoulders to them. Khalid then commanded to his herald to proclaim to his men, ‘Capture! Capture! Do not kill any except he who continues to resist.’ As a result the cavalry brought prisoners in droves, driving them along. Khalid had detailed certain men to cut off their heads in the canal. He did that to them for a day and a night. They pursued them the next day and the day after, until they reached the Nahrayn and the like of that distance in every direction from Ullays. And Khalid cut off their heads.”

SHOCK: Identity of ‘Jihadi John’ Helping to EXPOSE Pro-Muslim Motives Behind Wikileaks and NSA Scandals
Shoebat Exposes Hillary’s Clinton Foundation And How It Is Mired in Muslim Brotherhood Connections; Washington Post Up In Arms and Fails To Refute It
Follow