By Shoebat Foundation on July 17, 2015 in Featured, General

When Western commentators have characterized ISIS’s crimes as “unique,” and “no longer practiced anywhere else in the civilized world,” they tell a myth. Fact is, next door to the U.S., is a major narco-terrorism problem. While their goals are different from ISIS, methodologies contrast greatly. And while authorities across North America embark on an epic manhunt for Joaquín Guzmán Loera, the kingpin better known as El Chapo, experts say an even more dangerous figure is on the loose named Nemesio Oseguera Cervantes nicknamed El Mencho.

The two narco-terrorist kingpins, El Chapo and El Mencho, are just as dangerous as Ayman Zawahiri of Al-Qaeda and Al-Baghdadi of ISIS.

While many will take offense at the comparison, perhaps they need to refute the facts. It is not only ISIS that can hold entire cities captive, terrorizing entire populations, El Mencho (who is way more dangerous than El Chapo), orchestrated the bloody siege of Guadalajara, the capital of the State of Jalisco.

Similar to how ISIS operates, the New Generation Cartel in Mexico seeks society’s approval as a “righteous” and “nationalistic” group, as can be seen when El Chapo threatened Donald Trump for his remarks on Mexicans claiming that he gives people more jobs than the “pinche” (damned) Mexican government.

This is the reason why so many illegal immigrants from Mexico express on how El Chapo is “for the people”. The Robinhood effect is similar to what we see in the Middle East. Mexico has evolved like Colombia but with a new more dangerous generation with the rise of paramilitary drug gangs.

The military equipment, splits, the turf warfare, torture and killings all mimics what we see with Al-Nusra, Al-Qaeda and ISIS. Just as when Al-Qaeda’s Abu Musab Zarqawi split creating the embryo of what became ISIS, in Mexico it was in 2009, a split began when the military killed Ignacio Coronel Villarreal, of the Sinaloa cartel federation which created a power vacuum and the Milenio emerged and broke into smaller factions while others left the Sinaloa cartel and formed the group La Resistencia (The Resistance) with an alliance with Los Zetas drug cartel.

Like ISIS, which began to suppress all other smaller terror networks and then took over major cities in Iraq, in the spring of 2011, the Jalisco New Generation Cartel declared war on all other Mexican cartels and stated its intention was to take control of the city of Guadalajara where they blocked thirty some roads, entered the city with RPGs, took down a military helicopter, and lit ATMs and banks on fire.

In fact, there is little difference between Islamic terrorism and the Mexican narco-terrorism. From the way they pose, their equipment, terror tactics, spiritual  recruitment, child recruitment, elaborate recruitment strategies, public support, financial funding,  gruesome images, alliances, partnerships … the United States, in reality, has an ‘ISIS’ south of the border.

And if one argues that ISIS is not into drugs, fact is, ISIS, just like the cartel, is profiting off of a whole “portfolio” of illegal activities, including human trafficking and slavery, pirating information technology and also major drug trafficking.

And if ISIS was created to consolidate all Jihadi terrorists, the Jalisco New Generation Cartel (CJNG) was originally created to benefit El Chapo of the Sinaloa Cartel to eliminate the Zetas in Jalisco and Veracruz hence the name, they were tagged with Los Matazetas (The Zeta Killers).

Even the way ISIS minted their name by creating public fear, in September 2011, the CJNG tortured and executed 35 people and dumped their bodies on a busy highway in Boca del Rio, Veracruz.

El Mencho hasn’t gotten much press outside Mexico, but his Cártel de Jalisco Nueva Generación have expanded territory from coast to coast and punched its operations right through U.S. borders becoming the most global of all the Mexican suppliers.

And as far as casualties, perhaps some number comparisons might help some understand the seriousness of the problem. Just imagine Jordan, next door to Syria as the U.S. to Mexico, the death toll in Syria reached 191,000 significantly alarming Jordan, to the U.S., south of the border in Mexico, there were 120,000 people who were killed as result of narco-terrorism between 2006 and 2012. (1)

And just as the ISIS mayhem spilt into Jordan, in the United States, from 2006 to 2010 as many as 5,700 Americans were killed by cartel-fueled drug violence. This would be about 5-10% of the casualties in Mexico.

One might argue that the death toll in Syria dwarfs Mexico’s, but when comparing with Iraq, Mexico is even worse. A recent United Nations report estimated that in 2014, nearly 9,000 civilians have been killed in Iraq since ISIS seized large parts in northern Iraq in June while in 2013 Mexican drug cartels murdered more than 16,000 people. This, while it is known that the Mexican government deflates the actual death toll by about 50 percent. This would make the number as high as 32,000. This makes Mexico four times worse than Iraq. When Donald Trump brings the issue at the forefront, the question then becomes, would any American want to move close to the Iraqi borders, and would any sane mind open the floodgates of immigrants from a nation like Iraq without proper screening?

Like ISIS, in Mexico, hundreds of beheadings are carried out every year including dismembering and mutilation, displaying piles of bodies in towns to terrorize the public into submission. And just like ISIS, the cartels use social media to post graphic images of their atrocious savegry. The images coming out of Mexico are no different from what we see from ISIS. The only difference between ISIS and the drug cartel is that American drug addicts fund the ISIS next door. 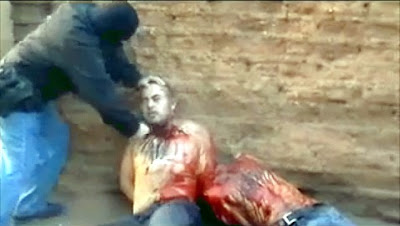 This is from Mexico, not Syria or Iraq

This is from Mexico, not Syria or Iraq

Far from being a south of the border problem, the Mexican drug cartel operates in 1,000 U.S. cities.

The Mexican cartel, Los Zetas, is particularly prominent and hazardous to the United States since they partnered with Transnational criminal organizations (TCO).

And with the Obama concessions to Iran’s nuclear issues, the Hezbollah (“Party of God”), Iran’s terrorist group in Lebanon, the problem even compounds. Hezbollah is a Shia terrorist group that advocates Shia empowerment on a global scale with their loyalty has always been to the cleric regime of Iran and the Ayatollah Ruholla Khomeini. Hezbollah were behind the suicide truck bombings of the U.S. embassy in Beirut in April 1983, the U.S. Marine barracks in Beirut in October 1983, and the U.S. Embassy annex in Beirut in September 1984 to name a few. It also runs one of the largest most complex and sophisticated criminal networks in the world.

But Hezbollah is not active only in the Middle East. It has created a criminal syndicate of drug trafficking through some of Mexico’s most well connected global drug dealers, especially the Los Zetas. This new partnership has assisted in laundering between $850 and $900 million. Los Zetas is “the most technologically advanced, sophisticated and violent” (Hesterman, 2013, p.142) and has already infiltrated 230 cities in the United States by 2008 and the number rose to more than 1,000 U.S. cities by 2010, according to the U.S. Justice Department.

And if ISIS survives by drug and oil money, Los Zetas have “siphoned $1billion dollars in fuels from state-run oil producer, Pemex through their pipelines” (Rosenthal, 2013).

The ISIS style mayhem is not so far away, it is just south of the border and in fact is already within the United States.

SOURCES
(1) While some report 60,000, Trans-Border Institute, which publishes an annual report on drug-related violence in Mexico, estimates the total number of homicides during the administration of former President Felipe Calderón (2006-2012) to be around 120,000 to 125,000. See here.

The Man Who Murdered Four Marines In Chattanooga Was A Palestinian Muslim Terrorist Who Was A Cage Fighter And Is Now Being Praised By Muslims In America As A Hero Of Islam
The Disturbing Manifesto Of The Muslim Who Murdered Four Marines In Chattanooga Just Got Released, And It Reveals A Sinister And Dark Plan To Slaughter Americans For The Cause Of Islam
Follow