Just as the world witnesses the Star of Bethlehem, Israeli authorities said Wednesday they have identified a rare, well-preserved 2,000-year-old Jewish ritual bath hidden under the floorboards of a home in Jerusalem’s Ein Kerem which according to Christian tradition, John the Baptist is said to have been born in that Jewish community around Ein Kerem during  the first century. The discovery adds to the physical evidence of the Jewish community in the area which practiced Baptism as written in the New Testament. 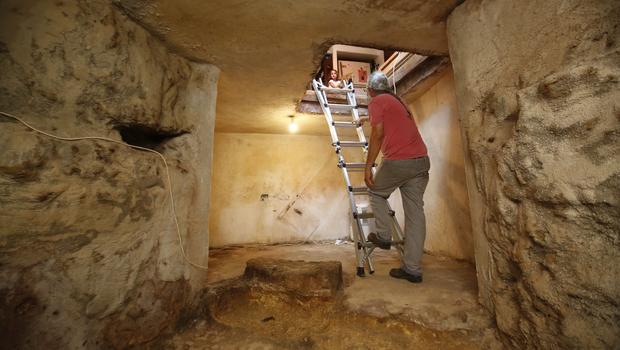 Tal descends a ladder from his living room on July 1, 2015, leading to an ancient Jewish ritual bath (mikveh), dating from the Second Temple Period and believed to be over 2000 years old.

Archaeologists said the discovery in Jerusalem’s Ein Kerem neighborhood shines new light on ancient Jewish and early Christian communities in the area. But the discovery might be most noteworthy because the couple that owns the home literally kept the treasure hidden under a rug for three years before choosing to come clean.

In an interview, the wife said the family found evidence of the mikveh, or Jewish ritual bath, while renovating their home three years ago. Construction workers were using heavy machinery that sunk through a hole, leading the crew to discover the bath.

She said that she and her husband were unsure of the significance and continued with the planned construction. But they also preserved the discovery, adding a pair of wooden doors in the floor to allow access to the bath and concealing the entrance with a rug.

The couple’s curiosity, however, persisted. Earlier this week, they contacted the Israeli Antiquities Authority and reported their finding. The family asked that their names be withheld to protect their privacy.

Amit Reem, an archaeologist with the authority, estimated the ritual bath dates back to the first century B.C., around the time of the Second Jewish Temple. The bath remains largely intact, and includes a staircase leading to what was once a pool. Archeologists also found pottery and unique stone vessels dating to the same period.

According to Christian tradition, John the Baptist is said to have been born in the Jewish community around Ein Kerem around the first century. Reem said the discovery adds to the physical evidence of the Jewish community in the area, which he said has been “sporadic.”

Reem said it is not uncommon for households around Jerusalem to unearth Jewish antiquities under their floorboards, though he did not know how many cases there were. The family does not have to move and will keep the ritual bath preserved with the help of the Antiquities Authority.