You are here: Home › Leaked Video Shows Turkey Sending Floods Of Jihadis To Syria And All Hell Is About To Break Loose

Jarablus is on the western bank of the Euphrates river. It is the last significant town held by ISIS on Syria’s border with Turkey. After Syria cleansed the border areas from ISIS, now Turkey is rushing through Jihadis they import from all over the Sunni Muslim world into Syria as leaked videos reveal:

What you see above in the video is the daily influx of Jihadis right at the Syrian border and Turkey is sending in with them all sorts of military aid and mine clearing equipment. According to local sources, the Turkish force of military vehicles and heavy equipment accompanied with mine detection and mine removal equipment has been sent in to clear the runway for Turkey to cease control of the area. After crossing the border, Turkish soldiers moved westwards within the Syrian territory.

Sources also reported that ISIS were all unresponsive to the activity by Turkey, and just watched them go by doing their business. According to another unconfirmed report, a Turkish troop of thousand soldiers has now been deployed on Syrian land close to the border. 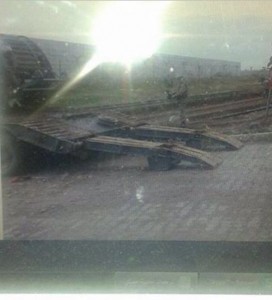 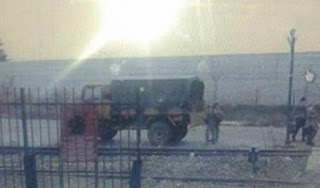 So lets examine whats going on here. Turkish Foreign Minister Mevlut Cavusoglu said Monday that his country is “determined to fight ISIS inside Turkey and in Syria” after a youth blew himself up killing at least 54 people at a Kurdish (not Turkish) wedding party. So Turkey now supposedly cares about Kurds and is why they are sending Islamists inside Syria to (again, supposedly) destroy ISIS? The red dragon, Turkey, the top killer of Kurds now cares a lot about Kurds.

Since July 15th coup, the breath of the red dragon is beginning to smell with fire and brimstone in everything it does. Even Tehran which had allowed Moscow to carry out strikes against Sunni Islamists in Syria is no longer the case. Russians were killing Free Syrian Army (the Sunni terrorists sanctioned by U.S. Food and Drug Administration)  as well as ISIS (cancerous by U.S. standard). To Russia it made no difference since both are Sunni Islamist. But then the Tehran government criticized Moscow and things went sour between Russia and Iran. So Russia just pulled out of the Hamadan base in Iran. The Azaz corridor has become the epicenter since it connects the eastern part of Aleppo, currently under rebel control, with Turkey.

Vladimir Putin wants all Sunni Islamists out of Syria. The U.S. goal remains securing the Marea-Jarabulus corridor from ISIS. Turkey tells them that they will do this by introducing the less tainted Islamists into Syria and is simply importing Jihadists and exporting them to Syria.

A photo from last year (see above) perhaps can explain the Caliphate (for American dummies). It is from the customs office of Syria’s Jarablus border gate (photo August 1, 2015). The Turkish flag is this red dragon with crescent horn you see flying over the Karkamis border crossing. Right across from it is showing an ISIS flag, which is the black flag of the Mahdi who leads the Red Dragon. The latter (ISIS) is simply confused and does not understand that it is Erdogan and not Baghdadi who is the rightful Caliph and Mahdi sent by Allah to rule mankind and Jinn (demons).

The situation is turning messy as the U.S. sticks its nose in the middle. Turkey, this red dragon, wants to enter Syria by any means. So it is importing all sorts of Muslim renegades from all around the globe and is spewing this flood into Syria through Jarablus wall to take over what Syria gained from ISIS.

On the other hand, NATO and the U.S (slightly waking up from its slumber) had rejected Erdogan’s plan to establish an isolated zone inside the Syrian borders (they know that it is really an Islamist takeover) to include Syrian refugees in order to prevent the formation of a Kurdish state on its border.

Ankara is planning to stir the issue during the visit of U.S. Vice President Joe Biden to Turkey this week.

It has become a complex problem. On the one hand we have a coordination between Turkey and Syrian Islamists opposition factions (what we normally call FSA). These will replace ISIS Jihadis in Jarablus with another Jihadi army by giving it an FSA stamp acceptable by the U.S. Two masks for the same dragon.

So lets do the math here. Russia on the one hand is fighting all Sunni Islamist factions. There is also the new rapprochement between Ankara and each of Moscow and Tehran. Yet Turkey on the other hand has an obvious alliance with the Islamist Syrian opposition who are enemies of Russia.

Russia is already getting ticked off at Turkey and Iran. This Turkey-Russia peace will not last.

The U.S. on the other hand wants to help the Kurds, yet Turkey, Iran, Syria and Iraq do not want U.S. meddling since establishing a Kurdistan (ancient biblical Medes) would carve swaths of territory out of all their countries. Turkey has been battling the Kurds for decades and do not want them to gain too much of a foothold along its southern border in Syria.

We have us a mess. Turkey is now obviously sending in Islamists with an FSA stamp into Syria via Jarablus border to prevent Kurds control. The U.S. is trying its best to keep Iraqi/Syrian and Kurdish forces from pointing their guns at one another and avoiding aerial dogfights between American and Syrian warplanes over Syria’s crowded skies which they have to share with Russia.

Russians are interested to show they are a superpower to guarantee their share in political future of Syria. The U.S. wants to establish a ‘moderate’ Sunni state out of Syria to thwart Iran while the Turks want to gulp up Syria as Iran gulped up Iraq by establishing a pro-Iran puppet regime. The winners are usually the closer dogs.

CHRISTIANITY HAS BEEN CORRUPTED AND PORTRAYED AS A WEAK RELIGION FOR FAR TOO LONG. ITS TIME THAT WE EDUCATE OURSELVES AND LEARN THAT CHRISTIANITY IS ABOUT FIGHTING AND DESTROYING EVIL. CLICK HERE TO GET OUR 2-DISK DVD SERIES ON CHRISTIAN MILITANCY AND CHRISTIAN WARFARE AND JOIN THE FIGHT TODAY!

The Government Of Japan Plans To Create An Extremely Powerful Military, It Will Be Spending More Money On Its Military Than It Ever Has Since World War Two, Be Prepared For Major War In Asia
Supreme God Allah Gets Busted On Felony Weapons Charges Outside Of Taco Bell (No, We Aren’t Kidding)
Follow